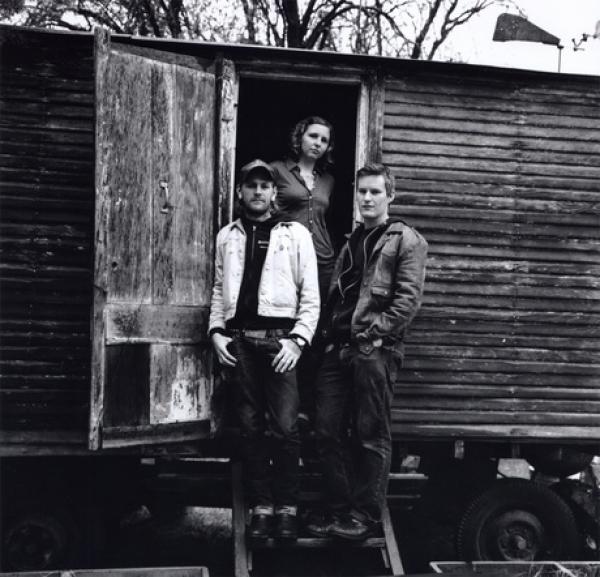 The Devil Makes Three (TDM3) that is. The Santa Cruz based trio played to a capacity crowd at the Tahoe Biltmore’s Breeze Lounge on March 28 and as anybody who has been lucky enough to see them live will tell you, it was a hell of a show! Local artists Jack Up and Jenny from the Rusty Strings and Truckee Tribe opened with a fun set of guitar and fiddle music that had the crowd slapping and stomping long before TDM3 even took the stage. The main event was a filled-to-capacity performance that had the entire room dancing to the encore. Pretty impressive considering this is essentially a string trio with no drummer. The band consists of vocalist and guitarist Pete Bernhard, bassist Lucia Turino kicking and slapping out the beats on the stand-up, and Cooper McBean on guitar and banjo (and just about anything with strings is my guess). This was a stop on TDM3s ‘warm-up’ tour; the real deal kicks off in May in celebration of their first new album in four years, ‘Do Wrong Right’ which is slated for an April 21 release. (Shameless plug: Listen to 101.5 FM to hear our favorite tracks from the new album.) The music is a mix of rockabilly, folk, bluegrass, and something entirely more in line with the energy usually found in punk rock. I think… folkagrassabilly sounds about right. With songs like ‘Aces and Twos,’ ‘Poison Trees,’ and the titular ‘Do Wrong Right,’ TDM3 has crafted a solid album that evokes images of outlaws, broken dreams, open roads, and the lore of Classic Americana, all played with a ferocity and passion that is rarely matched in acoustic music. The album will be available on Milan Records April 21. (milanrecords.com) For tour dates, online ordering, downloads, and updates visit thedevilmakesthree.com.

Dancin’ with The Devil
Community

Dancin’ with The Devil
Sports & Outdoors

Dancin’ with The Devil
Sports & Outdoors
All Day

Dancin’ with The Devil
Arts & Culture