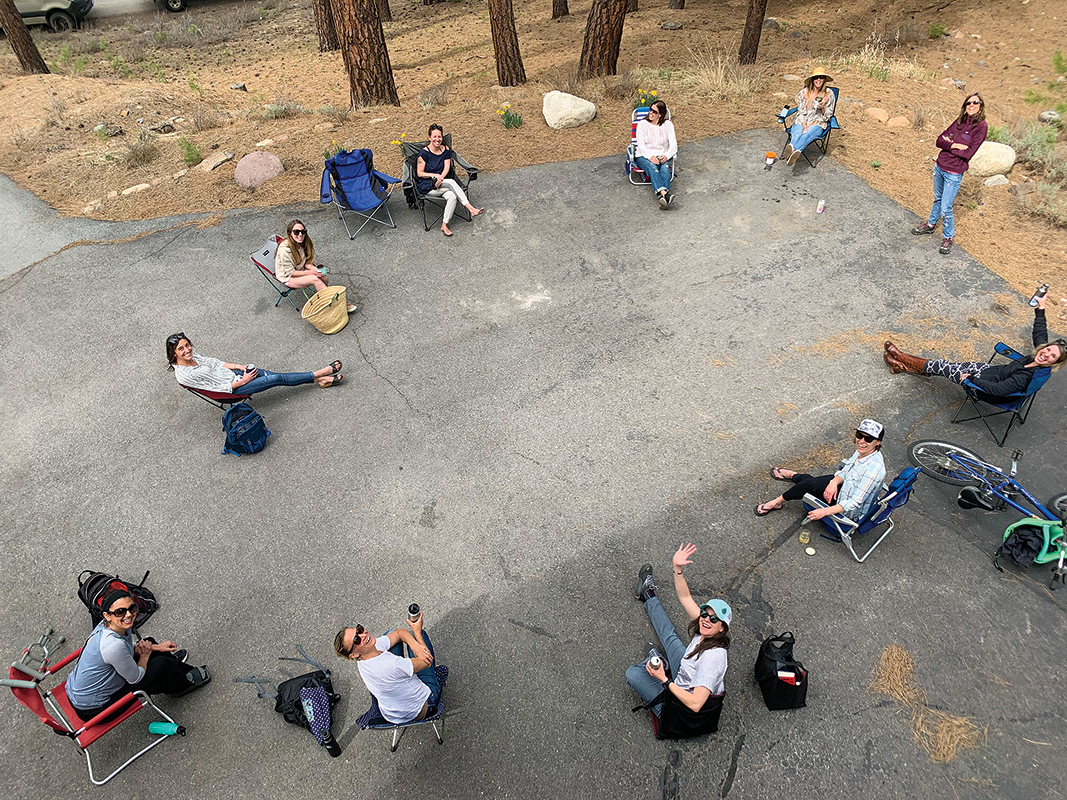 While the Centers for Disease Control recommends that people gather only with folks who reside in their own household, it’s safe to say that we’re all craving social interaction with outsiders. So people far and wide are enjoying each other’s company from afar, taking their neighborly gatherings to the streets or, more accurately, driveways. Good food and libations are the key to success for any get-together, so here are some ideas to satiate your appetite for food and socialization while also supporting local restaurants during this difficult time.

Right about now we can all use a break from the kitchen and a little spice in our lives. So why not kick off your front-yard bash with some zesty Mexican snacks? Grab an order of Nachos con Todo — nachos with everything — from longtime downtown Truckee staple El Toro Bravo. Crisp tortilla chips piled with refried beans, jalepeños, melted cheese, guacamole, and sour cream. You can even add chicken or meat and make it a meal. The new rules permitting alcoholic beverages to be taken to-go make for the perfect excuse to wash your nachos down with a refreshing margarita.

If you’d like something a little more in the way of traditional backyard barbecue fare, grab a few beer-braised bratwursts from Alibi Ale Works. Served with house-made dill and caraway sauerkraut, pickled red cabbage, and beer mustard on a Truckee Sourdough roll, you can have your barbecue and eat it too — without having to fire up the grill. And while you’re there, grab a growler to-go. Beer and brats go perfectly together!

Feeling picky? You can find all sorts of finger foods at restaurants throughout the Truckee/Tahoe area. Za’s Lakefront in Tahoe City puts a seafood spin on traditional poppers, stuffing jalapeños with shrimp, wrapping them in bacon, and topping them with cheese.

If you’re feeling really naughty, Zano’s in Truckee can satisfy any greasy desire you might have. Fried cheese bites, fried pickles, and best of all, fried ravioli. For something a bit on the heartier side, go for a calzone. The more traditional Chicago calzone is a puff of dough filled with meatballs, sausage, and pepperoni. You could also kick it up a notch or two and try the 49er (packed with spinach, artichoke hearts, ricotta cheese, chicken and alfredo sauce) or the family tradition (loaded with pesto sauce, Italian sausage, sun dried tomatoes, mushrooms, and artichoke hearts).

On the healthier side, River Ranch Lodge in Tahoe City has a number of small plates that are light on guilt but certainly not lacking in flavor. Patagonian shrimp ceviche offers refreshing hints of lime and cilantro. The ahi poke’s Hawaiian flair treats you to a texture fest with the creaminess of ahi tuna and avocado and the silkiness of wakame seaweed accented by the spice of ginger and poke sauce. If you’re looking for light but savory, the heirloom caprese is the quintessential summer salad. Juicy heirloom tomatoes and smooth fresh mozzarella adorned with basil, balsamic glaze, and infused olive oil — yum.

Now, if these ideas don’t inspire you to gather your neighbors and friends to share some laughs while 6 feet apart, they should at least be getting your stomach grumbling. It’s important to remember that while many establishments are reopening, physical distancing guidelines are still very much in effect. No hugs but air hugs! At your driveway soirée, make sure to have portions separate for everyone so you’re not “double dipping” even on reaching for the goods. We’re all hungry for time with our loved ones, so if you do decide to gather, be mindful of keeping your distance and continue to show your support for local eateries. Find even more options for takeout online at moonshineink.com.

Main Image Caption: DRIVEWAY SOIRÉE: Hungry for time with loved ones as much as good food, people have taken to holding neighborhood get-togethers in their front yards and driveways so they can enjoy both while maintaining social distancing. Courtesy photos