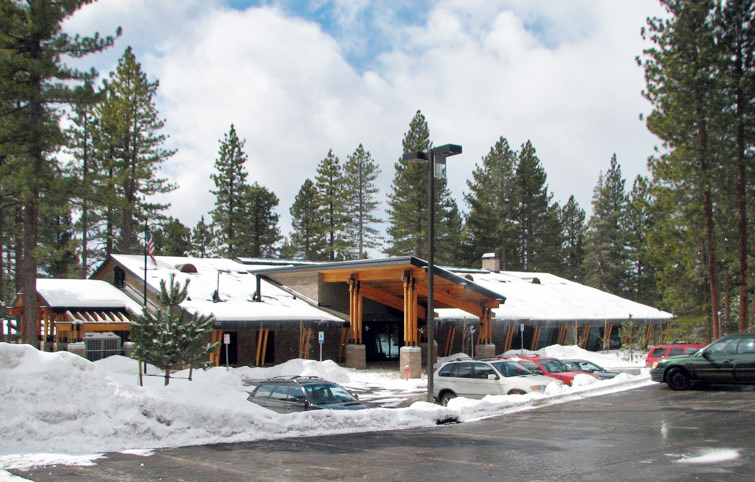 When the Incline Village Library’s new building opened in 2005, the $3.6 million, 11,000-square-foot facility was open six days a week. But tough economic times in Washoe County during the past five years have hit the library with massive budget cuts, forcing it to reduce its number of librarians and limit hours to five days a week.

Kathryn Kelly, founder and executive director of the eLearning Café, an educational nonprofit in Incline Village, thinks she has a solution that would be a win-win for everyone involved: Staff the library with eLearning Café employees, thereby helping the library to stay open longer, maximizing the use of a taxpayer-funded building, and reducing the café’s need for expensive rental space.

Kelly got the idea after the Incline Village/Crystal Bay 2020 Vision process produced a final report last August on plans for the area’s future.

“Out of that report came the notion that we have this gem of a library, why are we only open 25 hours a week?” she said.

Kelly, whose eLearning Café has six staff members and a database of 80 volunteers who teach supplemental courses to middle and high school students as well as senior citizens, proposed a one-year pilot program in which the café would move some of its programs and staff to the library, enabling the library to stay open 70 hours a week with only one librarian. This would allow the eLearning Café to close its larger space in the Raley’s shopping center, saving the café money.

“If we help out the library, we offer a community service to more people in a building that taxpayers are already paying for,” Kelly said.

The modern Incline Library, which boasts a coffee bar, comfortable reading areas in front of a two-sided fireplace, outdoor patios, and community meeting rooms, was funded with a 2-cent property tax override in 1994. A few years after it opened, however, the economy took a nosedive, and Nevada’s property values plummeted. (Nevada posted the highest state foreclosure rate for five years in a row, only recently becoming unseated by Florida.) For a library system that gets its funding through a combination of property tax and consolidated tax (a mixture of sales tax on certain goods and other taxes), the decline in property values spelled disaster. The Washoe County Library System’s budget was cut by 45 percent, and it lost 95 positions through attrition that it could not afford to replace. One small branch in Sparks closed, the county had to sell its bookmobile, and all of the system’s 12 libraries saw 35-percent reductions in hours. Now no branch is open for more than five hours a day. The Incline Village Library went from being open 43 hours, six days a week to 25 hours, five days a week.

“Everybody would like to see us open longer, but we are just not in a position to do that,” said Arnold Maurins, Washoe County Library director. “You take a 45 percent hit, and people want business to continue as it was, but it can’t be done.”

Last month, Kelly started a petition asking the Washoe County Library Board of Trustees to enter into an agreement with the eLearning Café to use its staff to expand the Incline Library’s hours. By the time of the board of trustees meeting on the issue in mid-January, about 250 people had signed the petition. Nevertheless, the board rejected Kelly’s proposal.

“The main question was, did the library board have the authority to enter into an agreement with the café, and the lawyer said, ‘No,’” Maurins said.

Some of the legal issues preventing an agreement include concerns about liability and the fact that volunteers cannot be used to expand hours by taking the place of paid staff. Maurins said Kelly’s proposal, which stated that adding eLearning Café staff to the library would come at no cost to the public, did not take into account the cost of utilities during expanded hours.

“It sounds great, but a lot of things are like that,” Maurins said. “It’s a good starting point.”

Despite the legal roadblocks, Kelly is still hopeful that the eLearning Café can help the library stay open longer. She will take her case next to the Washoe County Board of Commissioners’ joint meeting with the library board of trustees on Feb. 26.

If her proposal is not accepted, Kelly said she will consolidate the café into one space and will have to cut back on some of the senior classes. According to Kelly, the eLearning Café has served about 300 seniors since it opened two years ago, and about one-third of the local school kids.

“A public-private partnership is kind of scary because no one has a lot of experience with it,” she said. “But we are losing the library as an icon of civility that we all grew up with.”

Nevertheless, things are looking up for the Incline library. Starting last month, due in part to a stabilization of the economy, it is now open five hours longer, for a total of 30 hours a week.