Home Sections Arts & Culture Bringing the music back to the people, one jam session at a... 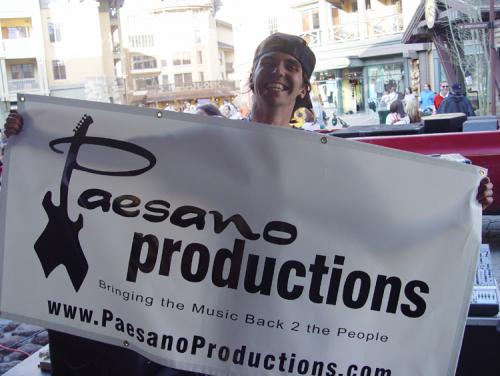 From the time he was 8 years old grooving at a Beach Boys concert, Nick Catanella III has pursued music with unfaltering passion and ambition. From the Beach Boys to Phish to living out a rock star dream as a teen, Catanella has made celebrating music his life-long mission. ‘I am young, ambitious, educated, and know music. At 15, I was playing drums in a rock band, playing in theaters and opening for well-known bands of the time. This is where it all began,’ Catanella said.

When Catanella moved to the Reno-Tahoe area, he felt there was no significant local music scene. ‘The occasional $35 show here and there doesn’t cover it; people should be free to dance every night of the week if they want to,’ Catanella said. The lack of a local music scene inspired Catanella to establish Paesano Productions. Through Paesano Productions, Catanella is able to make life easier for bands by being their full-time advocate. Paesano hits the gamut of outlets – radio, print, and Internet advertising – to expose and promote these artists as they break onto the national music scene. Along with advertising, they also promote artists to venues and even to extreme sport film producers, Catanella said. ‘Exposure and direction is our priority for the artists.’

‘Bringing the music back to the people,’ is the slogan for Paesano Productions – it’s a potent promise. ‘The slogan just came to me right away when Paesano Productions was emerging. It means we are here for you… ‘Paesano’ in Sicilian means ‘country man’ but I say ‘brother man’,’ Catanella said.

lthough representing so many different acts from hip-hop to bluegrass can be challenging, it’s the reason Catanella loves his job. ‘Music touches everyone in one way or another; [but] not all music touches the same people in the same way. It’s undeniable, everyone loves music. Rhythm is life. Even someone without hearing can feel the music, feel the rhythm. It’s everywhere,’ Catanella said. ‘Myself personally, I would have just as much fun at a hip-hop show as a bluegrass show. It all depends on how you approach the show.’

Paesano Productions started out as a promotional gig designed to help local bands land more shows and gain more publicity. After meeting Frame of Mind, all that changed. ‘Frame of Mind inspired me to push myself into new territory…doing things I’ve never done before,’ Catanella said. Moving beyond the promotional sector into managing a band has allowed both Frame of Mind and Paesano to take their music and business to the next level.

Catanella has set up Frame of Mind Management to evaluate and execute business decisions. As manager of Frame of Mind, Catanella focuses on creating an advertising budget, working every angle to gain higher album sales, booking bigger venues, and increasing concert attendance. He also organizes street teams in every city along the tour to record live performances for online release and to help get albums into local stores.

Frame of Mind, originally based out of McCall, Idaho, met Catanella at a show in Tahoe. ‘He introduced himself and we hit it off,’ Scott said. Catanella wanted to be a part of what Frame of Mind was doing with their sound, which according to the band, is ‘a blend of New jam-rock with a multitude of flavors and styles.’

Obie Scott, guitarist and vocalist for Frame of Mind, said Catanella knows what moves to make in order for the band to step up to national recognition. Since Frame of Mind joined up with Catanella and Paesano Productions, they have catapulted in a new direction, Scott said. Frame of Mind has had constant play rotation on Sirius Radio since April 1 with non-stop listener requests for more; and they just released their new full-length album, ‘Catch it Try.’ The band also relocated to Reno in August and have hit the road to tour in Northern California through November.

Their first October dates included a stop at the Boom Boom Room in San Francisco on Oct. 3 and on Oct. 7, Frame of Mind threw down at the after party for the North Mississippi Allstars show at the Crystal Bay Club. On Friday the 13th, Frame of Mind will be playing with Blue Turtle Seduction for the first time. Catanella says he always loves crossing paths with Blue Turtle Seduction, even though during festival time they can be ‘slightly cranky and tired.’ But ‘feeding the Turtles at 6 a.m .with PBRs and Bear Claws always changes their mood,’ Catanella said.

BRs and Bear Claws notwithstanding, Scott says Frame of Mind is stoked to be immersing themselves into the Nor-Cal music scene. As for Catanella, running Paesano Productions and Frame of Mind Management is time consuming but well worth it. Paesano up to now has been primarily west coast based, but with an average of 300 shows booked each year, Catanella believes next year they will transcend to a national level.

‘In the music business, I guess just like in life, tough times come and go. It takes a certain person to handle these tough times and come back ten fold with their next move – for me it can be motivating,’ Catanella said. ‘For a year and a half in existence, I would say Paesano Productions is a success and we are definitely still both growing and gaining momentum.’

Other shows by Paesano bands

Cool as a Cucumber

Bringing the music back to the people, one jam session at a time
Arts & Culture / Event Type
12:00 am

Bringing the music back to the people, one jam session at a time
Food & Drink / Music

Bringing the music back to the people, one jam session at a time
Sports & Outdoors
12:00 am

Bringing the music back to the people, one jam session at a time
Food & Drink / Music