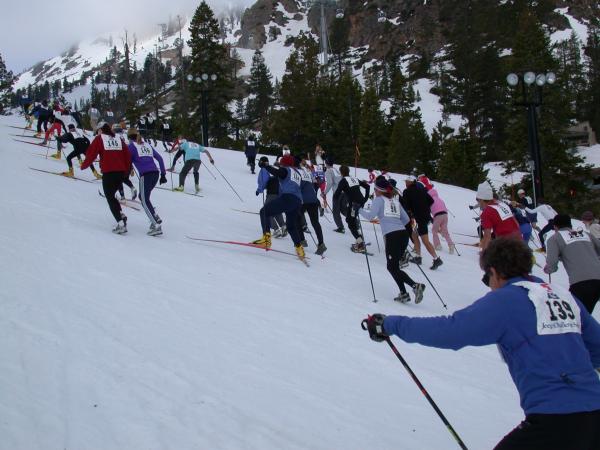 Determination is key, endurance is required, and a sense of healthy competitiveness is recommended in order to celebrate the 20th Annual Billy Dutton Uphill Race at Squaw Valley on April 12.

The race will be held on Easter Sunday where participants will come with cross-country skis, snowshoes, running shoes or the occasional bicycle with one goal in mind: to tackle the 2,000-foot vertical climb and a total of 3.2 miles uphill to a beautiful 8,200-foot where views, weather permitting of course, will allow all to see the serene views of why we decide to call Lake Tahoe home.

Anyone that has lived in Lake Tahoe longer than a season knows the Dutton name. Billy Dutton, a man whose image and legacy is remembered year after year when race enthusiasts start from the bottom of the infamous KT-22 and zigzag all the way to the top of High Camp.

Dutton was known for getting up at 6 a.m. and hiking the ridge on cross-country skis, he had a vast knowledge of the Tahoe Basin and the surrounding backcountry and was often called a backcountry superhero. His get-up-and-go personality mixed with a zest for backcountry was a perfect combination for a lifestyle that embraced adventure.

‘He was the kind of guy who wouldn’t wait around,’ said Betty Dutton, mother of Billy, when explaining her son’s eagerness for exploring. ‘But his love for the area and its people was always present.’

After meeting Betty Dutton one could easily see why Billy Dutton has made a name for himself. The energetic and incredibly young at heart 80-year-old woman couldn’t say enough about her son. It was hard to write down all of the stories that flowed and at one point I simply had to sit back and listen as she began to relive the memories aloud. She spoke of a past when Squaw was merely a baby in the ski industry and where residents were more of a family than neighbors.

‘It was a lot different 20 years ago and it was much more of a family-style community,’ she said. ‘Something so simple as shoveling snow was a family affair and it’s just not that way today.’

Whatever the past presents to us it is clear that Squaw Valley and the Dutton family history are laced together in a lot of ways. All five of the Dutton children spent the majority of their lives roaming the ridges and terrorizing the ski slopes. One cannot neglect the fact that without Squaw and the Tahoe Basin many of the Dutton family memories would not exist. It is easy to see why Billy Dutton wanted to give back to the Squaw Valley community.

Sadly, his time was cut short when he was diagnosed with skin cancer and left all who loved him at the young age of 38. His dreams became therefore the dreams of his family and friends and have continued to thrive for 20 years. In honor of a man who wove such a strong thread through the community, the Dutton family and friends established an event that would continue giving back even after Billy was gone.

‘Billy loved kids and wanted to help anyway that he could and it was unfortunate that his time was cut so short,’ Dutton said.

The race enables people to remember Billy Dutton by doing something that he loved so much on a mountain that is laced with his footprints. It has been 20 years since participants first geared up to take the climb and its popularity only continues to grow.

Christine Horvath, director of Marketing for Squaw Valley attributes the 20-year success to the fact that the event supports a great cause and that the Dutton family name is embedded with the rich history of Squaw Valley.

It must be something because year after year people take part in the uphill battle against all odds, namely weather, which is unpredictable to say the least.

‘We’ve had the race in heavy snow, frozen snow, rain, strong winds, and sunshine,’ says Dutton. ‘The weather never stops people from taking part in an event that remembers Billy, a loved one and a friend who did so much for the community.’