Home Sections Behind the Camouflage 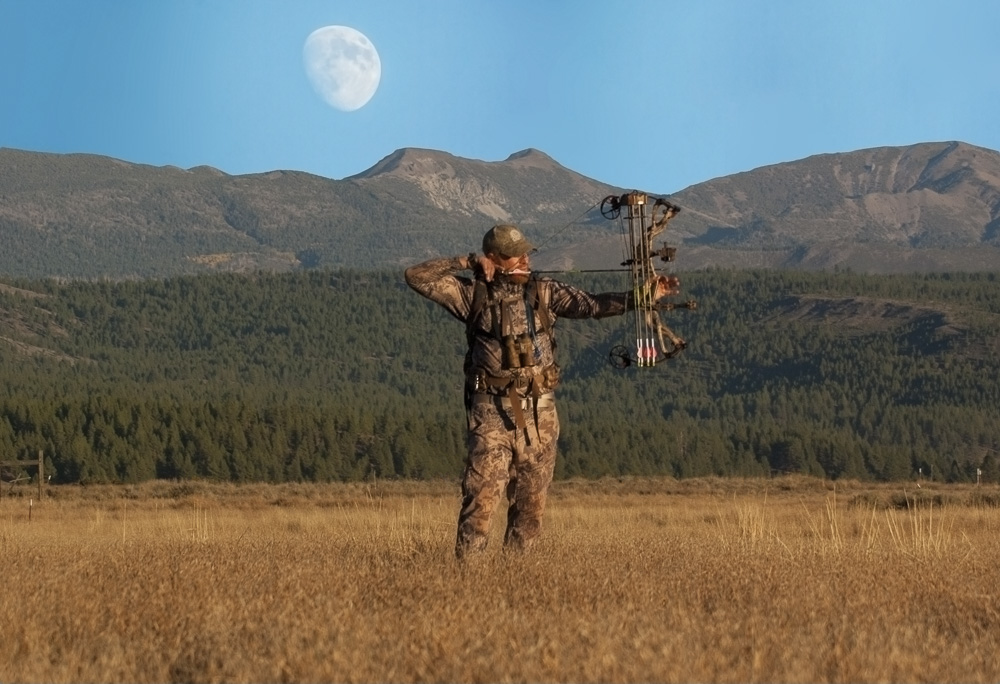 Well before the first glimpse of sunlight approached on a September dawn, Scott Schield set out from his house in Russell Valley, driving for an hour to a Granite Chief Wilderness trailhead. He then hiked for about an hour and a half deep into the forest, getting to where he wanted to be just as the sun rose. Dressed in woodland camo, he explored the wilderness, feeling like a kid on Christmas day. He was out for opening day of deer season.

He hunted all day, hiking out just as the sun set, though he had nothing to show for it. But the time spent traversing far beyond hiking trails and normal human traffic with heightened senses — focused on walking as quietly as possible while straining his ears for any hint of animal presence — was, as always, an experience all in its own for Schield.

Schield learned how to hunt deer from his father while growing up in Pennsylvania. “At no point in my life do I feel more at ease than when I’m hunting … It feels natural,” said Schield, an avid archer who has lived in the Tahoe area for 18 years and butchers and ages all of his own meat. “When I was a kid growing up, we would have enough meat to sustain our family for the entire year.”

It’s far more common in Tahoe to see a car with ski racks on it than gun racks. People move to Tahoe to pursue a bounty of outdoor activities, but hunting is typically not one of them. The amount of game in Tahoe hunting areas is also quite small, and regulations to conserve herd sizes further limit hunters’ potential yield.

Hunting can also be a socially divisive sport. It carries implications far beyond those of a sport like baseball, from conservation issues to ethical debates to safety concerns, and the act of hunting has evolved way beyond its early days.

Even amid the challenges to hunting in the Tahoe region, a sort of underground network of individuals are creating self-sustaining systems where they and their families eat what they kill. While most Tahoe hunters don’t live exclusively on game, carrying on the tradition and working hard on each hunt makes the meat taste that much sweeter.

Before we were farmers, we were hunters and gatherers. People used every possible part of the animal, not only relying on them for food but for shelter, clothing, and tools.

“When I hunt I remember I am part of the habitat, and that my ancestors shared this habitat with other animals years ago,” said Holly Heyser, editor of California Waterfowl Magazine and a resident of Orangevale, Calif.

In addition to curating the magazine, which doubles as an educational and habitat conservation organization, Heyser takes photographs for the books that her partner, avid hunter and forager Hank Shaw, writes, like Hunt, Gather, Cook: Finding the Forgotten Feast, which teaches people how to eat off the grid. Since she started duck hunting eight years ago, Heyser has witnessed the evolution of her own views on hunting.

“When you spend that much time watching an animal, you fall in love with it and appreciate everything about it,” she said. “People have different ways to deal with the animals that they just killed. I often apologize, some people pray … A lot of the time I’ll put myself in the shoes of the animal I’ve just killed.”

Hunting and the associated respect for the animals were crucial parts of Washoe and Paiute traditions for centuries. Both tribes would hold rabbit drives: the younger people would herd the rabbits, running them to an enclosed area where the elders waited and used either guns or netting to catch the animals. Both tribes were also known for making rabbit blankets from the pelts.

“Bigger game, like the antelope, was tougher,” said Ralph Burns, storyteller and historian for the Pyramid Lake Paiute nation. “Starting from up to 20 miles away, they would slowly lure the antelope to an area with rope and sage brush [tied like a corral]. When the antelope were corralled, they would get excited and run around in a circle until they got tired.”

The Paiute used bow and arrow made from juniper trees to kill antelope and deer, though Burns remembers that deer hunting was even harder because the hunter would have to go find the deer, shoot it with an arrow, and then track it for up to two days until it stopped moving. Though there were varying methods of hunting for different animals, the respect and understanding of what it meant to take a life were constants across the board.

“Usually in the mornings, the first creek we would come across we would wash our face and clean up a bit, and the older gents would recite a little prayer for good luck, offering our thanks and stuff like that,” said William Smokey, chairman of the Hunting and Fishing Commission for the Washoe Tribe of Nevada and California. “Upon the kill and field dressing, you thank the deer for giving you its life and say, ‘I’ll see you again.”’

A lot has changed in the world since this area’s prime hunting days in the mid-19th century, including the environment’s ability to support diverse, plentiful game, methods of hunting, and society’s feelings toward it. The darkest side of hunting — trophy hunting — has created an even worse reputation for the sport by celebrating waste and the thrill of the hunt just for that, with no regard to its original intent.

“It was really hard for me to understand how people hunted; I had a really negative impression of hunting and hunters [before I did it],” Heyser said. “I feel much more of a connection to the animals through this relationship with hunting. You feel sad that you killed something that was really beautiful and you don’t do that without thought. But it’s easier than you think. Honestly, if you eat meat and you’re interested in it, you might as well give it a try.”

While hunting and taking an animal’s life can be difficult to comprehend and accept, it is a normal part of the food chain, one that has always existed. Today, the only difference is that it is more common and more accepted for animals to be killed out of sight from the consumer.

Pastor Joel Martyn, who recently moved from his home in South Lake Tahoe of 11 years to Washington, has hunted for 20 years. He focuses on bigger game that will feed his family of four longer — one elk can feed his family for more than two years, and one deer can last for a year. For Martyn, hunting is just one aspect of his life, but a significant one directly tied to survival.

“I have come to realize that providing wild game for my family is very fulfilling because I know where the meat came from. I harvested, butchered, and prepared the meat, meat that was from an animal that was happy and free ranging,” Martyn said. “It’s funny, the times that I do go to the market to buy some steaks, my kids won’t eat the meat because they say it tastes funny.”

Whether for concerns over how livestock is treated, preferring the taste of venison to beef, or upholding  tradition, hunting is part of the Tahoe sub-culture and, for some, a way of life. The act of hunting can be just as much about bringing home food as it is about carrying on the lessons and techniques that go with it.

Tahoe City resident Matt Brown remembers from the time he was 5 years old, walking three steps behind his dad in the woods of Northern California and learning how to move silently through the forest. Brown’s relationship with hunting has fluctuated over the years, but has strengthened recently as he learns more about how inhumanely livestock is treated.

The last weekend in September, Brown took his 9-year-old son, River, on a 15-mile mountain bike ride in Downieville. The two ended up going for a little hunt after and walking out of the woods with a buck. Instead of returning to Tahoe, they drove to Brown’s parents’ home in Grass Valley where three generations — Brown, his father, and River — skinned and butchered the deer together.

“I remember my first time when I was 5 because it is a big deal … This was the first deer I had ever gotten without my dad, so I kept looking over my shoulder for him to be there, but now I was the dad,” Brown said. “After we got the buck, we talked about absolute respect for the animal, and River did really well. For the rest of his life, regardless of how many times he hunts, that one day is forever.”

Behind the Camouflage
Business
6:00 pm

Behind the Camouflage
Music

Behind the Camouflage
12:00 am

Behind the Camouflage
Sports & Outdoors / Wellness