Home Sections Opinion Before Snowplows and Snowblowers There Were Horses Hooves 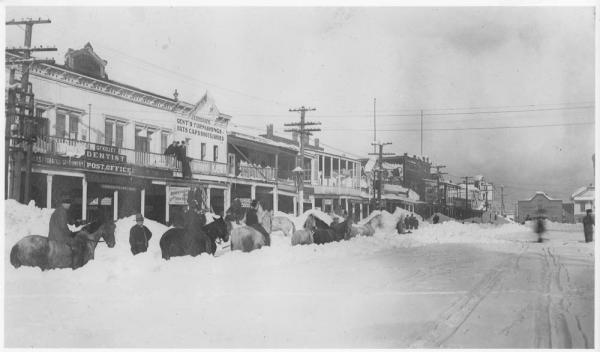 Today we complain about berms and the town plow being late to scrape snow from our street. But early residents of Truckee and North Tahoe didn’t have snow removal. Instead, they had a team of horses that ambled up and down streets packing down the snow with their hooves. In this photo from the Truckee Donner Historical Society, the equestrian equivalent of today’s Caltrans workers are seen packing the snow on Front Street (now called Donner Pass Road along Commercial Row). During this time the road dead-ended at the livery stable. To read more about how snow removal has evolved over the decades since this photo was taken — including the stories of storm-hardened Union Pacific rail workers and the fleet of town snowplows that remove millions of cubic yards of snow each large snowstorm — turn to p. 17. The Truckee Donner Historical Society’s Joseph Research Library is open every Thursday from 10 a.m. to 2 p.m. and is located in Meadow Park, 10115 Donner Trail Road.
~ David Bunker

Before Snowplows and Snowblowers There Were Horses Hooves
Wellness

Before Snowplows and Snowblowers There Were Horses Hooves

Before Snowplows and Snowblowers There Were Horses Hooves
Arts & Culture
3:30 pm / 5:00 pm

Before Snowplows and Snowblowers There Were Horses Hooves
Community