Home Sections News A Trim Ship Without a Captain 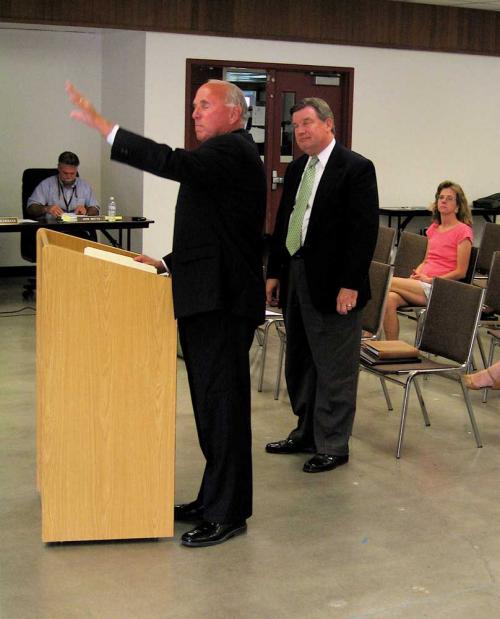 Reports from the 80 Fire in Tahoe Donner punctuated the Tahoe Truckee Unified School District (TTUSD) Board meeting on August 22. Between each agenda item board secretary Milan Slikkerveer offered updates on the progress of the flames. When this reporter staggered wearily from the meeting at 11 p.m., firemen were stationed in the former Sierra Mountain Middle School gym, readying it for use as a refuge for evacuees.

The Search is Underway…
After a month-long selection process, the School Board has found consultants to help them find a new superintendent. At the September 5 meeting, the Board hired a Los Angeles firm named the Cosca Group.

Few members of the public attended the Board meetings on August 9 and 22, and September 5, but those who did expressed frustration over how little of the selection process was accessible to the public. Dawn Evans, president of the Glenshire Elementary Parent Teacher Association complained that the August 22 Board packet did not include a list of the Consulting firms under consideration, the Board’s questions to each firm, nor the written answers each firm provided to the Board.

‘I’m not happy for the fact that we still don’t have access to the same information as school board members have access to, and I mean public information,’ Evans said. ‘In five to eight years (the Superintendent) will be making huge impacts on my younger kids when they get to high school.’

The exact procedure the Cosca Group will use to select a new Superintendent hasn’t been identified yet, but Board President Kristy Olk predicted that the public will only be involved in the initial work to identify the strengths the community would like to see in a new superintendent. The Board will hold those strengths in mind, but the actual selection process will be conducted in secret to protect candidates who do not want their current employers to know they are looking for a new job.

‘You can get better candidates if (the candidates) know it’s a very confidential process,’ Olk said.
According to California law, the final hiring decision will rest solely in the hands of the Board. Olk stated that it could be seven months before TTUSD lays claim to a new chief administrator. Assistant superintendent Jo Wilson has acted as interim superintendent since Dennis Williams resigned the post on July 9.

A New Budget Through a New Method
In June, the Board launched an effort to change the way money is handled in TTUSD.

In the spring, before the budgeting effort began, Board member Bev Ducey anticipated a level of collaboration that hasn’t traditionally occurred. ‘(Principals) have acted like the captains of their own ships for so long, and now they’re going to realize that they’re an armada.’ With the new budgeting process the Board sought to build a comprehensive picture of the district’s finances by collecting the input of school principals, district administrators, union representatives, and the public.

In late August, Assistant Superintendent Jo Wilson said the effort had been largely successful. The Board hired Janelle Kubinec and Lewis Wiley, consultants from School Services of California, to assist with the budgeting process.
‘This is the biggest effort to involve the whole district I’ve seen since I’ve been in the district,’ Wilson said.
This year, the Board didn’t start the budgeting process early enough to shape a complete picture of the District finances; but they’ll get a jump on next year’s budget by starting in again in November.

The unexpected funds haven’t been allocated yet, but Board member Bev Ducey said a portion will go to the district’s basic aid reserve. The reserve is a pool of funds designed to buffer the district against future fluctuations in property tax revenue. TTUSD’s reserve is currently about three percent of the total budget. Most basic aid districts maintain reserves twice as large.

Ninety percent of California school districts shape their general-purpose budgets from a mixture of property tax revenue and state funds. The ten percent of school districts able to build their budgets entirely out of property tax revenue are termed ‘Basic Aid’ districts. Unlike the majority of school districts whose state funding is tied to the number of students enrolled, basic aid districts don’t lose funds as student enrollment declines. Basic aid districts generally have more money to spend on each of their students, but their budgets are also tied to the vagaries of the economy. TTUSD enrollment has been declining since the fall of 2001.

A Trim Ship Without a Captain