Home Sections Mountain Life A Murder and an Unkindness 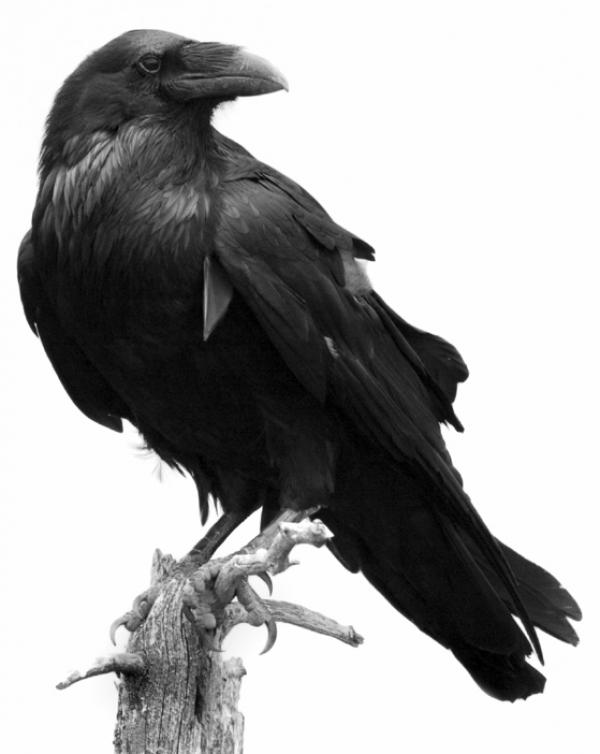 Then, upon the velvet sinking, I betook myself to linkingâ€¨

Fancy unto fancy, thinking what this ominous bird of yore —

What this grim, ungainly, ghastly, gaunt, and ominous bird of yoreâ€¨

~ Excerpt from ‘The Raven’ by Edgar Allan Poe

Winter be damned, ravens might say, or perhaps it’s ‘Nevermore’ to warm, sunny days. The noisy black birds remain at Tahoe all winter, as do crows. Ravens, crows, and jays, all resident Tahoe birds, belong to the Corvidae family, also known as corvids. As a group, they are known to be playful, raucous, and aggressive, but also damn smart. Why bother working for your food when you can linger at a dumpster or score roadkill? Corvids also mob predators with belligerent chatter and hostile action. This might explain the name for a flock of crows, a murder, and a flock of ravens, an unkindness. No wonder Alfred Hitchcock used crows in the horror movie ‘The Birds’!

The raven and crow are often misunderstood to be the same bird. However, the common raven, Corvus corax, and American crow, Corvus brachyrhynchos, are quite different. Foremost, the raven, which ranges from 21 to 27 inches tall with a wingspan of around four feet (with pronounced gaps in the wingtips), is much larger than the crow, which measures 16 to 20 inches with a three-foot wingspan. The raven also has some distinguishing characteristics — a ‘goiter’ or shaggy throat feathers, a pronounced thick-billed Romanesque nose, and rather than the crow’s ‘caw caw’ its calls vary as guttural croaks, gurgling noises, and a ‘tok.’ Another way to tell the two birds apart is by the raven’s V-shaped tail as opposed to the crow’s square-like tail, both easier to distinguish in flight. When in the sky, the raven quietly soars while the crow ‘flaps and yaps.’ Have you ever seen a group of black birds way up in the sky, circling like slowly moving objects on a baby’s crib mobile? That flock, or unkindness, would be ravens.

A Murder and an Unkindness
Food & Drink / Music

A Murder and an Unkindness
Food & Drink / Music