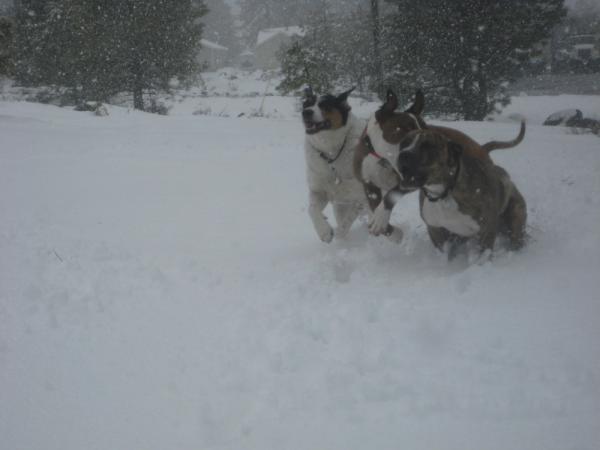 Us dogs have it pretty good here in Tahoe and Truckee. We have tons of friends to play with, beautiful open spaces to roam, and a lot of great people who care about us. This month I met a friend who reminded me that we all don’t have it so good.

Percy is a 10-month-old pit bull mix. He came to the Humane Society of Truckee-Tahoe after his owner was forced to relinquish him. It’s a sad story, but we are working on a happy ending.

It started when Percy’s owner had an argument with his girlfriend. Soon after the argument, Percy didn’t come when he was called. When Percy did return, he was kicked and hit. Percy snapped at his owner after the abuse and this further angered the man. The owner then proceeded to drag him down the street by his collar, nearly strangling him. Some good Samaritan driving by saw this and called the police. Twice during this incident, Percy went limp and was foaming at the mouth. Deputies who arrived at the scene noticed Percy was shaking and unstable on his feet. He was taken to an emergency veterinary clinic and treated for internal bleeding and other wounds. His ‘owner’ was arrested and charged with animal cruelty.

A month after this horrible incident Percy was taken in by HSTT. He is now in what we call the ‘pit bull protection program,’ living in a foster home with two dogs, two cats, and a couple of teenagers. One of Percy’s roommates, Roxy, is also up for adoption.

They get along really well and bounce around the trails together like a couple of rambunctious kids. Percy’s foster mom, Janice, takes great care of him and is teaching him new tricks every day.

I was lucky enough to meet Percy and go for a walk with him, Roxy, and Janice along the Truckee River. Percy shows no ill effects from his ordeal and was well behaved on our walk. My grumpiness around puppies is well documented, but I found 10-month-old Percy and 1-year-old Roxy to be a delight. Even with my reconstructed knees, these young pups inspired me to run and play like a kid. Percy is a sweetheart and is embracing his second chance at life. He can be a little timid around people, but I don’t blame him. Really, he acts just like a normal healthy dog. After our walk, he and Roxy gave my person some pretty serious kisses on the face and lips. If I didn’t know any better I would have been jealous. Get a room!

There is a lot going on at the shelter as always. I saw a bloodhound named Bo, ‘Flip’s Friends’ alumni Jasmine and Beauty, and a chocolate Lab mix named Sam. My housemate Tobias the cat wants me to mention that there are great looking cats as well.

For more information on Percy, Roxy, or any of the other great friends at the shelter, visit hstt.org. Have a great month.

A Better Place for Percy
Sports & Outdoors
12:00 am

A Better Place for Percy