Home Columns Out & About Time-Honored Tradition

With sparkling lights and festive music, folks of all ages were welcomed to old-town Truckee Nov. 22 in a scene played out in holiday movies time and again: the annual tree lighting. Held the Friday before Thanksgiving, it’s an evening filled with tree decorating, hot cocoa, carols, and of course, a special appearance by the big man himself — Santa.

In the days leading up to the ceremony, students from Truckee’s elementary, charter, and preschools enthusiastically create ornaments that will adorn miniature trees lining Commercial Row. The ornaments are often eco-friendly and sometimes serve a dual purpose for birds to snack upon. After the decorations are all hung on the trees with care, the scores of students and their parents make their way over to the train depot, where the Bud Fish memorial tree stands proudly, just waiting for the switch to be flipped when it will come alive with color.

For over four decades, Truckee residents have celebrated the spirit of the season with the tree lighting. The event itself was born from two different celebrations that merged into one. According to Cassie Hebel, executive director of the Truckee Downtown Merchants Association (TDMA), the Truckee Rotary long used the tree lighting as a way to honor former resident Bud Fish, “a very giving man who donated time and resources to supporting Truckee,” while the merchants association would sponsor the small tree trimming event. Sometime around the early 2000s, they joined forces and became one.

The result of that merger is the annual Downtown Holiday Festival & Bud Fish Tree Lighting, with different entities still combining to make it possible. While the TDMA oversees the small tree trimming — this year there were 37 trees with roughly two classes decorating each — the Town of Truckee provides the big tree (the actual Bud Fish is a smaller live tree at the depot) and the Truckee Rotary sponsors hot chocolate for all, as well as the arrival of Santa and his elves, all while continuing to honor the memory of the man named Bud Fish. 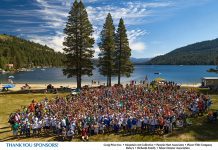 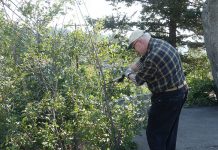 Friends of the Veterans Building