Home Columns My Shot What the Murder of George Floyd Means to Me as a... 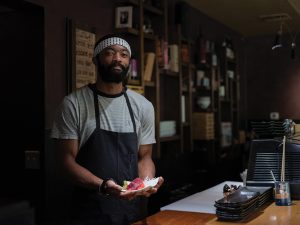 I have lived in the area for the past 10 years. We all know that most people consider our community to be in a bubble, isolated from real world issues such as social injustice, murder, and high crime rates. Now that the news of George Floyd’s murder has reached a local level, I would like to share my opinion as an African American living in this rural area.

I was born and raised in and around the Bay Area, surrounded by many different cultures, ideas and political backgrounds. There was never the term POC.

Now, I live in Truckee where less than 2% of the population is African American. Every day, I have to consider my reactions and responses to the things I encounter. People are amused with my curly hair, are surprised when I speak “skier” lingo, and often people ask, “Do you only date white women?” While fairly progressive, Truckee is still a town that is very homogeneous, which makes it difficult to understand and communicate with those who are racially and ethnically different, forcing assumptions on what it’s like to be “black.”

Systemic racism has plagued our country for decades. Unfortunately, due to the murder of George Floyd, this worldwide issue has now been brought to the forefront of all of our lives. I don’t know how to react, I feel uncomfortable. As a minority I feel misrepresented. Can I trust our nation’s leaders to truly protect and serve me, when history shows that they have failed over the years? Although laws have been signed into action and legislation has been approved, the facts are still there; unemployment rates, wealth disparity, education, and criminal justice all show disproportionate numbers toward African American people. How do we fix this?

I am happy that our community is aware of social injustice. It is truly inspiring that so many people in Truckee/Tahoe were committed to the protest on #blackouttuesday but I am concerned: Will this movement continue once the media covers these protests less and less as time goes on? The representation of black culture has not been a relevant issue since I have lived here. I believe the time is now to start these conversations of being inclusive.

It’s clear that this country has reached its boiling point. Enough is enough. People deserve fairness and we deserve equal opportunities. The time is now, to look at the real picture; just because an individual has an ethnic background does that individual really deserve to be treated with prejudice?

~ After attending college at California State University, Chico, Robert Watts moved to Truckee in the summer of 2010. As the head chef at Drunken Monkey Sushi, Robert has established a notable reputation around town and enjoys mountain biking, snowboarding, and spending time with friends at local breweries.

What the Murder of George Floyd Means to Me as a Truckee Resident
Wellness
3:00 pm / 5:30 pm

What the Murder of George Floyd Means to Me as a Truckee Resident
Arts & Culture
4:00 pm