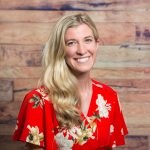 As I write this, my 4-month-old baby girl lies on the couch next to me, snuggled between the back couch cushions and my extended legs, which run parallel to the front of the couch. Between my knees I’ve propped a pillow to block her view of the powered-on TV and angled my computer screen away from her eyes.

I’m brand new to motherhood and am terrified of raising my child in the digital age of screens.

Before I proceed, I should clarify that pillow blockade aside, I’m not diving in front of a screen every time there’s one in my child’s periphery. It’s 2021, for crying out loud, and the future of our world is one of screen-dom; I don’t want my kid to be a freak.

Yet I’m fearful that she’ll grow up fixated on phones and iPads and TVs and virtual reality and whatever comes next, to the detriment of experiencing life outside the screen. Digital obsessions are strategically curated by companies to the point of creating an addiction. I think it goes without saying that fostering an addiction is a bad idea.

Concerns like mine are far-reaching. According to a Pew Research Center study from mid-2020, two-thirds of parents in the United States believe parenting is harder than it was 20 years ago, and tech is a major reason why — the poll mentioned the impact of digital technology, the rise of social media, and the exposure of information that comes with such access. What’s more, 71% of those with children under 12 said they have at least some concerns that their kid(s) already spends too much time in front of a screen. (The survey, it’s worth noting, was performed prior to Covid-19’s U.S. outbreak.)

I can’t help but worry when the smarty-pants at Harvard University say things like, “… platforms like Facebook, Snapchat, and Instagram leverage the very same neural circuitry used by slot machines and cocaine to keep us using their products as much as possible.”

Even Steve Jobs, the brilliant mind behind Apple, preferred a low-tech household, once telling The New York Times that he didn’t allow his own children to use the just-released iPad. That’s gotta tell you something.

Fallout of screen-happy children is revealing itself locally. The return of students to full-time school after a year-plus of attending classes through a computer is yielding complex challenges, including social media-induced mayhem and re-learning how to interact with others in person.

As a child of the ’90s, I walked the path of using our family computer only to type up school papers (middle school) to curating my top eight friends on MySpace (high school). Maybe a few games here and there. I don’t remember anything about computers during elementary school, and the flip phones I had beginning in eighth grade were only used for phone calls. My parents didn’t even pay for texting until my junior year — phones and computers and the like just weren’t really a thing.

Only the tiniest part of my childhood revolved around the leisurely use of screens. I hope that’s the case for my child.

For now, I’m following the suggestion of the American Academy of Pediatrics: No screen time for children under the age of 18 months (aside from video chats with family, which qualifies, the academy says, as quality time).

Perhaps this will prevent a digital obsession from taking root and when I can no longer block her view with a pillow, my daughter will have self-control when it comes to this social malady. After all, the looking glass of the digital world is not real life.

Through the Looking Glass: A Parent’s Fear