Home Columns My Shot Shots Fired on the River 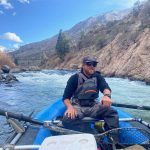 We all have our favorite places outdoors where we go to escape the everyday grind.

Whether it is a favorite fishing hole, mountain biking trail, or craggy peak deep in the wilderness, everyone has their “spot.” Up until spring of 2021, the Hirschdale section of the Truckee River was one of those places for me. A recent change of land ownership in the area has complicated public access to the river, leading me to an interaction with a hothead and a loaded shotgun. Here’s my story:

A couple months back, I went down to the river with my dog, waders, fly rods, and a mini bike (a small motorcycle with a golf cart engine), planning to park at the Hirschdale bridge and ride down the road to the public river access point where we used to fish all the time. Just as I reached one of the new gates that has been put up on Nevada County land, I heard the piercing blast of a gunshot directly behind me. I slammed on the breaks and turned around to see a man in the driver’s seat of a truck with a shotgun pointed out the window.

I sat there for a second, dumbfounded. Did this guy really just fire a warning shot at me? He got out of his truck, screaming, spitting … and still holding his shotgun. I cautiously proceeded toward the man and asked if there was a problem. He yelled about how this was now private land and I was not welcome to fish there. I pleaded my case, citing legal easement or right-of-way that was established there long before this guy purchased the land. I assured him I was only passing through to access California Department of Fish and Wildlife land to fish the river. He didn’t want to hear it and called the sheriff.

When the sheriff arrived, he admitted that the land ownership and public easement down there had gotten very convoluted and hesitantly issued me a trespassing citation at the landowner’s request.

In the meantime, five or six mountain bikers passed us without any harassment by the landowner or sheriff.

There were obviously deeper rooted issues to address here, but I’m not one to argue with law enforcement, and I went home. Fortunately, it didn’t take long for the district attorney to drop my trespassing charge. However, the larger issue still remains. The California DFW’s Truckee River Wildlife Area is public land, yet access to it has been illegally closed to the public by this new landowner. Yes, one passes through his property while heading toward the DFW land on the river, but a California law states that any road used to access public land for at least five years must remain open. Regardless of ownership changes.

Back in September, there was a community meeting held in Hirschdale about this issue, where many fly fishing guides, rafters, and other members of the community showed up to discuss and suggest possible solutions. The landowner’s reasoning for closing the road is that he believes people have been trashing and disrespecting this part of the river. Ideas brought up included weekly community trash cleanups and increased law enforcement in the area to prevent illegal camping.

Unfortunately, nothing has changed. This used to be a destination where families with kids would enjoy a day on the river with its amazing scenery and wildlife. This used to be the only takeout location in the area for family-friendly class 2 floats. Now that access has been illegally blocked, the next takeout is in Floriston which requires rafting several larger and more dangerous rebar riddled rapids.

The bottom line is that these road closures need to be removed. For almost a year now, this landowner has posted illegal road blocks, some of which remain on Tahoe National Forest land. So far, the community has made it clear that we are willing to work with the landowner, yet he has made it just as clear that he is unwilling to work with us. If you would like to help, contact the Nevada County District 5 supervisor, Hardy Bullock (hardy.bullock@co.nevada.ca.us), and let him know how you feel about access to our public land being taken away from us.

~ Keegan Kliman lives in Truckee, working as a ski patroller in the winter and managing a lodge in Alaska in the summer with his wife, Sasha. When he is not working in the mountains, you can find him playing in the outdoors with his splitboard or fly rod.

Shots Fired on the River
Sports & Outdoors / Wellness
9:00 am

Shots Fired on the River
Sports & Outdoors / Wellness
9:00 am