Home Columns My Shot Passing for White in Tahoe 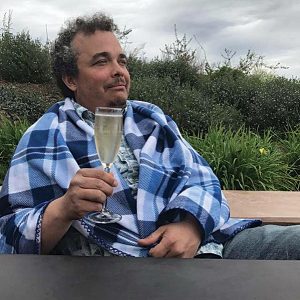 The Black side of my family taught me how to ski. My father taught me how to tuck my uphill knee behind my downhill knee. My dad was obsessed with mountains, with hiking, skiing, backpacking. He died before we started heading out on bikes, but he would have loved that too. I am living his dream here in Tahoe: the dream of a Black man from Arlington, Virginia.

I’m Black, but very few people can tell. I was born ten years after the Supreme Court ruled on Loving v. Virginia. My parents’ marriage would have been considered illegal just 10 years earlier. My mother is White. I inherited her blue eyes. Otherwise, I look exactly like my father. Black people can usually tell that I am mixed before most White people. This is because a lot of Black families have someone who looks just like me, someone who can pass for White.

My grandmother was someone who could pass for White, but that’s not what she did. She didn’t move somewhere far away from home where people would not know she was Black. She didn’t write off her entire family. She didn’t walk around in fear that she would get caught, that they would somehow find out. She would beg the police to leave my grandfather alone, when they wanted to know what a Black man is doing with a White lady. There were places that she could not go and things that she could not do. She was safe so long as she respected those rules and behaved a certain way. The threat of violence at the hands of the government always lingered in the humid Virginia air. My grandparents were not free.

I don’t want to pass for White, but I moved far away from home, away from Blackness, Black people, and Black culture. I married a White woman. We blend right in. I tell every new person who I meet that I am Black, but this is also because I am afraid of what White people could say when they think that they are only among other White people. In Tahoe, it’s pretty safe to assume that most everyone around you is White. With that comes freedom. The rest of the country does not experience freedom at the level that we do. There is a little bit of that old Wild West left over in some of our canyons and meadows.

I worry that we take it for granted. I hope that we see that a lot of our freedom comes from the fact that this is a White space void of Black faces. We don’t feel threatened by each other. That is not the case everywhere.

Freedom in Tahoe manifests in many different ways. We are free to go where we want; the wilderness belongs to us. We are free to risk our own lives pursuing a feeling that we love. We feel free. Some of us will continue the dance party on the side of the road after the sun rises wearing nothing but a thong and some butterfly wings.

I am jealous of that level of freedom, because I cannot let myself access it. I am afraid that I will come across a white supremacist deep in the forest somewhere who recognizes my Afro. Wearing cornrows invites extra attention from the police. The type of attention that doesn’t make them feel safe, so I avoid it. I’m afraid that someone is going to tell me how to behave. That I am being too loud. That I should pull my pants up. That they are calling the police. I’ve been trained like my grandmother to respect some unwritten rules. I feel that my safety depends upon it.

I am grateful for our community. The way we welcomed the National Brotherhood of Skiers. The way everyone showed up for a Black Lives Matter protest in Truckee. Those things mean a lot to me. Thank you. When you see Black people on TV protesting across our nation, remember they just want what you have. In America, no one should have to fight for their freedom. It is our cornerstone value. We have it. Don’t take it for granted. Don’t take it from anyone else.

~ Alex Banks is a software engineer and author who moved to Tahoe for the winter in 2011. Instead of leaving after the winter, he and his wife decided to make Tahoe their home. In 2012 they founded Moon Highway, a company that builds training materials for software engineers.