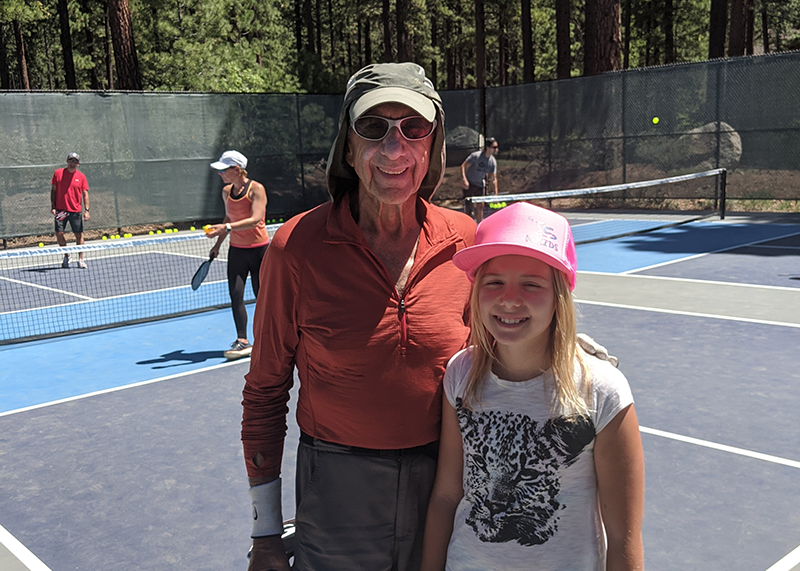 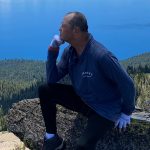 Just before 9 a.m. in late May on a clear, crisp Lake Tahoe morning, a tall, slender 85-year-old man dressed in full leggings, a long-sleeve shirt, and a French foreign legion-style sun protection hat, with zinc oxide glistening from his prominent proboscis; Jim strides confidently onto the pickleball courts. He greets a few people already warming up and begins what will be three hours or so of exercise, laughter, and fun.

Shortly thereafter, his other (some say better) half, Diane, enters the courts for her several hours of pickleball. They do this daily, on practically the same schedule every day. Temperature be damned.

They take on all comers, no matter the age or skill level.

The last game I saw Jim playing, he was partnered with the 10-year-old daughter of golf legend, Annika Sorenstam. They were battling some other players as her mom played on the next court. Laughter, encouragement, and hustle was displayed by the teammates despite 75 years in age difference.

Recently, both Jim and Diane were hospitalized with COVID-19. Now, they are back in action and attribute their health to a lifetime of exercise including their newest favorite sport, pickleball.

Pickleball? What the heck is pickleball?

According to the USA Pickleball Association, it is a fast-growing, family-friendly, fun sport played on tennis court-like surfaces and is a combination of badminton, tennis, and ping-pong. In fact, four pickleball courts fit on one tennis court. They say that the sport has grown by more than 650% in the past five years and is among the fastest growing sports in the country. USAPA has a unique way of encouraging new participants. The organization has 1,900-plus ambassadors across the U.S. and, locally, Incline Village resident and pickleball ambassador Paul Steinberg can be found on the courts most mornings encouraging new players, giving pointers, and helping lead activities.

Regarding Jim and Diane, Paul says, “They set the tone here. They are competitive, friendly, and helpful to players of all ages and abilities. They inspire me to stay active and are a great testimonial of living life to the fullest.”

Here at the Incline Village Tennis Center, most people purchase a membership ($110 per year) and play doubles. Nobody reserves courts. They just show up, warm up, and find people of the same ability and play. The casual social nature of the sport is conducive for drop-in play for people of all ages and abilities.

This is opposed to tennis, a sport in which it is customary for people to make reservations to play with the same people for an hour. In one hour of pickleball, you can play four to five games to 11 points and frequently play with new partners by simply asking to a partner play with you and challenging two other players.

So, whether you are 10 or 85, a daughter of a golf champion or a retired COVID-19 survivor, if you want to stay healthy and have fun, check out this fast-growing sport. But watch out for Jim and Diane; they may be friendly, but they will beat you just like they beat COVID-19!

~ Dan Beeman is a writer, entrepreneur, and pickleball fanatic. He embraces travel, adventure, and fun. He is single. You can learn more about him at danbman.com.

Jim and Diane Fisher  moved to Incline in 1976 with their children. Jim was starting a business in Reno and Diane was getting her real estate broker’s license. “We were starting over,” she says.