Home Columns My Shot Hey, Lake Tahoe! How Do You Like Our Carbon Now?

Editor’s note, Aug. 3, at 10:45 a.m.: Rather than county staff, the Nevada County Board of Supervisors is negligible for the county not providing public amenities. The change has been made below. 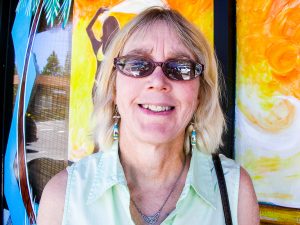 It’s 3 p.m. on a Saturday and after walking about seven miles into Grass Valley via Dog Bar Road, I am relieved. I made it in alive. For as long as I have lived here, citizen residents have asked (begged?) for one measly little stretch of bike path along this busy road so we can safely ride or walk into town. There are no uniform shoulders, the drop-offs along the roads can be as much as half a foot, and in some spots, you can literally stretch your hand out and touch a passing car. You can’t take your eyes off the road for a second.

And how many miles of bike path does “the other side” of our county have? The side near that big pretty lake? In adding up the numbers from biketahoe.org, it’s over 50 miles. We would just love seven — along Dog Bar Road.

Like all gold mining counties in California, this county’s history is about exploitation: first for gold, then logging, and now the current phase — real estate.

For adjoining Placer County, there has been a kind of reckoning. In 2000, Placer County created the Placer Legacy Agricultural and Open Space Conservation Program and just last year, codified this commitment by passing an ordinance to create a county open space department.

There has been no such reckoning for Nevada County, no county-level open space program of any kind. The county seems stuck in its exploitation era, as evidenced by the proposed reopening of the Idaho-Maryland Mine. It is my feeling that communities go through levels of maturity over time and Nevada County is still in its adolescent phase.

Parks, preserves, greenbelts, and bike paths are referred to as public amenities, those integrated within a residential area having the highest value. They are an excellent use of public tax revenue because residents benefit directly, meaning they see tangible benefits from their taxes, and the benefits are multiple.

But Nevada County is doubling down, proudly eschewing these values while aggressively inviting and approving over-sized developments. Even as I type, hammers are pounding on these new developments, conveniently supporting the response that we can’t preserve open space in western Nevada County because “it’s too late.” It’s not about new parks here. It’s about new parking lots in which our kids play (example: the Safeway parking lot in Grass Valley; Safeway has tried in the past to chase the kids out, but where do they have to go? There is no recreation center for our kids in western Nevada County).

That the board of supervisors has completely neglected to provide residents of western Nevada County any public amenities is intentional and goes back decades, the rationale being, they can’t protect open space “because we don’t have an open space program.” This is like someone standing by a fire with a hose and saying I can’t put the fire out because we don’t have a fire department.

The state has established required elements of county general plans for all jurisdictions. These elements are: land use, circulation, housing, conservation, open space, noise, and safety. Additionally, the law states these elements must be applied equitably. In this context, bike paths are seen not just as recreational assets but also as providing alternative transportation corridors to reduce traffic, pollution, and carbon impacts. Regarding integrated conservation, open space, and alternative transportation corridors (bike paths), the county has always been and is in violation of state county planning standards in western Nevada County.

As so many of us have learned over the many years, this was the plan: to deprive western Nevada County residents of new public amenities. In reviewing information emailed to me from the Nevada County Planning Department for the purposes of this opinion piece, there have been no large land acquisitions for parks in western Nevada County since 1984 (land lease for Western Gateway Park in Penn Valley that we all use). Monies spent on the small existing parks have been spent on little projects: short trail segments, new playground equipment, general maintenance. Most of the major funding has gone to (surprise, surprise) the Tahoe side.

As so many jurisdictions across California have demonstrated, what benefits the community on every level and never goes out of business is parks and open space.

You see it every weekend here: lines of cars driving out of town to Tahoe or Folsom, mountain bikes loaded on the back. This is why Lake Tahoe residents should support the idea that every community in California deserves public amenities, which lowers the use pressure on adjacent areas. Supporting more public amenities for western Nevada County means less traffic, pollution, and carbon at Lake Tahoe, equaling a healthier lake. Meaning, we need your help here on the “other side” of Nevada County, Lake Tahoe.

Want to protect your environment? Support conservation and open space for all communities in California and you protect your own.

~ Virginia Moran is a longtime biologist, writer, and community advocate living in western Nevada County. She shamefully admits to dumping a lot of carbon into the air to use Lake Tahoe’s bike path system. She swears she would move to Tahoe if she could afford it. You can learn more about her at ecooutreachvsm.com.

Hey, Lake Tahoe! How Do You Like Our Carbon Now?
Business
6:00 pm

Hey, Lake Tahoe! How Do You Like Our Carbon Now?
Sports & Outdoors / Wellness