Guy passed away in Reno of Covid-related illness. He was preceded in death by his wife of 63 years, Norma (Fewell) in 2012, and is survived by his daughter Shelley; son Scott and his wife Joy Koch; daughter-in-law Charney Risner; granddaughter Delaney Risner-Wilson and her son Kai; grandson Dusty King, his wife Jaime, and their children Frankie and Rocco; and granddaughter Haylee Fox, her husband Tom, and daughter Remington. 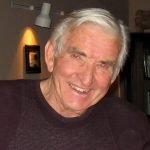 Guy was born in Mishawaka, Indiana, on Dec. 19, 1926 to Mabel Washburn and Charles Wilson. His parents migrated to Southern California in 1930 with him and his sister Eileen, settling in West Los Angeles. During his school years, Guy was active in many sports, primarily football and track. During this time, his two best friends were of Japanese descent. When World War II started, their families were sent to internment camps. When Guy found out one of the families had been sent to Manzanar, he and his father started making annual treks to Manzanar with a pickup truck filled with fruit, vegetables, and clothing for the family. This was a first glimpse into the kind of man Guy would become.

At Guy’s high school graduation, he had his draft notice in his pocket as he received his diploma. While not seeing combat, he always stated that the GI Bill “was the best investment the government ever made” as it allowed him to go to college and eventually get his teaching credential at Fresno State University, where he met and married Norma.

After teaching high school and coaching in Ceres and San Jose in California, Guy and Norma took a leap of faith in the spring of 1957 when he took a job as teacher and JV football coach at Tahoe-Truckee High School. Guy remained at TTHS as dean of students, teaching science until the summer of 1971, when he “retired” to pursue his passion for building. After leaving the education life, Guy built many homes in the North Lake area.

He was beloved by many students, not only as a great teacher and coach, but as a caring man who went the extra mile to help students during tough times in their lives. It is still quite common to have students from his years in education relate how he was such a huge influence in their lives.

Guy was an avid outdoorsman, and for many years you could find him fishing with his buddies George Edmondson, Jim Fortney, and Wayne Scholl, or hunting, hiking, and backpacking in his beloved Sierra Nevada mountains. In later years, he and his wife Norma traveled the world, mostly on cruise ships. Wherever they went, they made friends and lit up the room. They were always telling everyone: “We’ve been all over the world, but Lake Tahoe is the most beautiful place we’ve seen.”

Guy will be remembered fondly and with big smiles by all who knew him.