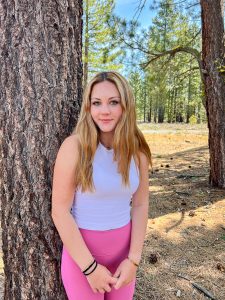 My sense of anxiety grew with every ring as I waited for my mom to answer my call. When I finally heard her voice on the other end of the line, I frantically shouted, “I wasn’t even at the party!”

“Slow down, Callie,” Mom said. “What are you talking about?”

I took a breath and explained: On Aug. 6, a 16-year-old girl disappeared into thin air from an outdoor party at Prosser Reservoir. The Truckee/Tahoe community was in distress. How could someone be at a party one minute and completely vanish the next?

On the night that Kiely disappeared, I had been attending a party an hour away in Nevada. I had posted a picture of my friends and me on photo-sharing app VSCO and thought nothing more of it. That is until a few days after Kiely disappeared, when my mom showed me a Reddit feed.

“Is this you and your friends?” She turned her phone toward me, and the picture of us shined from the screen. “They’re saying it’s a photo from the Prosser party.”

Someone had re-posted my picture with the caption, “I’m collecting photos from the party Kiely Rodni attended.”

We brushed it off as a silly mistake, and I got a solid lecture from my mom on how nothing on the internet is private, and this is why we have to be careful, etc. Later, Mom checked in with me again, calling to say, “Homeland security was just at our house. I told them you weren’t at the party, but they are looking for anything at this point, and they saw the picture of you and your friends at a party.”

Shocked, I hung up the phone and a text message from my boss appeared. A sheriff’s deputy had reached out to her asking me to call him.

I called and told the deputy that I hadn’t been at the party and that I was sorry I couldn’t help more. I couldn’t believe one photo could get so misconstrued and land me in a missing person investigation. I felt guilty. All these people thought I had been there; I hadn’t. They thought I could help; I couldn’t. I felt powerless and exposed.

On Aug. 21, the YouTube group Adventures with Purpose posted on Facebook, saying, “Car is upside down in only 14 (feet) of water.” A Facebook post was the first way many of us heard they had found Kiely. The news was heartbreaking, but our community and Kiely’s family finally had closure.

Throughout the search for Kiely, a country singer by the name of Ryan Upchurch from Nashville, Tennessee, had been posting ridiculous videos. The discovery of Kiely didn’t seem to slow him down.

This brings us to the phone call between my mom and me.

“Slow down, Callie. What are you talking about?” Mom asked.

“Do you know Ryan Upchurch?” I asked my now rather confused mom. “He found the picture of my friends and me from the night of Kiely’s disappearance, and somehow he found the version without blurred faces and is claiming that (my friend) Laurel is Kiely propped up dead.” I said this shaking on the last word. I was mortified. I didn’t know what to do.

“This will all blow over,” Mom said. “He doesn’t know what he’s talking about. In the meantime, don’t accept anyone’s requests on any social media platform.”

Friends as well as random people flooded my notifications asking why Ryan Upchurch was making videos of me. I had no answer to their questions, and tears filled my eyes. They filled my eyes for Kiely’s death and for the constant shame I felt ignited by people who never knew her. And the tears also filled my eyes for myself. How was I going to get out of this mess?

I got hundreds of comments on Instagram and messages through Facebook from people either warning me or praising Ryan Upchurch. My friend who was in the photo with me — the one whom Upchurch claimed was Kiely — was also being flooded with messages.

I was overwhelmed and scared. People started asking if I could be a part of their YouTube videos, to let them know my side of the story. I felt like I couldn’t be a part of that. I didn’t know Kiely personally, and it was wrong sharing a side of a story that came from a conspiracy theory. This wasn’t about me.

They found my past Moonshine Ink opinion piece. They claimed I was Kiely. It felt like my name and photo were all over the internet.

Today the speculation and conspiracy theories have died down, and Kiely has been laid to rest. What I went through was nothing compared to the harassment that Kiely’s friend Sami Smith, Kiely’s family, and her other friends went through. Many of them left social media completely in order to escape the harassment and conjecture.

~ Callie Ross is a senior student at Tahoe Expedition Academy.