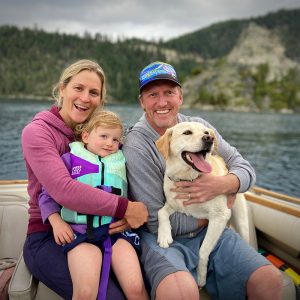 By Sara and Tal Fletcher

We are responding to Your Short-Term Days Are Over, written by Alex Hoeft on April 9. We enjoyed our conversations with the author, covered a lot of information about the Accessory Dwelling Unit above our garage, and were looking forward to having our story told publicly. While we were not misquoted and we respect that the job of a journalist is often to present a variety of perspectives, we feel that the majority of what we shared with her was left out of the article. Ultimately, our position has not been fully represented so we hope to share a more complete story here.

The Town of Truckee has conflated the two important issues of 1) solving the workforce housing crisis and 2) limiting the negative impacts of short-term rentals. They have received numerous complaints about unruly, disrespectful STR guests, and apparently feel that by banning certain homeowners from using their property as STRs, they will “unlock” potential long term housing options. We aren’t aware of any data that supports this quixotic, overreaching decision. We will be negatively impacted by the town’s choice to single out a small class of homeowners in a supposed effort to solve a problem that won’t be solved by the new rules.

We bought our home in 2003, with one of the most valuable features being the additional living space (or ADU) above the garage, which was added with a building permit by the previous owner. It comprises the fourth bedroom and third bathroom of the house, with a separate entrance and kitchenette. From 2003 until 2014, we used the space for long-term tenants. After we got married and had a child, we both needed home offices and were no longer able to offer the space to long-term tenants; our needs had evolved and we were primarily using the space for ourselves or offering it to our friends and family. In 2014, we learned of Airbnb as a tool to utilize spaces like ours for part-time rental income that worked around our schedules. With the increasing costs of living and raising a family in Truckee, we’ve come to rely on this extra income to be able to remain in the area.

From the beginning of our occasional STR hosting, we have been fully transparent and have played by all the rules, even as they have changed. We participated in Truckee’s permitting process, paid our TOT and income taxes, and have maintained a 4.9 star rating through hosting hundreds of guests. When Covid-19 changed the world, we immediately shut down our rental, and as things began to open back up, we did so cautiously and respectfully. Many of our neighbors use our space when their friends and family visit. We’ve never had a single noise, parking, trash, or other complaint. Our typical guests are one or two people with one car, usually in town for a few days to ski/bike or attend a social or work event. We see ourselves as a vital option for individuals or small groups who choose not to stay in a hotel and don’t need a multi-bedroom house. We live on-site and can control all four of the biggest complaints about other STRs: parking, trash, capacity, and noise. We encourage our guests to support our friends’ local businesses, whether they be restaurants, retail, or other products and services.

The Town of Truckee has the admirable goal of trying to reduce the workforce housing crisis, and we appreciate the creation of an incentive program for those who are able to convert their STRs to long-term rentals. Unfortunately for a number of us, taking advantage of this program is not an option; instead, the town is punishing homeowners like us for continuing to use our homes according to the terms of our permits. We support the town’s workforce housing goals, and previously spent 11 years offering our extra space as affordable long-term housing to locals. However, the town’s sudden arbitrary decision to ban homeowners like us from hosting occasional STR guests will have negative unintended consequences without any of the benefits it is trying to achieve. Seana Doherty, Truckee’s housing program manager, has even admitted the town doesn’t have any data to correlate the ban on our ADU usage as a part-time STR with an increase in long term housing.

Wait, wait, wait!! … So the town has made an arbitrary decision that prevents a group of homeowners from utilizing their property as they’ve been doing for years with the town’s permission, that benefits the community (via TOT and visitor dollars directly spent locally), in an effort to alleviate a problem that wasn’t being caused by those homeowners or their guests in the first place, and now they’re admitting that they don’t have any data to support their decision?!

Really, we see ourselves (respectful, on-site, responsive) as what would’ve been this town’s ideal short-term rental hosts, and yet we’re the ones that are being asked to shut down. We hope to keep the conversation open with town council members and other community stakeholders so that together we can work toward alleviating the housing crisis without punishing a small group of local homeowners.

~ Sara and Tal Fletcher met at the top of KT-22 in 2010 and got married at Squaw in 2014. Tal moved to Truckee in 1993 while Sara moved to California from Seattle for college in the mid-90’s, eventually settling in Truckee. Sara works in the digital health industry; Tal is a former ski guide, documentary film producer, and local small business owner who has been working in real estate for the past 5 years. They are both avid outdoor athletes and feel fortunate to be raising their almost-four-year-old daughter in this community.