Home News On Fire The Battle for the Green Bubble

Forests of the Sierra Nevada are witness to tree mortality at a crippling rate. Not the best news when you’re a state full of wildfire what-ifs. But the last living green forest — aka Tahoe — may provide answers.

California’s Tree Mortality Viewer displays the gloomy view. The Sierra Nevada Conservancy noted a jump from less than six trees per acre killed each year across California between 2006 and 2014 up to nearly 40 trees killed per acre in 2015 and 2016, mostly in the Sierra Nevada. Certain regions in Fresno, Madera, and Mariposa counties have had 40-plus tree deaths per acre as of December 2018.

Tahoe groups have zoned in on what’s been dubbed “the green bubble” — a portion of the northern Sierra Nevada around and just west of Tahoe, putting it under the watchful eye of the Tahoe-Central Sierra Initiative. The TCSI is a band of organizations and agencies devoted to not only improving forest restoration across the Tahoe-Sierra region but also accelerating the pace and scale of such work.

“If you look at the tree mortality maps that they’re creating every year … the trees are dead now up to South Lake Tahoe,” Brown said. “Then also watch the progression from the north. It’s working its way south. This place … is the last green forest left in the Sierra Nevada.”

Brittany Covich, the SNC’s policy and outreach brand manager, pointed to California’s drought as the culprit for creep of tree mortality. California experienced what the U.S. Drought Portal refers to as D4 or “Exceptional Drought” from 2014 through 2017.

“As the drought continued, we saw a number of changes happening,” Covich said. “For example, the first initial wave of tree mortality we saw was at a certain elevation band. As time passed, we would see it in different elevation bands. And in addition to that we saw a change in the different tree species that were being lost to tree mortality. You … have trees that were dying due to drought and water stress. There were a whole bunch of different factors that were playing into that.”

The SNC noticed early in the drought that the southern counties of the Sierra Nevada were hit first and the hardest. That, Covich explained, had a lot to do with the fact that the northern Sierra receives more rainfall. Yet although forests in El Dorado County and up haven’t suffered as concentrated of tree loss, it doesn’t mean they couldn’t.

“If we get another significant drought,” Covich said, “[or] if our forests are still in an unhealthy state, they could succumb to those stressors pretty significantly.”

It goes without saying that to a state already sensitive to catastrophic wildfire, mountains full of dead and dying trees seem to pave the road for future fire. But while wildfire attacks from the exterior of a tree — wind-driven sparks or a downed power pole, for example — a more ominous threat comes from within, and it’s contributed heavily to creating the perfect wildfire wick.

“It’s [human] mismanagement that exacerbates not only drought conditions, but it exacerbates and pre-disposes trees to bark beetles,” said Tricia Maloney, forest and conservation biologist with UC Davis.

She summarized it: Forests are overgrown and overcrowded due to 100+ years of fire suppression and extensive logging that replaced healthy and established trees with closely packed small-diameter ones. Drought contributes to dense water-stressed stands of trees, essentially creating a forest of “straws,” she said.

Enter bark beetles, attracted to chemicals emitted from trees in a drought-stricken panic, happy to bore inside, lay eggs, and munch on the inner tree bark and root systems.

Bark beetles aren’t always the bad guys. Those in the Tahoe Basin are native, endemic species, and during the good times, they perform necessary maintenance throughout the Sierra Nevada’s forests by attacking old or weathered trees and making room for younger tree generations to flourish.

But with overcrowded forests, trees are more susceptible to native beetles which have been able to thrive in recent drought conditions. Solutions go back to the TCSI and its unique ability to bring together agencies, a university, and nonprofits to speak a common forest management language; it’s something other organizations across the state of California are eager to implement as well.

“We thought if we can really dig in here, if we can really change the state of our forest in the TCSI area, we have the potential to be able to apply techniques here that could keep this area from succumbing to significant amounts of tree mortality like in the southern Sierra,” Covich said.

The TCSI is utilizing all the tools in their toolbox. Efforts are catered to different stands of trees, depending on what the best approach is for each spot. That means mechanical thinning or hand-thinning, which involves taking out small materials like shrubs and brush or limbing trees; prescribed fire; or utilizing natural ignitions like lighting. All in an effort to reduce forest fuels and give wildfire a more difficult path to new tinder.

The U.S. Forest Service’s French Meadows forest restoration project, going on now, is an example of mechanical equipment use, removing trees and freeing up space in a critical municipal watershed. And the TCSI also undergoes prescribed fire projects in the Cables Creek watershed.

The 9,000-acre Sagehen Experimental Forest Project combines science and land management, bringing together multiple mindsets to create an all-encompassing management plan. Sagehen partners with the USFS and the Tahoe National Forest; the coalition has devoted time and manpower to mechanically thin parts of its forested area and is using prescribed fire for maintenance.

“We know what we’re working on,” Brown of Sagehen said. “And we know the problem. And we know, we don’t know — we think the approaches that we’re taking in our part of the world is helping us get to a better place.”

Maloney thinks the approaches are working, too, saying that Tahoe Basin forests are “a little ahead of the 8-ball” when it comes to restoration treatment thanks to funding in the region.

“There’s still plenty more treatments to be had,” she said, “but I feel like a lot of the work in the basin … they’ve set the stage for our forests in some places to be more resilient to drought, to fire, to bark beetles.”

This summer has marked the launch of our On Fire series, which delves into the issue of wildfire through a spectrum of lenses, including public education, breakdown of the science, graphic depictions, unique personalities, and more. 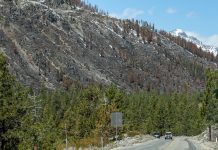 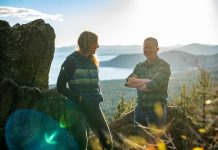 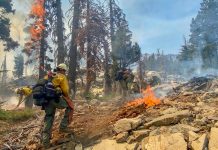 The Battle for the Green Bubble
Sports & Outdoors

The Battle for the Green Bubble
Sports & Outdoors

The Battle for the Green Bubble
Food & Drink

The Battle for the Green Bubble