Home Columns Nature's Corner In a Torpid State of Mind

With winter coming, hopefully soon to help put out remaining fires, birds will migrate and bears will hibernate. Which brings me to the next subject matter of Nature’s Corner — the black bear.

I knew that if I ever researched the black bear my first inquiry would have to do with its size and diet. I mean, honestly, how does a newborn black bear weighing only 8 ounces, the size of a rat, turn into a 200- to 400-pound adult by primarily eating vegetation?

Of course! So I called him.

The Bear Whisperer would be Steve Searles, former wildlife officer of the Mammoth Lakes Police Department (he resigned in summer 2020), a man who has become so familiar with local bears in the area that he can differentiate one from another. Old bear. One-eared bear. Ugly bear.

His main job? To retrain bears that have become habituated to man’s ways and to steer them away from tempting garbage bins, unlocked cars with food inside, even vacant houses, persuading them back into the forest. His tactics? Yell. Sound a loud horn. Use pepper spray. Set off fireworks. Only if a bear does too much damage over too many years will a police officer be summoned to put down a persistently harmful bear. If a bear is minding its own business, however, Searles advises to simply leave it alone.

But back to the question that has always puzzled me. How does such a small animal become so big?

Before a cub even begins to eat solid foods in the wild it nurses during its first year, taking in rich, fatty milk. Compared to cow’s milk, which contains 3 to 5% fat, bear’s milk weighs in at 20 to 25%. This naturally enriched milk is then supplemented with vegetarian fare, such as grasses, tubers, and roots, but also protein-rich insects, bird eggs, fish, and small mammals. Still, bugs and grass? It seems a mystery how Ursus americanus can grow so large so quickly. Take into consideration, though, this is an “in-no-rush-for-the-day” mammal, and it becomes obvious why (as an adult) it doesn’t need the high caloric diet that other mammals might require.

The black bear is all about consumption, its main objective to gain as much as 30% of its mass in fat before winter dormancy. Feeding all summer long and even more fervently in the fall is part of a black bear’s seasonal routine. Such hyperphagia escalates the caloric intake to 20,000 or more calories a day. In Searles’ own words: “A bear is basically a stomach with four feet.”

For the female, or sow, gaining weight is intrinsically tied to motherhood; pregnancy depends on weight gain. After mating, if a sow does not attain sufficient body fat or weight during the summer and fall, any embryos may not implant or grow well. Because of this unpredictability, bears are not known for overpopulating.

So, black bears gorge. For winter’s sake. For reproduction. For survival.

During its winter hibernation phase, which is more like semi-hibernation, also known as “torpor,” a black bear’s heart rate drops dramatically. Yet, bruins aren’t completely asleep; they still respond to danger — albeit, more sluggishly — and amazingly, sows still give birth. During this period, a bear might venture out of the den to move about and stretch, but a pregnant female rarely leaves her home, the space readied for her new cubs. The den, created in large rock crevices, under downed trees, or dug into softer soils near roots, might be tight, but roomy enough to house the sow and her litter.

In mid-winter, January or February, one to three cubs are born, the female entering motherhood around the age of 4, producing additional offspring every other year. In spring, the 3- to 4-month-old cubs emerge from their cozy den, weighing approximately 6 pounds, as much as a bowling ball.

One might think that once cubs appear in the wild, they are on their own, but why leave home when the mother is willing to nurse, shelter, and protect? Young bears continue to suckle from the mother’s teats through their first summer and sometimes well into their second year. They may even nurse after being taught how to forage in the wild.

When in the wild, cubs learn how to claw at downed logs to glean beetles, ants, ground wasps, and insect larvae. Or they learn to tug at the leaves of mule’s ears, skunk cabbage, or aspens. They may dig up grasses, roots, and tubers. Berries are favored as well, from manzanita, serviceberry, or currant bushes. If an opportunity presents itself, a mother and cub might even be spotted dragging a fish from the edge of a Sierra mountain lake.

To summarize, cubs are born in January or February, emerge from the den in spring at 3 to 4 months of age, and remain with their mother through the following winter. After a secure 16 to 18 months, they are then pushed out to find a territory of their own.

And the dad in all this? His role is strictly to perform his initial perfunctory duty and leave. Deadbeat dad-bear so to speak.

To my second question about black bears.

If a black bear is for the most part residing in its den all winter, how does it balance its caloric requirements? And does it ever urinate and/or defecate in the den?

Answer: During torpor, a black bear continues to survive off its stored fat and reabsorbs its wastes. Searles describes a very interesting function that occurs in hibernations: While in torpor (beginning around Halloween), the bear makes a “fecal plug” consisting of feces, hair, dead intestinal cells, and bedding material. This plug, blocking the gastrointestinal tract, allows the sleepy bruin to remain in its den for up to six months, without eating, hydrating, defecating, or urinating.

Black bears are among the most intelligent land animals in North America. Plus, their sense of smell is so keen that they can detect a scent 3 miles away. Because of this hypersensitivity and intelligence, black bears can become habituated to human practices. Leaving garbage or compost piles exposed, not covering or locking dumpsters, hanging bird feeders within reach, or walking away from food in unlocked cars will attract any hungry bruin. It is these temptations that most often lead to contact with humans, mainly their refuse, which can tragically end a bear’s life.

For example, in Nevada, if a bear makes a nuisance of itself it might not have the luxury of being transported elsewhere and instead be slotted for extermination. Madonna Dunbar at Bear Smart, one of the Incline Village General Improvement District’s environmental programs, says a bear can be (but isn’t always) shot for simply entering a building. Her motto: Be proactive, not reactive. As in, don’t tempt bears with human garbage; put out your garbage cans the morning of garbage day, not the night before. Don’t tempt them with a greasy barbecue. And if you so desire, do get a bear box for your waste, a container that can be installed at the end of a driveway and that’s fully bear proof. If you’re new to bear country, it’s important to educate yourself about living in harmony with these creatures.

We might be frightened of the big black bear, especially the first time we see one; they’re large and intimidating. But these hefty Sierra mammals, for the most part, simply run away. Only habituated bears will hang around humans, knowing a good meal when they smell one. Sows, however, might have a different agenda. If a female sees an intruder approach her cubs, she may take a few steps forward, while snorting, huffing, blowing, moaning, mooing, or talking with a “ruhr” sound, says Searles. This is known as a “bluff charge.” Males may employ these noises too, as well as protrude their lower lip. But with all this huffing and puffing and carrying on, black bears are generally known to be non-confrontational, at least in the Sierra.

Lastly, Ursus americanus is incredibly stealthy. A mama and three cubs could be walking a mere 20 feet from us and we wouldn’t know it. A big old male could do the same and we’d most likely miss it. One hundred and fifty to over 500 pounds of muscle, bones, fat, and fur, striding along in our midst, and we may not even realize it was there.

A few more things of note: Black bears can live in the wild for 20 years or longer and while they are most often black in color, they can also be cinnamon, light or dark brown, or even blonde. An important ecological contribution of the black bear is berry eating, as the seeds expelled in feces aid in dispersing plants to grow in a rich fertilizer.

To see more of Searles and his past work with black bears, check out Steve Searles, Bear Whisperer on YouTube. 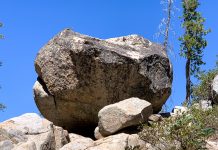 Hitchin’ a Ride: Boulders on the Move 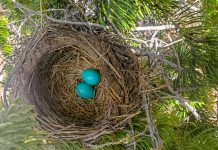 In a Torpid State of Mind
Sports & Outdoors / Wellness
6:00 pm