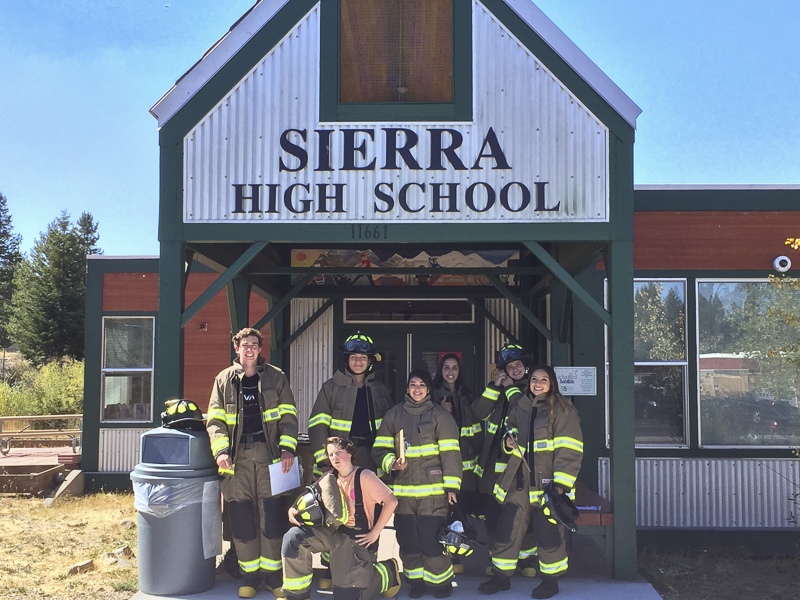 As of 2016, only seven percent of firefighters in the United States were women. Compare this to the nursing workforce, where women make up 91 percent. Johanna Nevarez Peinado, 16, a junior at Sierra High and resident of Kings Beach, has recently changed her desired career path from nursing to firefighting, all because of Sierra High’s Public Safety Pathway.

The program, which is new this year, partners with Truckee/Tahoe fire stations to teach high school students the intricacies of becoming a fire fighter. Students receive Career and Technical Education (CTE) credits through the course. These credits provide students with a head start on college and their future careers.

Comprising roughly 60 students, Sierra High was named one of 35 model continuation high schools for 2017, an acknowledgement they have received for the past 10 years. “Each of these schools is recognized for operating innovative academic programs that help prepare at-risk students for 21st-century careers and college,” a press release from Tahoe Truckee Unified School District said. “The schools were selected based on a comprehensive and competitive application process that involved effectiveness, assessments, and use of data. The process included a peer review panel and on-site visit.”

Upon transferring to Sierra High at the start of the 2016/17 school year, Peinado was almost certain she wanted to pursue a career in nursing or crime scene investigation — an interest she admitted came from television shows that glamorize the industries.

The program’s teacher, Trent Kirschner, received a grant for the class that provided students with, among other things, their own firefighting gear. “It turns out the uniform and helmets are so heavy,” Peinado said. She could not express enough how much her respect for the firefighting community has grown since starting the class and how supportive the community has been.

Peinado has since earned four valuable certifications through the class and was also inspired to become a member of FEMA’s local Community Emergency Response Team (CERT).

The response team is completely separate from her class at Sierra High and has trained Peinado how to respond during an emergency in Truckee/Tahoe. She is now able to organize volunteers and take the necessary precautions if disaster were to ever hit the Basin.

“Johanna completed the CERT program and was sworn in as a CERT team member. She managed the Spanish speaking casualties in our final test scenario and did a great job!” Kirschner said.

Most recently, CERT was called in to fill sandbags for community members who experienced flooding during the 2016/17 storm cycles.
What does the future hold for Peinado?

Sierra College (not be be confused with Sierra High) offers a firefighting major that Peinado would love to pursue upon graduation. She then wants to come back to the community where the inspiration for her career began.