Home Columns Flip's Friends What Does the Burner Bunny Say? 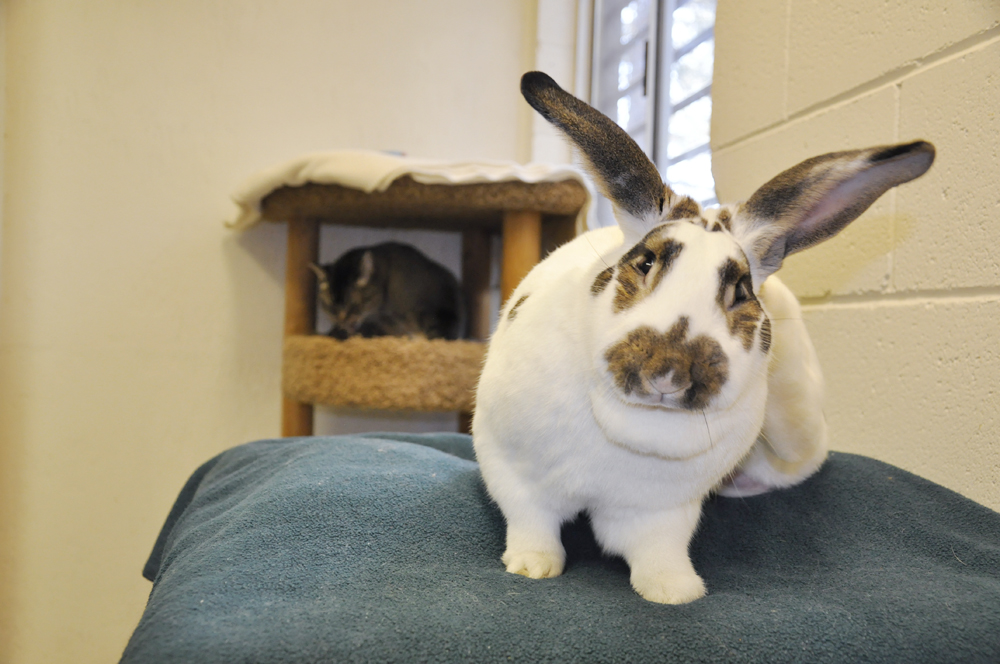 Just down the road from the North Tahoe Regional Park is the Tahoe Vista Animal Shelter. The shelter is run by Placer County Animal Services and relies heavily on volunteers and donations from the Wylie Animal Rescue Foundation to keep its operations running smoothly. When the weather is warm I like to play a round of disc golf at the park, visit the animal shelter, and stop at nearby Sancho’s Taqueria for some fish tacos. It’s generally a summertime activity, but with no snow and temperatures in the 50s, we were able to walk around the park in our boardshorts this month. If it stays this warm I’m afraid I may start shedding.

The shelter isn’t much bigger than Sancho’s (not that size matters). The first friend we met was Graham, a pit bull mix that has been at the shelter since May 8. He was working the front counter with a mutt named Sugar. Graham is not only handsome but loves kids and was able to be handled by the 6-year-old human who lives at my house. We got a chance to take a stroll in the park with Graham and were impressed with his manners. Graham really enjoys his walks. He responds to his name, sits on command, and takes his treats like a gentleman. When a Girl Scout troop visited the shelter, Graham played the role of ambassador. He is a superstar who deserves a home in 2014.

After our walk with Graham, we checked in on the kitties. The shelter had four cats including Cowboy, a housecat/mountain lion hybrid, and a floppy eared cat named Patrick. Patrick turned out to be a rabbit who thinks he’s a cat. He hangs out with the cats. He plays in the cat furniture. We didn’t hear him meow but I think he is working on that. Patrick has been at the shelter since Burning Man, turned in right after the festival by a fellow Burner. He seemed glad to have experienced the event once, but is ready to settle down. When reached for comment Patrick said he was “too soft and furry” for the harsh climate on the Playa. The staff describes Patrick as “mellow for a bunny.” We have no indication if that is because of any particular experience in the Black Rock Desert. Patrick is great with kids, cats, and the right dog. He’s box trained and is the softest friend I have ever met.

Cowboy watched suspiciously from the top of the cat furniture while we played with Patrick. Cowboy has markings that indicate he may be part Abyssinian. He’s a friendly, sleek, athletic looking fella.

The Tahoe Vista shelter partners with WARF to find foster homes for many more cats and dogs than you will find at the shelter. You can find these animals at tahoewarf.com or petharbor.com. The Tahoe Vista shelter is always looking for dog walkers and foster homes for their animals. The animals can get stressed in a shelter environment and getting a break, even a temporary one, and some exercise can go a long way.

What Does the Burner Bunny Say?
Family
12:00 am

What Does the Burner Bunny Say?
Arts & Culture