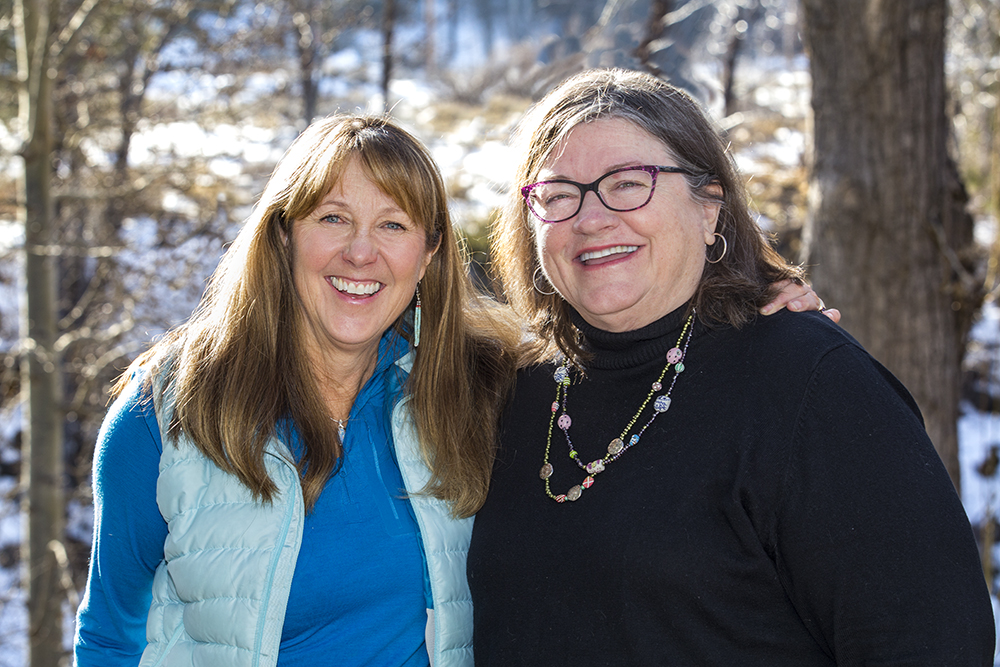 “I don’t think my Deb Kelly is your Deb Kelly,” said Marianne Porter, Moonshine’s Tahoe Stories columnist, after completing her interview with Deb Kelly-Hogan. Upon a little searching we quickly learned that there are two equally impressive women in Truckee with the same name — Deb Kelly and Deb Kelly-Hogan.

It might be a small world or maybe serendipity, but we took the miscommunication and ran with it. Behold our first ever Tahoe Stories double interview with two powerful Truckee business matriarchs named Deb Kelly, who both happened to migrate to the area from Ohio; and this town is big enough for the both of them.

DEB KELLY is the matriarch of Kelly Brother Painting. She arrived in Tahoe in 2003 and never looked back. She was also the family business’ marketing director for the last decade, and continues to be active in the community through her work with various nonprofits, such playing the role of Mother Nature for Trails & Vistas.

How did you get to Tahoe from Ohio?

DK: I walked! I was 53 and having a mid-life crisis and my children were pretty much all gone. I had one child left in Ohio who was an adult and so I left one day with a backpack on my back and my dog and I walked about the same distance as the El Camino, that was about to St. Louis.
It was late fall, and I had been camping, so I flew to Tahoe [from St. Louis] and landed on my oldest son’s steps and said, ‘wouldn’t you like to take me in?’ I had no money or anything.

How many days were you walking before you got on the plane?

I didn’t have a car for two years. I worked at Squaw for Keoki [Flagg] for a while. And I worked for Ruffles and Ruffnecks and I always loved marketing and my two sons were starting Kelly Brothers Painting.

Tell me a little about your family?

DK: I have two and two — two sons and two daughters. Jill lives in Ohio. Bill, Kevin, and Erin live in Tahoe.

At the time I moved to Tahoe I was divorced and I found out my ex-husband was dying. I didn’t want my kids’ dad to die so I said, ‘if I rent a house will you come out and stay?’ He had five wonderful years before he died in Tahoe. It was really funny because the boys arrived first and then in 2002 Erin arrived and in 2003 I arrived and in 2005 their dad arrived. He was a real big help with the company and the payroll office.

Then my kids started having children and I have eight grandkids now.

I’m curious what you think about how Truckee/Tahoe has changed since you got here.

DK: I think Truckee is an amazing place. The people here, there’s a sense of good. My high school girlfriends came to visit and they said ‘everyone here is so nice and so friendly.’ I was really amazed when I moved here by how family oriented everything is.

A thing I worry about is that we’re growing too big, but growing and evolving is part of life.

When DEBBIE KELLY-HOGAN speaks, her uber-bubbly personality lights up her face, a favorable trait that propelled her into a variety of jobs in the Tahoe ski industry that spanned close to 26 years. In July 2006, she left the ski industry and changed paths, studying accounting to work alongside her husband Michael Hogan at their revegetation business, Integrated Environmental Restoration Services in Tahoe City. Kelly-Hogan also does bookkeeping for a few local contractors.

When did your lifetime love of Lake Tahoe begin?

DKH: My parents bought a summer cabin in Carnelian Bay in 1960 when I was three years old. The previous year we moved from Dayton, Ohio, where I was born, to Livermore, California. We spent every summer at Tahoe, all summer long. By the time I was 16, I started working summers in Tahoe.

What was your first job?

DKH: My very first job was at the Ponderosa Ranch in Incline Village. It was a replica of the ranch house and set of the long-running TV show Bonanza. Of course, the famous Cartwright family consisted of the dad Ben, Adam, Hoss, and Little Joe. Hoss was a big guy, so they named their burgers “Hoss burgers”. Two of my three sisters and I worked there selling Hoss Burgers. I would drive us in my parents’ car.

How did you get involved in the ski industry?

DKH: I graduated from Chico State in 1980 with a degree in Healthcare Administration, then moved to Encampment, Wyoming, for the summer to work at the A Bar A Ranch with my best friend Julie Mauer.

After graduation, I moved to my family’s cabin. I applied for jobs at Squaw Valley and was hired to be a lift operator. I was not cut out for it. Halfway through the winter I got another job at High Camp. When ski season was over, I planned to get a real job and found an ad in the local newspaper for an assistant personnel manager — I applied and got the job.

After two years, I was asked by the marketing director to be the first sales manager for Squaw. I got to travel all over the country to attend ski shows. We marketed the area as Ski Lake Tahoe in a shared booth with Heavenly, Northstar, Alpine, and Kirkwood. If we went out of the country, we were Ski USA. When VIPs stayed at Squaw, I’d tour them around the mountain. I stayed until 1990.

How did you make the move over to Northstar?

DKH: When I left Squaw in 1990, I worked at the new Resort at Squaw Creek for three years in conference planning. One day in 1993, I got a call from Bill Jensen at Northstar and he asked if I’d like to be their Human Resources Director. I took two weeks off between jobs, joined Michael where he was completing his degree at UC Davis, and spent every day at the library reading a Human Resources textbook cover to cover.

These interviews have been edited for style and clarity.

Do you have a favorite Tahoe hideaway?

DKH: I love Sugar Pine Point State Park. It’s literally right out my backyard in Tahoma. It has the most beautiful single track trail along the lake.

DK: You know one of the places I always take people, it’s a garden over in Incline and the water runs through and it is so beautiful. I don’t know the name of the nursery, but it is across from the court house.

How about sports and activities?

DKH: In winter, my favorite activity is cross country skiing. In summer, I love both road and mountain biking. And I’ve always loved gardening. We have a house in Sierra Valley with a big garden. Michael works mostly from there now, and I rotate between Tahoma and the Valley.

DK: I love to hike and to camp out under the starts. Not that I do that often, but that is my favorite thing to do here.

What’s something you remember that is no longer here?

DKH: There was a Jimboy’s Tacos in the middle of Kings Beach with a walk-up window at the beach. It was a big deal. We’d get four tacos for a dollar. There was a movie theater by the beach and a place to go to concerts where the convention center is now.

DK: The beautiful trees on that corner [Pioneer Center entrance] — that really ticked me off because it is right where I drive each day. It broke my heart that they did that.

Two Deb Kellys are Better Than One
Community / Food & Drink
12:00 am

Two Deb Kellys are Better Than One
Arts & Culture

Two Deb Kellys are Better Than One
Arts & Culture