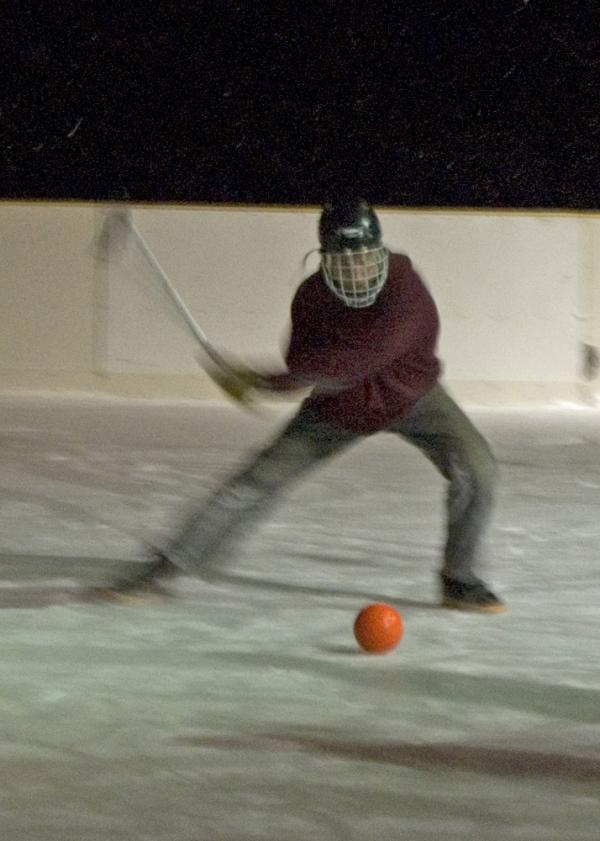 For over 75 players and fans Tuesday night is broomball night at the Truckee Ice Rink at Regional Park. The ice is freshly zambonied and smooth and the temperatures are cold. Truckee local Larry Drace gets the fire started in the fire pit and chases down loose balls that get sent over the boards on the ice rink. Fans and players not in the game line the rink to cheer on their team and heckle the referee. Players slip and slide on the ice chasing what looks like a mini soccer ball. It’s a sport requiring finesse and athleticism that can also resemble The Three Stooges on ice. It’s broomball and there is nothing in Truckee quite like it.

The origins of broomball are vague but most agree it can be traced to Canada in the early 1900s. The sport was originally played with a small soccer ball and corn brooms. The game, roughly resembling hockey, grew and made its way to the United States in the 1930s. The first games in the states were played in Minnesota which to this day has the largest concentration of broomball teams in the nation.

There are scattered reports of broomball being played at Squaw Valley’s High Camp, at a pond at Sugar Bowl and a small league played in Reno in the 1990s but the origins of Truckee broomball can be traced to the inception of the Truckee Regional Park ice rink in the winter of 2001-02. In the past the Truckee Donner Recreation and Park District had flooded the basketball courts at Regional Park and depended solely on Mother Nature for ice. This provided anywhere from three to 10 days of good skating a year. In 2001 the district took it to another level. They bought a used chiller and built a system over the existing basketball court. The system was permanently installed in 2002 and by then broomball in Truckee had already begun. Beyond broomball the rink has averaged 8,000 to 10,000 skaters a year since that first season and now offers kids hockey as well as skating lessons.

When the rink was first built Recreation Superintendent Dan O’Gorman was approached by local broomball aficionado Lou Laverty and the league was born. Lou grew up in Minnesota playing hockey and was introduced to broomball at an annual charity tournament in Colorado. It didn’t take long before he was hooked. Lou and Dan promoted and ran the league with Lou doing most of the officiating. As the league grew Lou stopped officiating but never stopped being a large proponent of the sport. What would you expect from a guy with a customized broomball license plate?

Broomball at its finest occurs on the slipperiest ice surface you can create. The Truckee Rink is resurfaced or ‘Zambonied’ twice before most broomball sessions. The first run scrapes a thin layer off the ice and a second pass leaves a thin water layer that soon freezes uniformly. On a good day you can barely walk on the ice without falling. That’s where the shoes come in.

Most broomball shoes resemble basketball shoes. The older versions look like the famous Chuck Taylor basketball sneakers while the newer models look more like today’s basketball high tops. The difference is on the bottom. Broomball shoes have small spongy bristles on the bottom to increase ice traction. The spongy suspension makes for one of the most comfortable shoes you will ever wear. So now you’re on the ice, it’s slippery, and you have your broomball shoes on. How do you play this game?

In a basic sense broomball does resemble hockey. Two teams try to hit the broomball into the opposing team’s net. The goal is slightly larger than a hockey net and the ball a softball-sized soccer ball. Teams can kick the ball but the only way to score a goal is by hitting the ball in the net with your stick. The broomball stick is similar in length to a lacrosse stick with a small triangular plastic head on the end.

On Tuesday nights the action ranges from the athletic to the comical. Players will smoothly pass the ball across the ice to an open teammate for a one-timer goal. A shot from center ice finds the upper corner of the net for a goal. The goalie dives and makes a tremendous save. Smooth action that would give the NHL a run for its money. What makes the great plays special is the action on the other end of the spectrum. A player all alone on the ice winds up for a shot and everyone braces themselves for impact only to watch him fall as he takes a mighty swing, missing the ball completely. Changes of direction are often the hardest as players end up like a cartoon character slipping on a banana peel spinning their wheels until hitting the ice.

The league has grown this year to eight teams with a waiting list. It is often called  the only league west of the Mississippi River but that depends on whether you think Minnesota is west of the Mississippi or not. One of the many reasons Lou enjoys broomball is the reduced injury factor when compared to hockey. There is no checking in broomball and after a game you may have some bumps and bruises but Lou prefers that to cuts and stitches. While some players joke about dreams of recruitment to a professional broomball team, most play for the love of the game and we all have to go to work the next day. Broomball isn’t just the game – it’s the people sitting around the fire pit on a cold clear Truckee night cracking their favorite beverage and catching up on the local goings on. We may play on ice in the coldest town in the country but one thing is certain: broomball is hot.