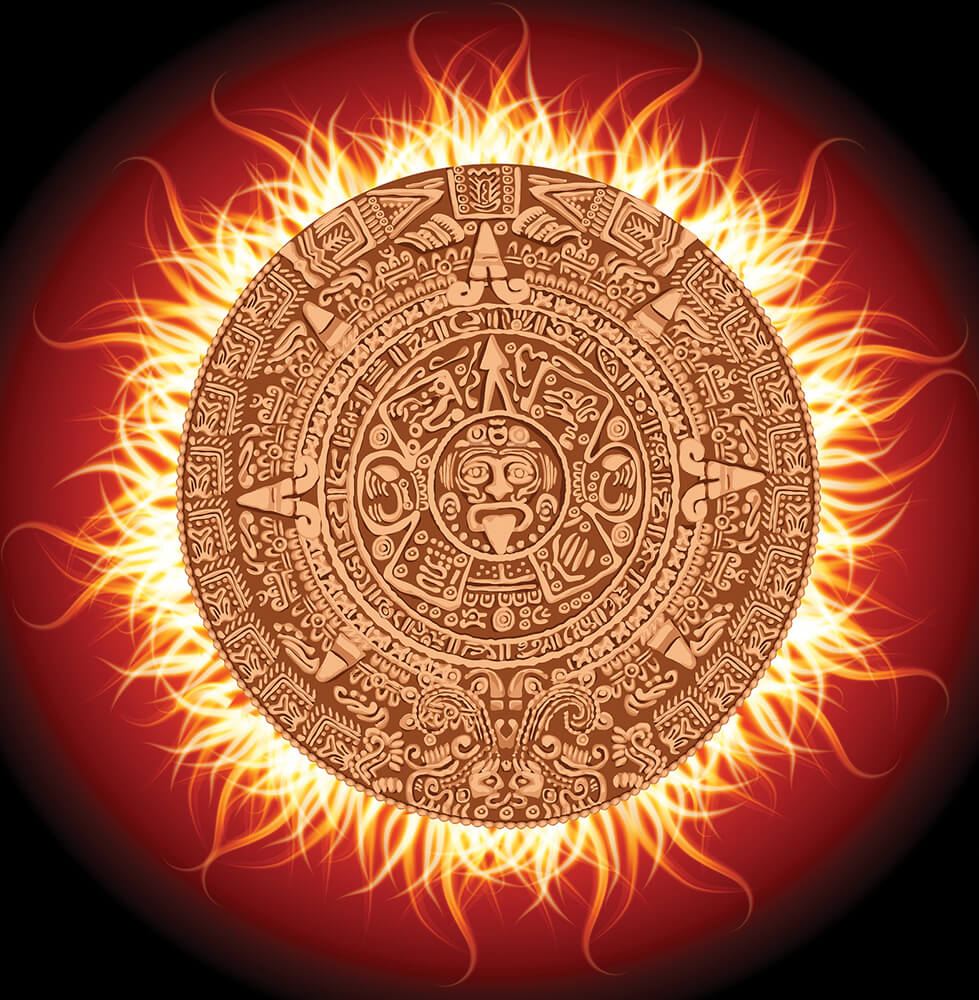 In a newspaper comic strip, two ancient Mayans stand in a temple, dressed in regalia. One of them holds the round stone carving of the Mayan Long Count calendar and says, “I only had enough room to go up to 2012.” The other looks at it and responds, “Ha! That’ll freak somebody out some day.”

The Mayan calendar, which ends on Dec. 21, 2012, has inspired fears of the end of the world. But the Maya, along with other ancient cultures such as the Hopi, Chinese, Hindus, Incans, and Aztecs, created systems, supported by myths, in an attempt to make sense of human existence. Many of these include predictions about a particular period in time often referred to as “the Shift in Consciousness.” However, unlike some Western myths, which have a belief that the world will literally come to an end, these ancient cultures employ myths of rebirth and cyclical timelines based on planetary alignment and astrological cycles. So, a lot of the brouhaha surrounding 2012 is because we have been trying to interpret the Mayan calendar with a Western mind, not because it actually predicts the end of time.

Renowned Truckee astrologer Robert Ayres said, “The expert mathematicians and astronomers of our present culture have examined the calendar and agree that the sophistication and level of detail the Mayans used is well beyond our comprehension.” He explained why Dec. 21, 2012, is such a big day astronomically. It is the end of the 5,000-year cycle the Mayans called the Long Count. It is also the end of the 2,160-year Age of Pisces and a 25,920-year cycle called “the precession of the equinoxes.”

“Dec. 21 is the end of the age of darkness. You hear all of this about the end of the calendar and ‘the poles are gonna’ shift’ … this doomsday catastrophic stuff is absolute bullshit,” Ayres said. “Think of it as rebooting the system. All of the programming is revitalized. It’s a new start point, the end of a 25,920-year cycle and the beginning of a new one. We’re being aligned with a new program that has to do with our next phase of spiritual evolution, of consciousness and the divine plan.”

The 5,000-year period is known in the Vedic tradition as Kali Yuga or Dark Age. Five thousand years ago, at the beginning of our acknowledged history, humanity had a direct window into the spirit world, but at that time, God or whatever you call It, cut the proverbial apron strings and humanity had to learn to think for itself, learn from its mistakes, and find out about its potential. (Some consider this the fall from grace. It is also known as duality.) As we moved into Kali Yuga, we sunk deeper into materialism and forgot our true, spiritual nature.

John Major Jenkins, author of “Maya Cosmogenesis 2012: The True Meaning of the Maya Calendar End-Date,” said, “If we’re due for any kind of a pole shift, it should be a pole shift in collective consciousness. We need to steer clear of that pole that wants us to keep living in dualism, to be fixated to that mode of culture that seeks to dominate other cultures around the world and instead shift our minds to emphasize a partnership society.”

On the weekend of Nov. 24, Don Alejandro, the primary keeper of the teachings, visions, and prophecies of the Mayan people, gathered in ceremony with other elders to help bless and consecrate a temple in New Mexico.

“This time is an opportunity to change our behavior to Mother Nature and to ourselves. It is not the end of the world or the calendar,” Alejandro said. “It is an opportunity to change and understand that we are all brothers and sisters, we all are the same value, we are all children of the same father with different ways of glorifying him. This is a time to unite ourselves and walk together, the way our ancestors did. It is the end of selfishness and imperialism.”

At this time, many of our systems are going through major shake-ups because they are no longer sustainable and aren’t in line with our emerging consciousness. These include government, religion, finance, education, health, and the way we live our lives. A great deal of the work we need to do as we move forward is the inner, spiritual work of freeing ourselves from the belief systems we hold onto. This is indeed a time of revelation, of unveiling the “limitations that keep us from realizing the grandeur of our being,” said Christian Steele MD, author of “Mastering the Power of Life” and teacher of an ongoing class on the ascension process at For Goodness Sake in Truckee. He defines ascension as “a raising of consciousness, returning to a perfect state of being.”

Futurist Barbara Marx Hubbard refers to the shift as a rebirth, and the first time in human evolution when humanity is conscious of its own evolution. “We live in a time when things will never be the same again. It is we who will preside over the changes and it is our own choices in what we do with our own consciousness that will govern whether that change is for good or for evil.” Hubbard and the Shift Network have created Birth 2012, a three-day event celebrating the birth of creativity, cooperation, wisdom, love, and a more enlightened humanity. Join this global planetary birthday party on Dec. 22 and move forward knowing we are all conscious cocreators of humanity’s evolution.

The Shift in Consciousness
Arts & Culture
12:00 am

The Shift in Consciousness
12:00 am

The Shift in Consciousness
Arts & Culture