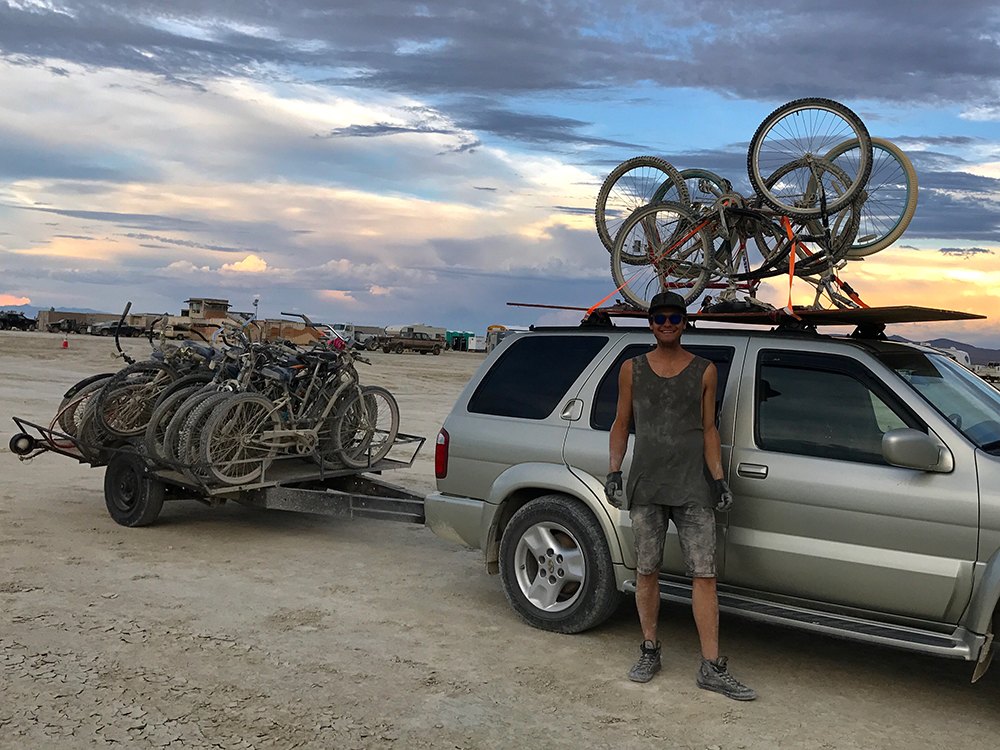 Often in today’s world we turn to social media to connect. And in the small, connected community of the Tahoe Basin, there’s one social media outlet that has yet again proven to bring people together: Truckee Tahoe People (TTP).

Maggie Shields thought it was a bear when she heard a noise outside her Truckee home one evening. But she woke up the next morning to find that someone had stolen her 10-year-old-son Rosci’s bike, which he rode every single day. Maggie doesn’t use Facebook, but neighbor Faith Smith offered to put a post on Truckee Tahoe People looking for a used bike for Rosci.

“The next morning [Faith] said ‘there’s a guy who wants to buy your son a bike’,” Maggie remembers. “I thought that was so kind.”

The guy was Shaun Frichette, a Tahoe business owner who’d had his bike stolen as a kid, too. His parents weren’t able to afford a new one for two more years, he said. He offered to meet Maggie and Rosci at Scheels in Sparks. On the first day he’d had off work in 40 days, he bought Rosci a Trek mountain bike big enough that he could grow into it and have it for a long time.

“He loves it,” Maggie said, “he’s never going to forget it. What an experience. I know it will stay with him his whole life.”

The Hitchhiker Giving Back

“Pretty soon I realized it was an awesome way to meet people who were unlike me, and learn lots of new things,” he said. “I hitchhiked from Vancouver, B.C., to the Yukon. I had a three-hour conversation with a Republican who was driving a pickup truck across Minnesota, and I’m pretty darn liberal … I spent the night in the bunk bed of a Serbian trucker watching Serbian sitcoms.”

He later moved to Lake Tahoe, and, while driving two hours a day to attend a wilderness first responder class in South Lake Tahoe, he dreamed up an idea: first, he imagined a sort of “super psychedelic free taxi.” But, his roommate, Jonathan Aylward, contributed a simpler idea: use blue painter’s tape to color their bumpers, signifying they’d always pick up hitchhikers.

Jonathan posted pictures of the idea on TTP, hoping others would follow suit. The result was overwhelmingly positive. Alan said he hopes that in the coming months more will take notice and begin to consider ridesharing as a part of daily life.

As a seven-year attendee of Burning Man, Squaw Valley native Gavin Lura was dismayed to hear about thousands of bikes left on the playa after the event last year. So, he and fellow burner Ally Bravo went back to the Black Rock Desert and salvaged 25 bicycles.

“For me it was, ‘All of these really useful things we used planetary resources to make are just gonna go to the dump unless people take action’,” he said. “Each individual neglecting a small personal responsibility is dumping a lot of responsibility on the people who work for Burning Man.”

Returning to Tahoe, Gavin removed the decorations and inspected the mechanics, replacing things like the bearings, which can become so filled with dust that people can’t pedal them.

“Every bike rides a little differently,” Gavin said. “An older, used bicycle is, in my opinion, a lot better than a new bike. It has some history and some character.”

He then used TTP to resell the bikes, asking only a small price to cover the time and resources spent to fix them. The response was overwhelming, he said. The bikes sold in two hours out of his Olympic Valley garage. One customer, Saulo Alejandro, is an Incline Village landlord who bought nine bikes to lend to his J-1 tenants so they can bike to work.

The experience stoked Lura’s passion for bicycles, and he approached Factory Bike at the entrance to Squaw at the beginning of summer, where he was given a job on the spot.

The Power of a Good Deed
Sports & Outdoors / Wellness