Home Columns Feel Good Story The One and Only RB

RB Bruce is a one-of-a-kind student at Incline Middle School for two reasons: He has a chromosome disorder that, as far as the experts can tell, no one else in the world has. He’s also been honored with his own special day at Incline Elementary and now Incline Middle School, because as his mother, Brandi Bruce, says, “He can teach the world that kindness is a superpower.”

RB — short for Robert Banyan — has a tiny bit of extra genetic material on one chromosome, and a tiny bit less than normal on another. At 3 years old, RB was still unable to speak, so his parents decided to have him tested. Specialists at Stanford Medical Center detected the chromosomal mutation using a microarray machine. In addition to speech, it effects his muscle tone and coordination. Through physical therapy, swimming, and hippotherapy — which uses horseback riding as a rehabilitative or therapeutic treatment — he has experienced slow but steady improvement over the years.

The speech limitations were especially hard. “He knew many signs and how to communicate in different ways and how to be kind, but talking was the hardest thing for him even though he had so many thoughts and so many words in his head, he just couldn’t get them out,” Brandi said.

By the age of 7, RB began speaking in full sentences.

“He works really, really hard to do the things that are easy for most of us,” said RB’s mom in a presentation she prepared to explain the abnormality to RB’s classmates. “He has a sensory system that is very sensitive to many things, that’s why he wears a hat,” she said. “He continues to work hard and gets better and better every day. But one thing that is easy for him that he doesn’t have to work hard at is being loving and kind. It is his nature.”

One of RB’s classmates is Evan, who has Down syndrome. Every year on March 21, which has been declared World Down Syndrome Day, people wear colorful socks in support of those with Down Syndrome. In March 2019, Brandi said, “We were rocking our socks for Evan to show support towards people with Down syndrome, when two of RB’s friends asked what his day was … His teacher said he doesn’t have a day because he’s the only one who has what he has.”

RB’s friends felt it wasn’t fair that their classmate didn’t have a special day; they thought there should be a day to celebrate him and his differences and strengths. The teacher agreed. The school declared April 20 4/20 PQ Day, named after the 4p and 20q chromosomes which are abnormal for RB. On that day they wore their socks once again, but this time they donned one long sock and one short. It has turned into an annual event, which Brandi calls the Tru Blue Movement.

The name came to her one morning as she was fixing a poster that had a blue strip of paper while preparing for a 4/20 PQ Day kindness presentation.

“I was wearing my new blue shoes and my husband was wearing all blue layers and it had been a year exactly since our  friend, Jeff Pearlstein, died on the mountain at Alpine,” she said. “I [happened] to reach for the blue shirt he gave me from India, and in a moment of epiphany the name just came to me. Jeff was the truest of blues, and RB the same, and Tru Blue was born. Living next to Big Blue (Lake Tahoe) was just [an] extra bonus.”

Brandi said that while she used to question why RB and his family have had to go through so many challenges, RB’s classmates helped her realize it was because when kids are around people with special needs, they learn how to become better kids.

“This is how a movement of kindness and compassion begins,” she said. “All because two 9-year-old boys chose to see beyond themselves.”

Tru Blue Day is now an annual event during which Brandi presents information to kids about RB and how he can be an example to them of how to be kind and generous with their friends.

“As a former special education teacher, I love that the Tru Blue philosophy promotes the power of kindness, which supports the positive growth and development of all students. Inclusivity for students with disabilities starts with kindness,” said Kari Michael, Incline Middle School principal. “The Tru Blue philosophy addresses character traits that are necessary life skills for positive living. It is key that the Bruce family rolled out the Tru Blue program in elementary school, before students started changing developmentally in middle school.”

Brandi believes that when folks are around people with special challenges, they learn from them and become better people and better friends.

“So, RB, just by being himself, helps others to be kinder and more compassionate,” she said. “I believe this is RB’s calling: to fill the room with love and kindness and make everyone around him a better person and better friend to teach others how to be Tru Blue. We want to share that superpower with everyone.”

One form of physical therapy that has been especially effective for RB Bruce is hippotherapy, which involves being on a horse.

When he started riding in the Kids and Horses program in Minden, Nevada, at age 6, he was only saying one word at a time. It was on the horse that he first spoke two words strung together in a command to his horse to “walk on.” As part of the therapy, participants play games and learn how to ride. 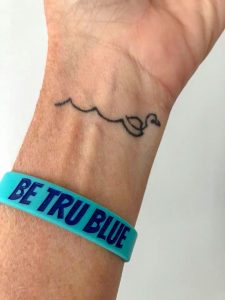 RB has now been in hippotherapy for six years. He recently graduated to adaptive riding and learning how to saddle and brush the horse himself. When he first rode a horse, RB couldn’t speak and was afraid to even get on. Now, he is riding, caring for, and understanding how to ride a horse. RB has had the generous sponsorship of Gerry and Diane Wendel, former Incline Village residents who, through their Lisa Wendel Memorial Foundation, have covered the cost of riding all these years. They have also purchased stickers, socks, and T-shirts for all the kids to celebrate Tru Blue Day.

The One and Only RB
Arts & Culture