Home Sections Mountain Life The Life of a Tahoe Cowgirl 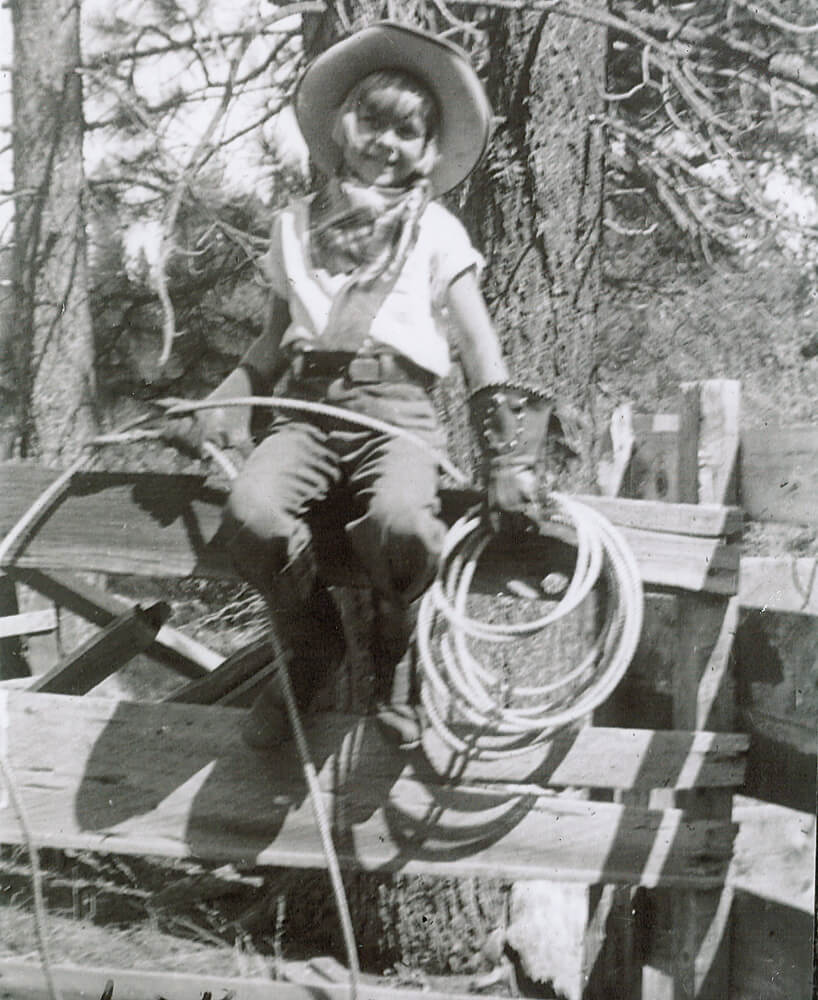 In this column I frequently opine about the good old days at Tahoe in the 1960s and 1970s. But those decades are citified, modern times compared to what Tahoe was like in the ’20s, ’30s, and ’40s. Fortunately, a few people are still alive today to tell stories of those times. One of those is Mazie Carnell, who I’ve known since the 1960s when she was the Tahoe Lake School librarian who used to scare students with her pet snakes and spiders. She was also the choir director at Corpus Christi Church, where she tried to turn a rambunctious group of youngsters into a group of singers at the midnight Christmas mass. But long before that, Mrs. Carnell was a little cowgirl named Mazie Walker who spent her summers in the ’30s and ’40s milking cows and driving horses, all while living in the only house in Squaw Valley.

Mazie was born in Shingle Springs, Calif. in 1927, the fourth of five children in a family of cattle ranchers. Her grandfather, Frank Xaphuis Walker, bought 3,000 acres in Blackwood Canyon before she was born as a place to range cattle during the summer, which became known as the Long Walker X Ranch. Every spring, they would drive the herd from the wintering range in Folsom through the Rubicon Valley, over Barker Pass, and into Blackwood Canyon, where lush grazing and the only house in the canyon awaited them. The Walkers supplied meat and milk to the folks in the relatively bustling nearby metropolis of Meeks Bay. Mazie’s grandmother did not allow alcohol at the cabin, so the men built a bar on the other side of the creek for their drinking endeavors.

At the age of 5, Mazie’s mother, Eva, only 29 years old, died from pneumonia, and the family moved to different pastures in Antone Meadows. The meadows, which can be reached from the Tahoe Cross Country Center on skis or mountain bike, were named after Antone Russi, who came to the area in the 1880s. When he died, his wife married Mazie’s grandfather, who took over the Russi house on Lake Tahoe that was originally owned by Captain Burton, the namesake of Burton Creek and Burton State Park. This house, now long gone, was located near the end of Bristlecone Street, and the property included the high water island just off shore.

Alas, Mazie’s father couldn’t cope with five kids under 12, so after her grandfather died he sold off the properties, with much of the money going to an uncle who raised four of the kids (one was adopted by another relative). Mazie remembers her father as “a great rancher, a great cowboy, a great ladies man, and a great lot of stuff he shouldn’t be.”

When she was older, Mazie spent summers working with Bud Jones, founder of the Squaw Valley Stables, in his cabin in Squaw Valley. Actually, it was the cabin, as it was the valley’s entire housing inventory at the time. Bud, Mazie, and her sister, Pat, milked cows and delivered the milk to Truckee River families, and hauled bucket-loads of fish from Squaw Creek up to Five Lakes so that when Jones packed up customers, there would be plenty of good fishing.

In the spring, the cowboys and cowgirls drove a herd of horses out of Squaw through Tahoe City and up to Antone Meadows. While these trips were successful, Mazie remembers her brother was not so lucky when he drove hogs from Antone to Blackwood on a hot summer day. When they went by Hurricane Bay, he thought those pigs would appreciate the water. Instead, he found out the hard way that pigs can’t swim.

None of this was a life of luxury. The cabin in Squaw had no running water or electricity. They used the nearby creek to supply the house with water by the bucket. There was hard work, but also lots of time to play. Mazie bemoans the lack of freedom to roam that kids have today. Back then, a 10-year-old kid would saddle up his or her horse and ride miles away from home, maybe making it back before dark.

World War II put an end to much of the joys of the summer cowboy life at Tahoe, but when Mazie graduated from high school at the Holy Rosary Academy in Woodland, she hightailed it back to her hometown. She met Dick Carnell at the Conners Gas Station where the Cobblestone East building sits today. Dick had attended Tahoe Lake School, which went all the way through high school at the time. They got married, raised seven kids in Tahoe City (one of which was smart enough to marry my sister), and then eventually moved to Sierraville, a place where riding a horse was still a part of the lifestyle, a place that felt a bit like Tahoe used to feel. When we spoke in May, she reminded me to “tell ’em about the Tahoe cowboys. Nobody tells their stories.”

The Life of a Tahoe Cowgirl
Sports & Outdoors / Wellness