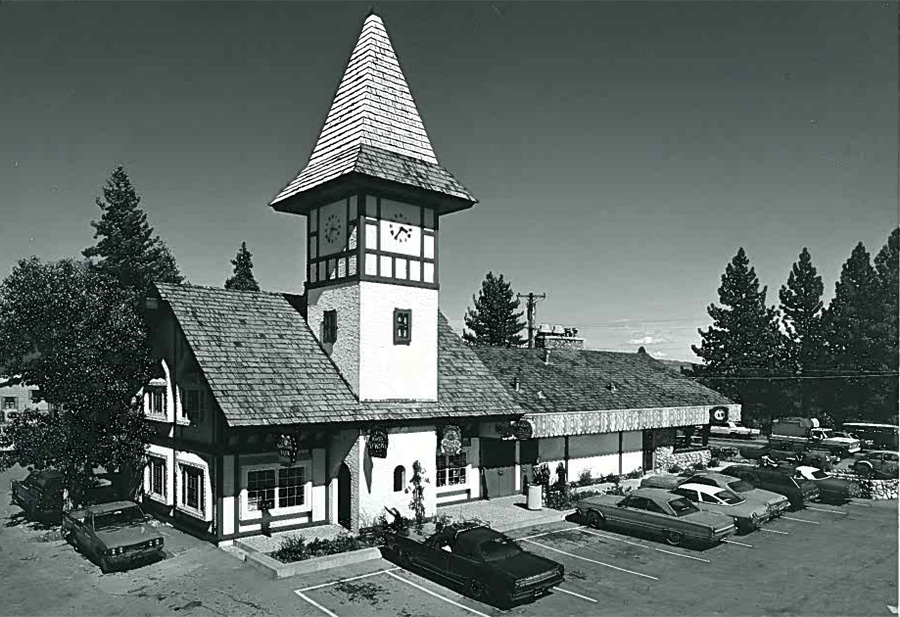 One of my childhood memories is of my dew prints on the grass as I sauntered across the golf course to Miss Bean’s first grade class at Tahoe Lake School. I lived with my four siblings and parents in an ancient house in what is now the back parking lot of the Cobblestone Center in Tahoe City. Like most kids, I was oblivious to what my parents were up to. They were up to a lot. They were working hard to build a dream.

In 1960, my parents, Dan and Joan Hauserman, fresh from watching the Squaw Valley Olympics, decided to call Tahoe home. They built a house in Homewood, and for a few years Dad would fly by seaplane to the Bay Area to work for the family business. But Dad was the last of nine children, and I believe his title with the Cleveland, Ohio–based Hauserman Company (which built movable office partitions) was Low Man on the Totem Pole. After a few years, my parents broke off from the family business and did what a lot of Tahoe people are still doing today — trying to figure out how to make a living here.

Dad’s first Tahoe job was attempting to sell Gravely snowblowers. That didn’t work. Then my parents noticed a For Sale sign on the Lake Chalet Motel in the center of Tahoe City. They had never owned or operated a motel, but they sold their Homewood house and packed the five kids into the 1,200-square foot house that doubled as the motel office. My older sisters were put to work cleaning rooms, and apparently I became the six-year-old bill collector. One time when I was told that guests had arrived late and would pay in the morning, I knocked on their door bright and early and stridently proclaimed, “You know you gotta pay to stay here!” It didn’t take long for my parents to decide motel life was not for them, so they set to work finding something else to do with this prime piece of real estate.

Fortunately, my mom is a world-class shopper, and the total lack of shopping opportunities in Tahoe City gave her an idea. She correctly anticipated that with the recent success of the Squaw Valley Olympics and the completion of Interstate 80, Tahoe was about to change from a sleepy summer resort to a year-round playground, and all those skiers were going to need a place to go shopping. Based on what they saw on a trip to Europe, my parents envisioned for Tahoe City a Bavarian-style shopping center that would become the center of town. When it came time to borrow the money to make that happen, however, they discovered that the local banks didn’t share their excitement. In fact, they thought Tahoe City would stay a sleepy town. But my parents persisted, and finally found that the little First National Bank of Nevada was willing to take a risk on this ambitious couple. (Years later, my dad told me that the three most important relationships in life are with God, your family, and your banker.)

In 1966, while I was playing air guitar to The Monkees in Mrs. Long’s third-grade class, my parents had a busy year. They started Hauserman Real Estate; moved the 12 units of the Lake Chalet Motel and our home to Comstock Acres (the motel became Lake Chalet Apartments, still in operation across the street from Tahoe Tree Company); built a new family home in Dollar Point; and began construction of the Cobblestone’s first building. Oh, and one more tiny detail: In the middle of August my mom delivered her sixth child. No wonder she didn’t appreciate it when I said I didn’t have time to make my bed.

Now in debt up to their eyeballs, they were busy trying to sell as much real estate and borrow enough money to build the rest of the Cobblestone, a process that would take eight years. The second building came in 1967, and the cinema two years later.

In 1972, the clock tower and the A&W restaurant were built, followed the next year by the Tyrol Haus across the back of the property. By the early 1970s, the planning process to get commercial development approved in Tahoe was becoming nearly impossible. Fortunately, my parents were able to successfully work their way through the maze of agencies to obtain a permit for the last building just 10 days before a moratorium on new development was instituted by the California Tahoe Regional Planning Agency.

In high school and over college breaks, while I was watering the flowers and flirting with the girls who worked in the women’s clothing store, my parents were busy trying to keep the buildings full and organizing weddings for my sisters. In the mid ’80s, the restaurant went out of business and my parents decided to add a little more excitement to their lives by opening the Café Cobblestone. I remember coming home from grad school at Christmas and being immediately commandeered to replace the missing dishwasher. My dad, now 88, said what he remembers most about their year in the restaurant business was, “I’d never seen so many dishes in my life.” Once the restaurant was up and running, they gladly turned over the reins to Mike and Sharon Laferriere, who ran Café Cobblestone successfully for 15 years.

When the family was stuffed into the station wagon for a family trip, it used to drive us kids crazy that Mom kept stopping at phone booths to keep real estate deals going. Later, when I owned a business, I understood they were just doing what a lot of small business people do all across America — working their butts off to somehow stay afloat and keep a dream alive.

~ Tim Hauserman, who discovered what a slacker he is while writing this article, wrote the guidebook to the Tahoe Rim Trail, the third edition of which would make an excellent Christmas stocking stuffer. Dan and Joan Hauserman are now 88 and 84 and live in Rancho Mirage, Calif. Comment on this column below.