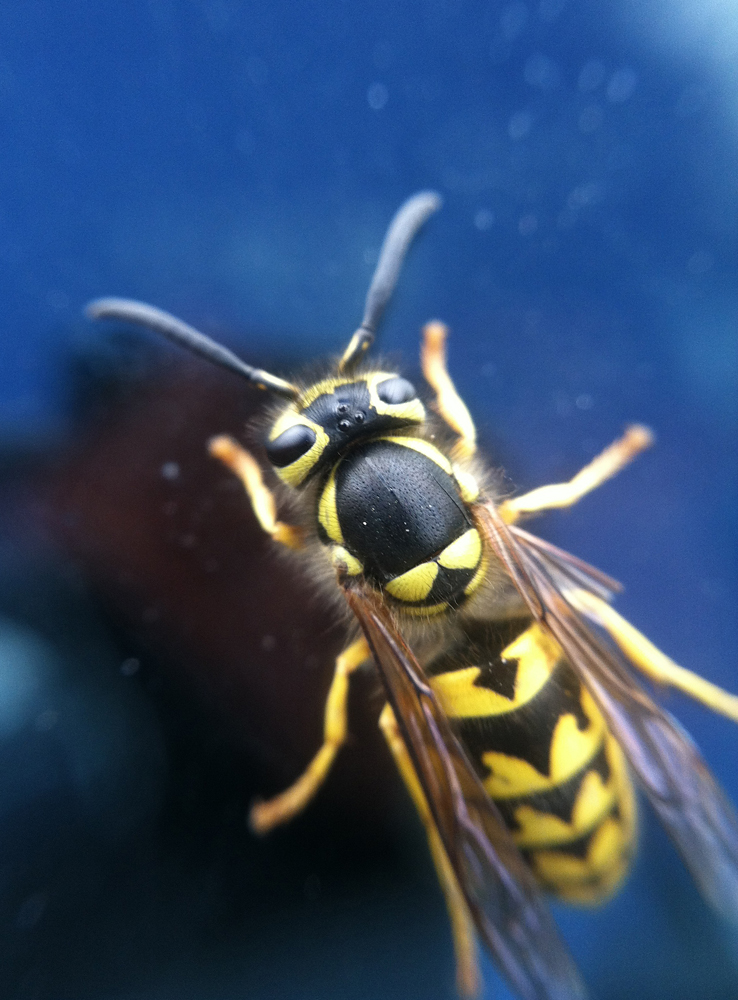 In beginning my research on local bees and the reason for their abundance this summer, I was immediately corrected by two bee experts, or should I call them bee and wasp authorities, on my misnomer. “They are not bees,” they said, “they’re wasps. There are marked differences between the two.”

Wasps (Vespidae family), commonly known as yellow jackets or paper wasps, are yellow or orange and black and shiny. Bumblebees, on the other hand, are black and yellow and fuzzy with a dull coat. Yellow jackets have a narrow, short abdomen while bumblebees are just plain square and chunky. Yellow jackets and paper wasps both build their nests out of plant fibers and saliva, whereas bumblebees use wax and resin.

According to the University of California Agriculture and Natural Resources website, the ground-nesting wasp category includes the western yellow jacket, V. pensylvanica — the most prevalent wasp in our area and what we most mistakenly call a meat bee — and seven other species. Most yellow jackets build underground nests in the spring. The nests last one year, and at the beginning of every winter all the workers and the queen die, while the young females survive to start new colonies the following spring.

Aerial-nesting yellow jackets, D. arenaria and D. maculata, build nests from tree limbs or, less commonly, under building eaves. They are extremely defensive of their nests and food (paper wasps less so) and can sting multiple times. Bumblebees, by contrast, can sting but rarely do.

True paper wasps, such as Polistes fuscatus aurifer, P. apachus, and P. dominula, are one inch long with longer legs and a slimmer waist than yellow jackets, and are most commonly found in urban and agricultural settings. They hang their open-faced paper nests in protected areas, such as under eaves and tile roofing or on tree trunks and branches.

Wasps are carnivorous and eat caterpillars, carrion, human food, and garbage, anything with protein to feed their larvae — hence the mistaken name of meat bees. If you see a wasp feeding on a flower, the nectar’s only purpose is to feed the wasp itself, not its larvae. Bees, on the other hand, are strictly pollen and nectar feeders, obtaining protein from the pollen.

Now, to answer the question that provoked the subject of this Nature’s Corner: Why was it such a big wasp year? Both experts I talked to attributed the summer and fall outbreaks to drought. Lynn Kimsey, professor of entomology and director of the R.M. Bohart Museum of Entomology on the UC Davis campus, said that with a mild winter and spring, there are more survivors in a drought year as opposed to a harsh winter when a lot of young female wasps die before spring. Randy Oliver, an entomologist and renowned beekeeper in the foothills, said of the busy wasp season: “A dry winter and spring makes it easier for wasps to build their nests underground since there isn’t much snow. Plus, since wasps are carnivorous, a good early season of plant and insects provides abundant food for them.”

As for wasps being a harbinger of a big winter, Kimsey states: “No, nothing to do with the future. Rather, they are the result of past weather events.”

Which discounts the myth that a summer full of wasps is a sign of heavy snowfall to come. We just have to sit and wait for Mother Nature to reveal her plans.

The Buzz About ‘Meat Bees’
Community

The Buzz About ‘Meat Bees’
Sports & Outdoors
All Day