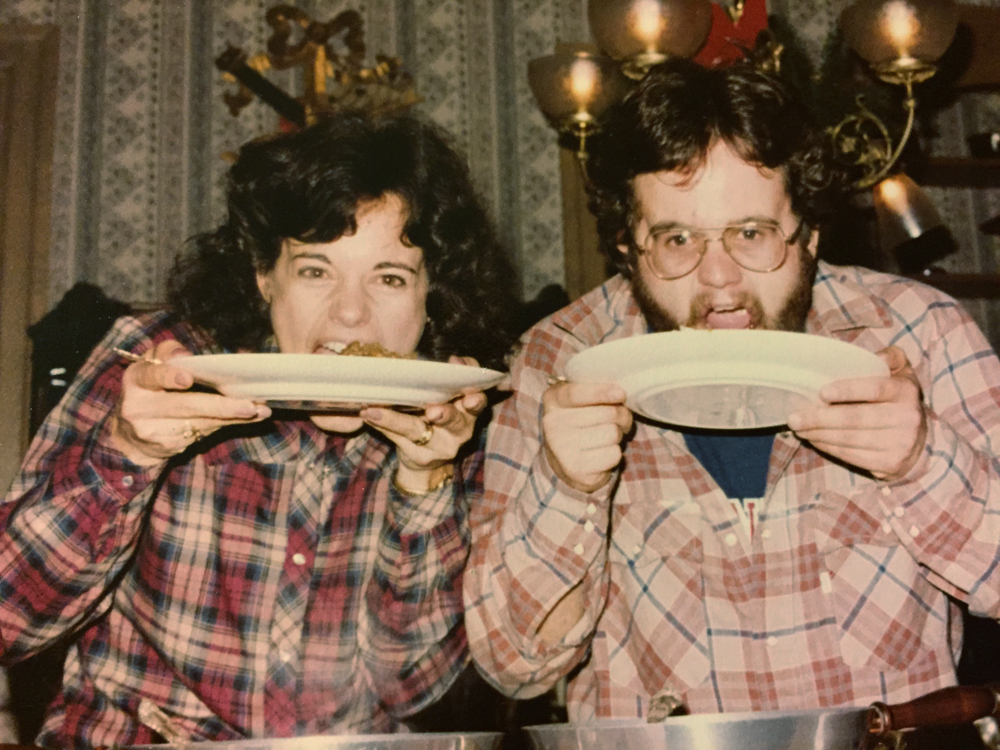 When we are graced with a fire softly crackling in the fireplace, and a fresh coat of snow on the ground, there is no place more wonderful than Tahoe at Christmas. Back in the 1960s and ’70s, Christmas was just as beautiful, but less commercial and all about tradition. It also had an uncanny resemblance to the movie A Christmas Story.

Fortunately, in Tahoe City we didn’t have a mall with a mean Santa Claus saying “Ho, Ho, Ho” in monotone before kicking Ralphie down the slide. We had something much better: The Big Tree in the center of town. It was the highlight of the community Christmas when all the little children of our world would congregate under the tree festooned with Christmas lights to receive a gift from Santa on his sleigh. Afterwards, we would retire to Conger’s Restaurant next door for hot chocolate and pie.

Mostly, however, Christmas back then was more about family than community. The times I remember best were when I was reaching my teenage years and my older sisters started popping out babies on a regular basis. This created a bumper crop of nieces and nephews, and led Grandma to shop till she dropped and invite the whole gaggle of grandkids to the family abode in Dollar Point.

After stuffing faces, listening to endless Christmas music, and getting to open one present each, the youngest kids would be forced into bed on Christmas Eve with the threat that Santa would not come if they didn’t promptly go to sleep. Then, once everyone was fast asleep, the grandkids would be rousted from bed to catch Santa in the act of placing presents under the tree (Santa had a voice very similar to Mike LaFerriere, who owned Conger’s Restaurant, and later Cafe Cobblestone. He was busy making the rounds all over town). Santa would then give all the children hugs and instruct them not to be buttheads to their cousins and were marched right back to bed with more threats that if they didn’t go to sleep right away the presents would disappear.

Later, those of us who were old enough to not cry in church went to join the packed house at Corpus Christi Catholic Church for midnight mass. Some of the churchgoers looked exhausted and ready to go to sleep. Others appeared as if they had spent Christmas Eve locating large quantities of liquid Christmas cheer.

We all oohed and ahhed as the well-organized, beautiful, but somewhat musically challenged, choir of kids walked down the aisle singing. Many members of the choir were my friends, who gingerly carried candles while trying really hard not to look at me, knowing as soon as they did, we would burst into laughter.

In the morning, groggy-eyed but excited, we were roused by the youngest of the kids and tromped downstairs to an immense pile of presents surrounding the tree. Within short order any semblance of decorum was dispatched and paper and boxes were flying everywhere as the kids screamed with glee.

Amongst the mass hysteria, Dad was finally in his element. He’d been Mr. Bah Humbug for the previous three weeks, while Mom insisted on working her tail off decorating the place like a Christmas store. Now, he could relax and make us all happy by mixing up a steady supply of Ramos fizzes, a gin and ice cream concoction that was tasty and lethal. There is nothing like a bit of gin at 7 a.m. to take the rough edges off the morning for a 12-year-old. Parents back then were a little less paranoid about a morning picker-upper for an underage kid on a special occasion. I’m sure Dad was attempting to forget that the bill for all that largesse under the tree would soon come due.

After the presents had been suitably dispatched, there was the traditional neighborhood football game on the street with whomever we could conjure up to play. The game was technically touch football, although you were allowed to tackle the opponent into the snow banks on the edge of the street. We worked up a hearty appetite and a few bloody body parts for the next round of massive consumption, which always involved turkey, cranberry, mashed potatoes, gravy, peas, and, while Grandpa was still alive, some amazing pumpkin pie.

I remember one Christmas we were snowed in for three days under several feet of snow. I felt like there were 643 people in the house. There was a passel of howling kids, assorted outlaws wondering when they were going to be able to leave, and a constant barrage of cooking, cleaning, and mom’s favorite: organizing. But then, finally, Mom couldn’t take it anymore. We found her spinning around in circles in the middle of the snowy street screaming and pleading for the plows to arrive so all these people would get the hell out of here. Then she dusted off the snow, came back in the house, and the festivities continued.

When I look back at my childhood Christmases, what strikes me now is that although there was always an enormous pile of presents under the tree, I can’t remember anything I received or gave. It wasn’t about accumulating possessions; it was about being together. It was a phenomenal time we thought would go on forever, but alas only lasted a few years. My parents got older and moved to warmer climates, and the six kids all started their own unique, but much more intimate, Christmas traditions. But, for a few crazy years, we created some amazing memories that still make me smile. A grown up Ralphie would certainly say that’s what Christmas is all about.

In a blender mix 2 oz gin, one scoop vanilla ice cream, lemon juice to taste, and an egg white.