Home Columns Kids Connect The Sun Rises for Everyone 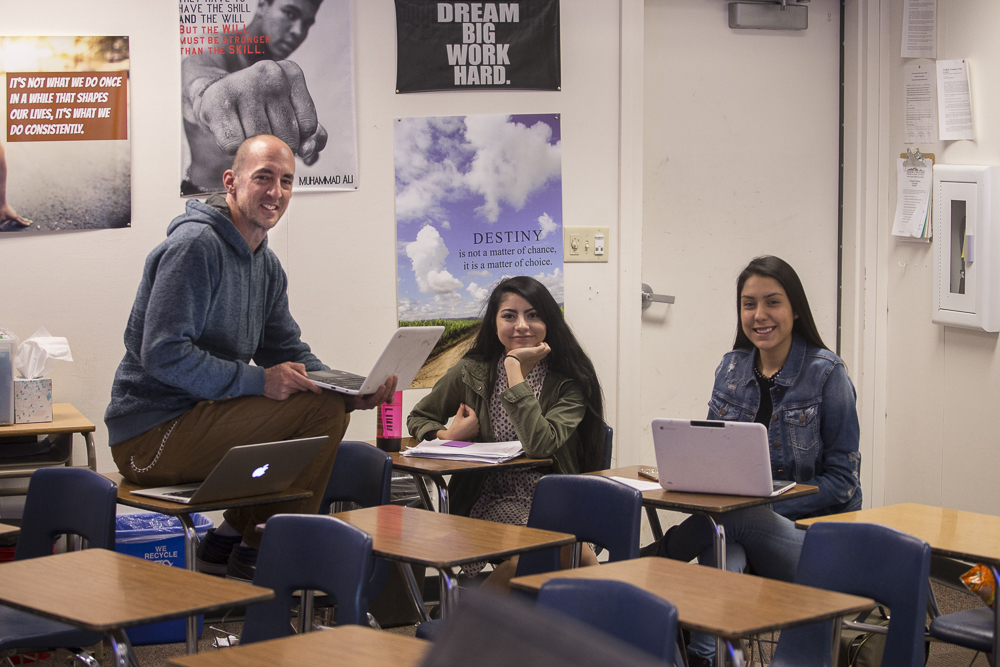 The stress of junior year is so ubiquitous it’s become cliché, and the initialisms are endless: ACT, SAT, AP, GPA. The college application process exposes us to vulnerability, judgment, and more than a year of challenges. I started my process with good luck. I am an upper middle class white girl with a legacy of college graduates that extends back to my great-grandfather. I attend a private school that provides me with a college counselor who knows my name and those of my other 11 classmates.

Along my fairly myopic path toward college acceptance I was introduced to Craig Rowe, an English teacher at Truckee High School, who works with a group of impressive girls whose college path runs parallel to my own and whose experiences I’d like to share.

When Rowe began teaching at Truckee High two years ago, he noticed an imbalance in the demographics of students in AP and honors classes. It upset him that there were mostly white kids, and only a few Latinos. Noticing more cases of bright Latino students taking classes that were below their abilities, Rowe started a group called La Fuerza Latina (LFL) in 2015. LFL is an unofficial club composed of Latina girls who have good grades, good work ethics, and are full of potential, but who have limited resources available to them.

Although LFL is a privilege, it isn’t glamorous. Rowe believes in the grind. He asks the girls not to focus so much on dreams, but instead the things that get them there: scheduling times to take and retake the SAT/ACT, signing up for AP and Sierra College courses, planning and hosting LFL-sponsored civic engagement events like meeting the Truckee mayor, and discussing the lack of housing in the Latino community. He asks them to take an intensive personal essay workshop, apply for early decision via Questbridge, and role-play college admissions interviews. Rowe believes that getting to class or work on time and following through is “a habit for success.”

From what I see, though, there is more to LFL than logistics and grind. There is something long-lasting about what Rowe is doing. Because of him, these girls are learning to believe in themselves and feel empowered. As the LFL motto reads, “When the sun rises, it rises for everyone.”

Junior Leslie Caratachea said, “Before joining LFL, I would limit myself because I felt that due to my ethnicity I would not make it very far; nevertheless, I learned my Latina background should not be a reason to hold myself back, but it should be embraced.”

LFL member Vanessa Mora-Garcilazo, a senior whose parents didn’t finish middle school, says, “If it wasn’t for LFL, I would’ve been lost and would’ve probably not have applied to colleges.”

Rowe tells the girls they don’t have to commit to the program, he just wants them to commit to themselves. “I ask them to invest in themselves and I challenge them to raise their expectations academically, personally, and professionally,” Rowe said. Two years ago, his first LFL girls were accepted to 15 of the 18 colleges they each applied to, including Berkeley, UCLA, Cal Poly, and Pepperdine. LFL member Mitzi Ayala was just accepted into the Yale Summer Global Scholars Program, one of the most competitive precollege courses.

Rowe is the perfect person to guide these girls, but not for the reasons you’d expect. Yes, his résumé is more than impressive. He graduated with honors from University of Washington, received his Masters from UC Santa Barbara in dramatic literature, won a Regents Fellowship as part of his Ph.D. funding at UC Berkeley in the department of performance studies, and he worked in a Chicana writing program at Stanford. Rowe’s academic success implies that he worked hard though his own junior year and it paid off. But the story of his younger life will surprise you and reveal why he is so dedicated to the young LFL women.

Rowe grew up in Hayward with a white dad and a Mexican mom, neither of whom attended college. He graduated from high school with a 1.87 GPA and was later kicked out of community college. After drifting for six or seven years, he met someone who changed his life. He was attending community college in Seattle, working as an English learner tutor, thinking it would be the easiest community service credit. His first client was a middle-aged Vietnamese woman. She needed help translating letters from janitorial jobs she’d applied to. “As I read each one, this woman’s face went from anticipation and hope, to soft tears, to hardened despair,” Rowe says.

After translating a pile of rejections, he decided to meet with her every day for the next month. During that time they prepared her for a second round of applications — grinding through steps like rewriting her résumé and cover letter, and searching help-wanted ads. She was overwhelmed with relief when she was hired as a housekeeper by the Grand Hyatt Seattle. From then on, Rowe knew he had to teach. “That experience gave me focus and purpose; it illustrated for me in the most real terms possible the opportunities education can bring.”

The college application process is like anything else in life; you can make it about yourself, or you can look for ways to make your path intersect with others. Rowe built on his own experiences to connect to the young women of LFL. By taking the things that happen to us, either by chance or hard work, and using them to find ways to intersect with others, life becomes rich and fulfilling … and this is what creates positive change in the world and even in our own small town of Truckee.

The Sun Rises for Everyone
Arts & Culture
12:00 am

The Sun Rises for Everyone
Arts & Culture