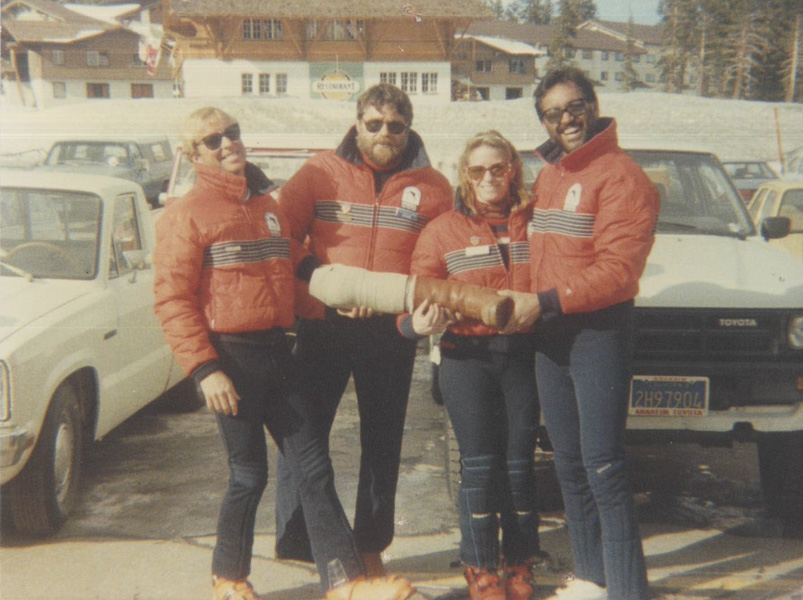 Achieve Tahoe, formerly Disabled Sports USA Far West, was founded 50 years ago by the late Jim Winthers, a World War II veteran of the Tenth Mountain Division and director of the Soda Springs Ski School. To recruit participants, Winthers and other vets would walk around Letterman Army Hospital in San Francisco talking to wounded Vietnam soldiers, mainly amputees, about coming up to Tahoe to ski.

Doug Pringle, who would later become one of the founding members of the organization, was apprehensive the first time he saw the WWII guys walk through his ward at Letterman. A West Point graduate who lost a leg in Vietnam, Pringle had skied only once before his injury. He described his time skiing with two legs as falling down the entire mountain, and he thought the WWII guys were crazy to talk about skiing on only one leg.

Declining the first offer to go to Tahoe, Pringle quickly changed his mind after his fellow hospital mates returned after a weekend of skiing saying they not only made turns, but also hung out at the bar with a bunch of beautiful women.

Pringle made his way to Tahoe the next weekend.

“It changed my life,” he said. “Because it was the first thing I did after losing my leg and it became my life’s work.”

Today there are more than 120 Disabled Sports USA chapters nationwide, all of which stem from this original Tahoe chapter. Disabled Sports Far West changed its name to Achieve Tahoe in 2015 to avoid confusion with the national organization.

As seen with Pringle, veteran involvement was the impetus to spread the program across the nation. He explained that veterans would participate in the program while recovering at Letterman in San Francisco or the Naval Hospital in Oakland. Then, they would return to their homes all across the county and start their own programs.

“We developed a cookbook approach where we’d train volunteers and then teach them how to start a chapter at their home mountain,” Pringle said.

The organization’s founders would send anyone who wanted to develop a program an informational pamphlet, or “cookbook,” as they referred to it. Then, a few weeks later, they’d travel to the mountain to drop off equipment, train the instructors, and guide volunteers through the process of making their own adaptive ski organization.

Pringle said the early days were especially hard because of society’s harsh judgment toward amputees. He explained that ski mountains were apprehensive to allow adaptive skiers on their slopes. “My approach was always education, rather than walking around with a picket sign.” Pringle said.

Disabled Sports not only changed the ski industry’s perception of adaptive skiers, but they truly made society more accepting people with disabilities.

Pringle and his crew’s approach worked because they were eventually responsible for creating the country’s first adaptive certification program, but not without much effort. At first, the Professional Ski Instructors Association (PSIA) was not interested in developing a certification process for adaptive skiers, so they went ahead and did it themselves.

The program was fully integrated to PSIA in 1992.

“It was a major accomplishment for us,” Pringle said. “Today there are people in wheelchairs who are fully certified instructors, they can teach anyone, with any disability, how to ski.”

While 50 years have passed since the first adaptive lesson was taught at Donner Ski Ranch, the passion from the employees and volunteers has only grown since the program’s inception.

In 1991 the first ever structure built specifically for an adaptive ski program in the United States was built at Alpine Meadows. Today they organize roughly 1,900 lessons a year out of the same building for Alpine Meadows, Squaw Valley, and Northstar California.

“Even though disability is what brought them here, it isn’t what we focus on,” Haakon Lang-Ree, executive director, said. And it is likely this thinking that has made the organization viable for the long term. They don’t turn anyone away and have a high retention rate, with an end goal of making the skiers who come through their door independent skiers.

“People with disabilities are motivated by the same things that would appeal to anyone,” Lang-Ree said. “Everyone is looking to feel the stoke of skiing/riding. We’ve found that the impact of someone’s achievement in skiing leads to success in other aspects of life.”

Feel Good Friday: 100 percent of proceeds from $5/beer and featured Titos cocktails at at The Dubliner of Fridays goes to Achieve from 2 p.m. to closing

Stronger Than Ever
Music