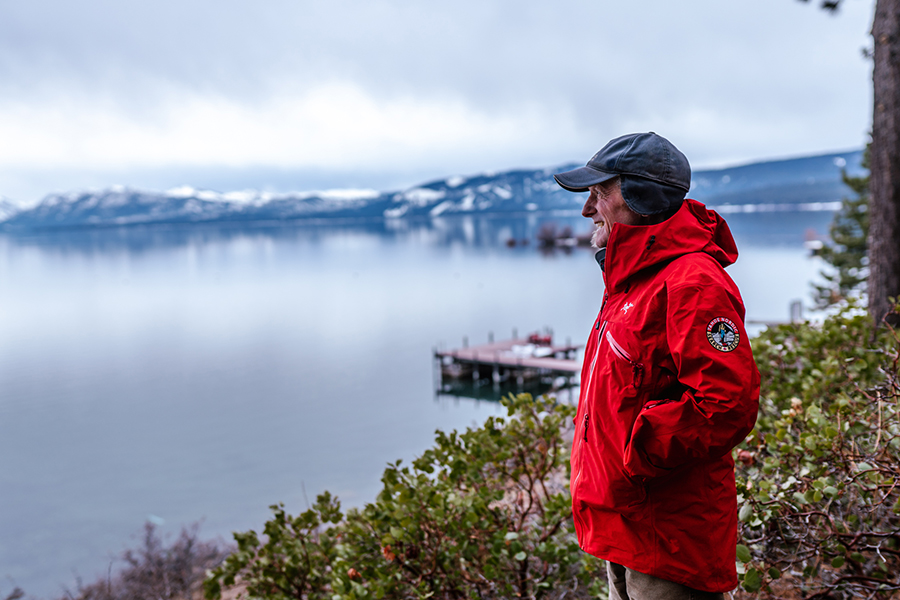 It is Jan. 7, and the first monthly meeting of this year for the Tahoe Nordic Search and Rescue Team. My husband, Doug Read, and I slide into folding chairs in the back of a small conference room at Granlibakken Tahoe resort. Around the room, I see couples who’ve met and married through the team. I also see young adults who first attended meetings as little kids, veteran skiers now in their 70s and 80s, and new millennials just joining. All of them are volunteer skiers, ‘boarders, or snowmobile riders who rescue lost people in the Tahoe/Truckee backcountry.

We can’t mingle as usual with them because Doug’s immune system is so weak that any contagion from cold or flu will send him to the emergency room. In his bulky HEPA filter mask, he is “Doug Vader” — or “Darth Doug.” 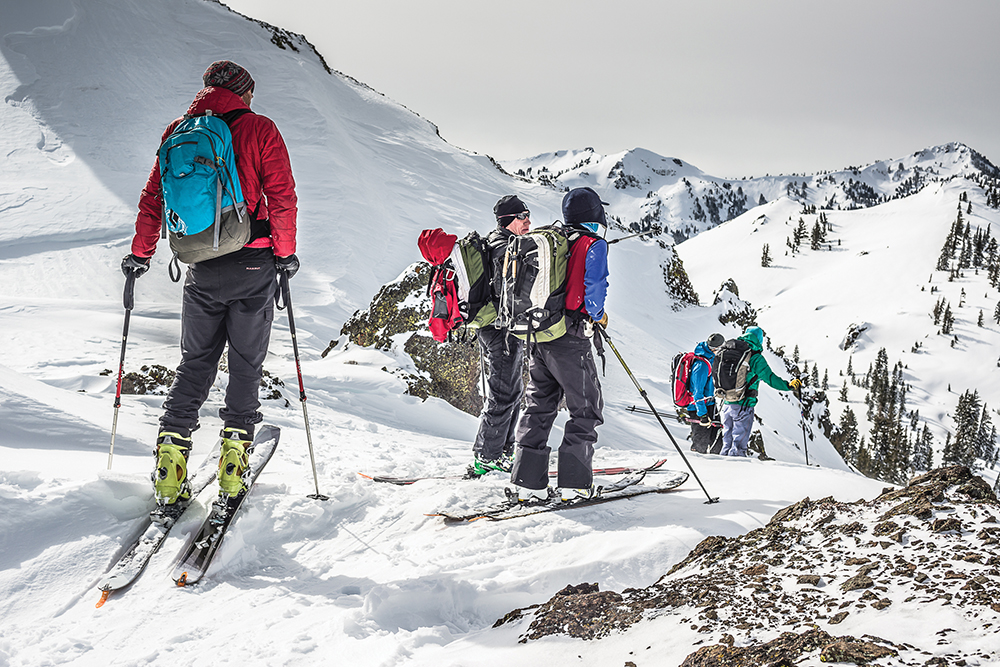 Doug doesn’t know that some team members have asked me to get him here tonight, his health allowing. As I scan the crowd we know so well — some 60 people wrapped in puffy jackets and warm hats — I feel echoes of the last time we were here. It was May at the final meeting of the 2018 winter season. Doug and I were sitting similarly in the back of the room, a beer cradled in my knees, when he tapped my arm and said, “I’m going to say something.”

Doug is 5-foot-5-ish tall, and typically when he stands at a TNSAR meeting to make an announcement, someone quips, “Stand up!” Affectionate jokes can zing around easily at these gatherings — among lanky granola-eating skiers and motor-head sled riders, between guys with buzz cuts and guys with beards, between people who like rules and those who don’t. Doug himself is partly responsible for the comedy: As the team’s first president in the 1970s, he made humor a centerpiece of the group’s culture. As a result, laughter can burst over the room at any second. Pinned to empathy and shared experience, the chuckling is one reason people love the meetings.

That cool May night last year, Doug weaved through chairs to reach the front of the room. “Stand up!” people called. When he spoke, it was from the heart. The following month, he told them, he would begin a stem cell transplantation in which his entire blood system would be wiped out and replaced with blood cells donated by a stranger. The four-month procedure would be risky and, for someone of his age, which was 70 then, experimental. There was a 40 percent chance he wouldn’t come home.

He wanted the team to know how important they’d been to him. How they’d helped form him as a man deeply enmeshed in community; how they’d been his rock-solid foundation; how their friendships and the memories they’d made together would sustain him. When he was done, silence seized in the room.

A month after that announcement, at Stanford Medical Center, Doug sat wrapped in blankets as new stem cells flowed into his chest through a surgically implanted port. With a birthday cake and a song, we celebrated his new beginnings. After that, we had a waiting game: The new blood cells needed to adapt to his body and his body needed to accept them.

We were lucky. Five weeks later, doctors released Doug to spend the next 70 days recovering in some friends’ home that was near enough to the hospital that he could be rushed in if something went wrong. Robust as he is (oh-so-Tahoe), he healed like a front-runner in the team’s annual (and upcoming) March fundraising event, the 30K Great Ski Race from Tahoe City to Truckee. He looked forward to an early release home. But that didn’t come.

Instead, in August the feared immune system battle erupted. A common fungus attached itself to a bruise on his shin and started to grow — an inky stain of flaky stuff. Worried it would spread to his organs and brain, doctors cut into his leg twice to quickly excise the fungus, and went in a third time to close the fist-sized wound that remained. They ordered Doug to sit in a wheelchair, his leg slung up in a stirrup to prevent the rupture of new tissues.

When this static recovery in the wheelchair went on for two months, his body mass shrank, and so did our sense of hope. We wondered if he’d ever get back to our North Tahoe community. But his strength prevailed. On Dec. 9, we arrived at our house together for the first time in six months. Doug stepped out of the car and onto the snow-frozen earth of Tahoe. We were finally home.

So, this evening of Jan. 7 on which we quietly observe the crowd from the back of the room, he is making his first return to TNSAR.

As the familiar meeting opens, board president Devon Heimstra calls on longtime member and Placer County Sheriff’s Sgt. Sage Bourassa to read a proclamation from the California Office of Emergency Services. She begins, “There is no one more important to the dynamics and success of the Tahoe Nordic Search and Rescue Team than Doug Read …”

The praise that follows is an astonishing list of accomplishments amassed throughout Doug’s 49 years at Lake Tahoe: As Great Ski Race director, he raised over a half-million dollars for the team; through a program called Hug-A-Tree, he has taught more than 3,000 students how to stay safe in the mountains; On the 150-plus backcountry searches he has joined, he has saved at least 300 lives. Her speech ends with the part that might mean the most to me — the unquenchable drive and spirit unique to this man.

“Doug’s physical strength, endurance, great sense of humor, knowledge of the local terrain, skiing ability, and mental fortitude make him the most valuable member of the team,” Bourassa says. “There is no one we would rather have watching over our backs or leading the way when the going gets tough.”

When she summons Doug to the front of the room, something happens that I’ve never seen before, ever: He is tongue-tied.

From day one of our devastating prognosis, our life was a tornado of fear. Doug dreaded death; I dreaded life without Doug. I knew that if Doug were to survive this, we both would need much more than doctors’ checkups. We needed our town. We needed our team. I didn’t know then that the Tahoe Nordic Search and Rescue Team would be such a core of our safety net.

Tonight, as Doug shifts self-consciously on his feet, it’s a silence that doesn’t last. Someone hoots, “Stand up!”