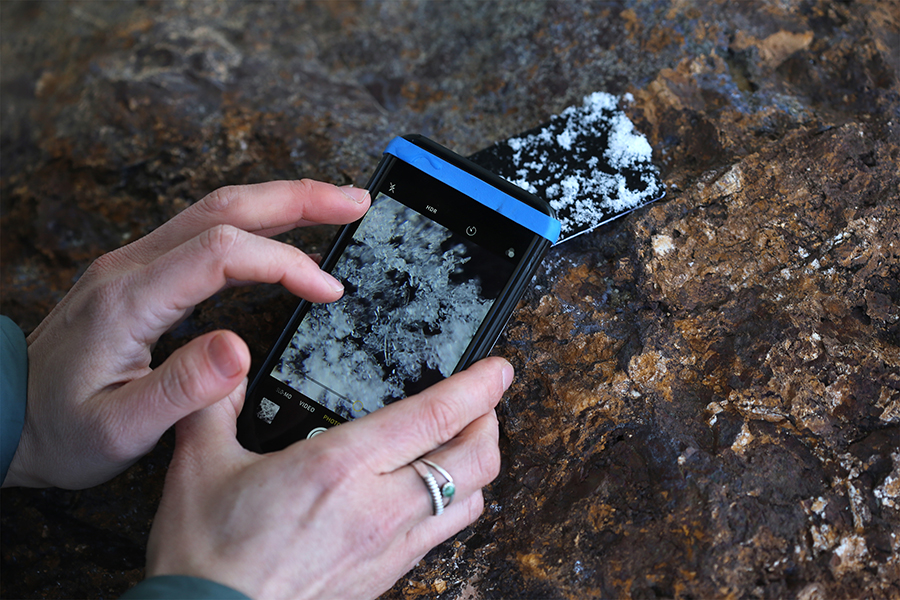 Winter in Tahoe means one thing — SNOW! And if the snow gods are smiling, lots of it! Each and every one of those flakes that dance down from the sky tells a unique story, and the Desert Research Institute (DRI) is seeking the help of snow lovers to learn what those stories are.

“Stories in the Snow involves taking pictures of snow crystals for science,” researcher Meghan Collins explained. “People in the community and students are the eyes and the ears for scientists in this project.”

What this means, essentially, is that the Reno-based research organization wants you to get outside and play in the snow. In the greater Lake Tahoe area, this is a relatively small request. Snow sport enthusiasts are known to be unofficial meteorologists, ever studying winter weather patterns and dissecting the NOAA forecast discussion, waiting for those flakes to fall.

The overall question scientists are trying to answer, Collins said, is: Can we better predict where moisture will fall and when in our region by looking at snow crystals?

“The goal on the education side,” she furthered, “is to inspire more curiosity and care for the world around us, specifically our place and the water that we have available.”

Now in its fourth year, the Stories in the Snow program has doubled annually since its inception. While participants are typically requested to give a $25 donation to the environmental research nonprofit — providing one kit for the donor as well as one kit for a classroom — this season, the Tahoe Fund has stepped in with a grant that will offer 1,500 snow lovers the chance to obtain one for free. DRI representatives, including Collins, will be making the rounds at various ski resorts throughout the winter, explaining the project and distributing the kits to lucky snow lovers.

While the prospect of being part of a scientific study might seem intimidating, the program is rather simple, and smart phone technology makes it easier than ever to be part of this exciting project. The first step to getting involved is downloading the Citizen Science Tahoe app, launched by University of California, Davis’s Tahoe Environmental Research Center. Each kit contains a macro lens and a black felt snow crystal capture card. Don’t be fooled by the seemingly rudimentary macro lens — it’s a dime-sized lens attached to a rubber band that slides onto your smartphone or small tablet.

“There are a couple of reasons why this is nice,” explained Collins. First, it makes it easier for teachers with 30 little hands trying to prep their devices. And if citizen scientists are out adventuring or playing in the the snow, they won’t have to worry about the lens falling off and into the white powder abyss as their device goes in and out of their pockets.

The snow crystal capture card is also perfectly pocket-sized. The most important note with respect to the card is to place it outside on a surface and let it acclimate to the temperature because as soon as flakes fall onto a surface, they begin to melt. The key component to this project is that the pictures have to be of fresh flakes as they fall from the sky.

To the naked eye, the ability to see the minute details of snowflakes is just not feasible. Enter: macro photography. The tiny lens magnifies the flakes to five times their actual size, allowing for the citizen scientist to snap a shot using a smart phone or tablet and upload it to the DRI database via the app.

“That’s what’s cool about this project,” Collins said. “It’s interesting for any level of learner or nature enthusiast. You don’t have to be a scientist, but we’re using it for really cool things.”

Conditions of temperature and humidity impact what general shapes or trends of snow crystals we see. Very moist warm storms that come off the ocean will tend to drop different shapes than colder, drier storms, for example.

“In the cloud, the ingredients needed to form snow are water — so, molecules, droplets, or vapor — and a seed, or what scientists call an ice nucleus,” Collins said. “And that could be soot pollen, volcanic ash, a whole range of tiny little things that water gloms onto.”

Low-humidity crystals are much more simple and basic, she explained. They are more hexagonal in shape. A wetter storm, however, whether it be a cold wet storm or a warm wet storm, tends to result in more complex crystals.

“Most people, when they think of snow crystals, they think of stellar dendrites — the six-sided branching crystals. [There are] so many more varieties,” Collins said. “Don’t just send us the classic six-arm snowflake, we want to see everything. The key thing is that [the photograph] is in focus.”

And citizen scientists aren’t limited to using the DRI-offered macro lens. Novice and professional photographers alike are invited to submit snowflake images shot through their own macro lenses. In place of the snow crystal capture card, participants can use any dark-colored background, with the most important factor again being that the flakes are freshly fallen. Ideally, if a citizen scientist was going to be outside in a storm for say three hours, the researchers would love for that person to submit a photo every half hour, as storms can change throughout their duration.

Collins is currently working with two other researchers to launch a separate citizen science program. Tahoe Rain or Snow, another app-driven project, will help determine the exact location of the rain/snow line.

“Tell us if it’s raining, snowing, or if it’s mixed, if it’s in between,” she said, explaining that NASA has a hard time modeling how much water is falling from the sky at the freezing point. “If you’re driving [to Tahoe] from Auburn and it’s raining and changes to snow, we want to know where that happens.”

In the meantime, the new Tahoe Citizen Science app is available for download on the Apple App Store, on Google Play, and can be found at citizensciencetahoe.org.

Main Image Caption: EXTREME CLOSE-UP: The macro lens contained in the Stories in the Snow kit is easy to use and attaches right to your mobile device. It magnifies snowflakes to five times their original size. Photo courtesy Desert Research Institute

Stories In The Snow
Wellness

Stories In The Snow
Education

Stories In The Snow

Stories In The Snow
Community