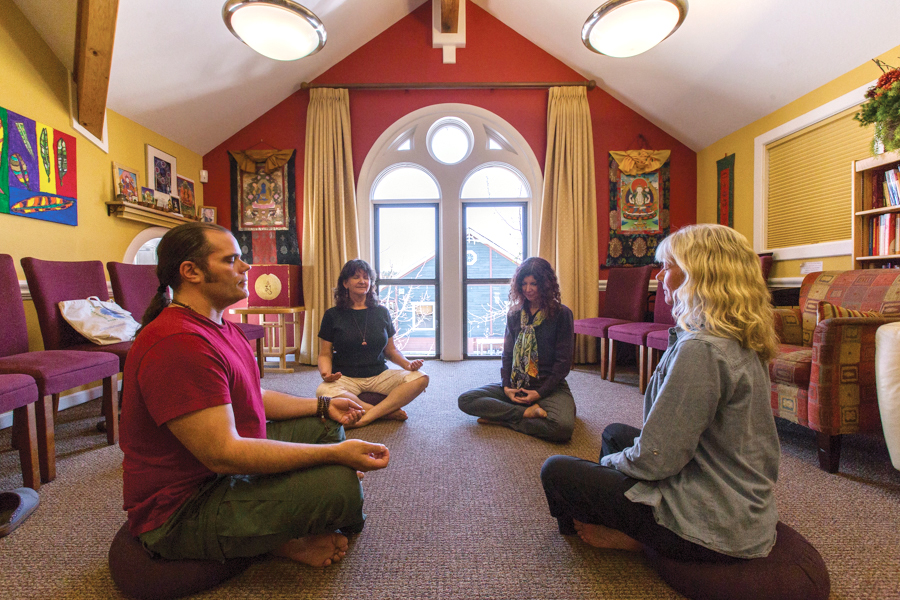 Clare Novak, an interspiritual minister from Carnelian Bay and For Goodness Sake supporter may have said it best: “Many people are drawn to the Sierra Nevada mountains by longing — whether this force is named or known. However they are drawn, with whatever intention, this place quickens their souls with wonder. It has a holy energy for seekers with spiritual curiosity, who are open to a mountaintop experience.”

While Truckee/Tahoe isn’t necessarily known for having a devout religious community, the beauty of the region draws residents who value that je ne sais quoi of the area’s beauty and subsequent spirituality. Hence the need for a nondenominational space for spirituality.

The story behind how the center came to be is unique and quickly evolving. Fourteen years ago, Dave and Margie Griswold, Christian Scientists who were successful in business, made the decision to endow a non-denominational spirituality center right on the south side of downtown Truckee by the railroad tracks. The generous couple shared the same sentiment as Novak and believed that there were people in Truckee looking for something, not necessarily a church, but a space that was beyond the material and offered a solution to spiritual study. Since its inception, the center has offered special programs, workshops, and classes for people of all ages.

The Griswolds, who are in their 90s, recently decided their time funding the center had come to an end and that they would relinquish control back to the community. This decision forced Andy Hill, FGS director, to reevaluate the center’s worth and reconsider the building’s expensive lease and free class structure. As a result, more than 25 community members sent letters opening up about the impact FGS has had on their lives.

“It’s impossible to calculate the amount of goodness that FGS has generated over the last 11 years,” Joe Smith, an avid participant in FGS events, said. “It has raised the consciousness and deeply affected every spiritual aspect within our community. It doesn’t promote religion and yet it provided a forum with resources for anyone interested in learning more about their own spiritual nature.”

This is just one of many similar sentiments where community members express the important role the center has played on their lives. Everything from suicidal thoughts to postpartum depression is cited in these letters of support.

In addition to the personal emails FGS conducted an online survey asking participants if they felt the center was worth saving and if they would still attend programs if they came at a cost or annual donation. The answer was a resounding yes.

“People who use For Goodness Sake are willing to pay for it,” Hill said. And so, the nonprofit is persevering though their change in funding.

The show must go on and Hill and his steering committee are making that happen. They are enforcing a sliding scale donation for each class, meditation, or group meeting of $5 to $20 per person, and a monthly pass of $50 will allow you to attend unlimited classes. However, all are welcome at FGS, and they say no one will ever be turned away.