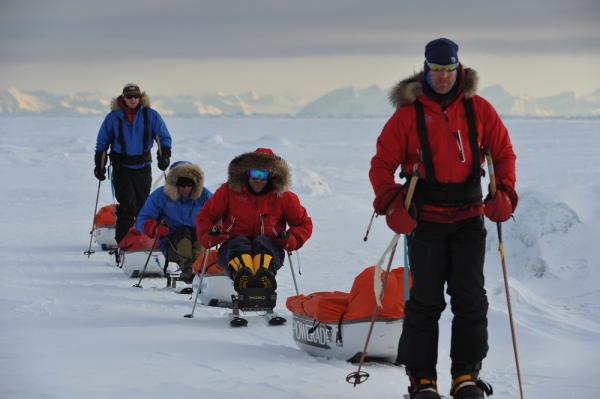 Covered by over five million square miles of solid ice, Antarctica is the coldest place on earth. Temperatures have dipped to -128 degrees Fahrenheit, and winds can be so strong that they can freeze exposed skin in seconds. In the interior, where no animals live, there is no color but white. Because of the extreme cold and lack of air density at the South Pole, its 9,000-foot elevation feels more like 12,000 feet, making even the simple task of breathing more difficult.

So what would attract anyone to such an inhospitable place? For answers, you need look no farther than Truckee, which is home to several groups of people who have not only pioneered travel in Antarctica and to the South Pole, but also work to send people there on a regular basis. With the 100th anniversary of one of the first expeditions to the South Pole this month, we take a closer look at what drives locals to travel to this most unforgiving and hostile of climates.

Anne Kershaw’s life has been devoted to Antarctica since her husband was killed there in a plane accident in 1990. After his death, she led the company he founded, Adventure Network International, the world’s first commercial airline to Antarctica and the only land-based company on the continent, for 14 years. In 2006, Kershaw was asked by renowned British polar explorer Robert Swan to help with his organization, 2041. Named after the year when the international treaty protecting Antarctica is up for review, 2041 seeks to defend Antarctica and reduce global warming through education and by bringing corporate leaders, environmentalists, entrepreneurs, teachers, and young people to the frozen continent. Kershaw is now the CEO of 2041 and of Truckee-based Juniper Business Services, a logistics and administrative company she started to support Swan’s work.

Kershaw, 51, who first went to Antarctica at age 30, has been there 43 times. She is drawn to the continent not only because her husband is buried there but also because of its unique beauty and austere grandeur.

‘It definitely has a spiritual side to it, where you find nature at its finest,’ said Kershaw, who is originally from Britain. ‘In Antarctica, there is a raw sense that this is it, and nature calls the shots — if you are not prepared, you will die.’
Kershaw believes that the allure of the South Pole is its status as the world’s final frontier.

‘It’s the last wilderness,’ she said. ‘In a world where we lack heroes, we look to the heroes of the past.’

The heroes Kershaw is talking about are explorers Robert Falcon Scott of Britain and Norwegian Roald Amundsen. Both set out at the end of 1911 to be the first to reach the South Pole. Scott’s team arrived on Jan. 17, 1912, only to find that Amundsen and his men had preceded them by over a month. Upon reaching the pole, Scott wrote in his diary, ‘Great God! This is an awful place.’ He and four others died on the return trip.

Truckee resident Grant Korgan hopes to have a more successful outcome than Scott. Korgan, who suffered a severe spinal cord injury in 2010, is attempting to become the first adaptive athlete to reach the South Pole. His goal is to arrive at the bottom of the earth on the Scott centennial after pushing himself 100 miles in a sit-ski over 10 days. For Korgan, who barely has the use of his legs, the dangers in Antarctica are multiplied — less moving body parts to keep him warm, and the inability to feel the onset of frostbite in his legs. Echoing Kershaw’s sentiments, Korgan said the journey is worth the risk.

‘The world needs stories like this, of the enduring human spirit, of risk through any difficulty and achieving goals,’ said Korgan, who left Dec. 29 for Chile and hit the polar ice on Jan. 7.

Korgan is aided in his mission by polar explorer and Squaw local Doug Stoup, who in 1999 founded Ice Axe Expeditions, which leads trips to Antarctica and Norway. Although Stoup has been to Antarctica 26 times and the South Pole 10 times, he said guiding Korgan will be his most challenging adventure yet.

‘This is something I’ve never done before; it’s my most ambitious,’ he said. ‘With him not having feeling in one or two legs, it presents a lot more problems. We are going to be living in a freezer. There is no warm place to go to, no lodge or fire.’

A documentary about Korgan’s expedition, ‘The Push: A South Pole Adventure,’ will be out this fall. Cinematographer Tom Day and photographer Keoki Flagg, along with guide Tal Fletcher — all from Squaw and Truckee — are also on the polar ice as part of the Push team.

Despite Stoup’s many accomplishments in the polar region — the first American man to ski from the Antarctic coast to the South Pole; the first to ski and snowboard down Vinson Massif, Antarctica’s highest mountain — he is far from finished with the continent.

‘The first moment I stepped off the plane onto the ice runway, it totally blew me away,’ he said. ‘It’s this amazing place … It gets underneath your skin.’