Through Headwaters Science Institute, students don’t spend their days in the classroom memorizing things like the Krebs cycle or the periodic table. With the natural landscape of Donner Summit serving as an outdoor classroom, student scientists find themselves in a hands-on learning environment far more engaging than listening to a teacher ramble on about the scientific method. This innovative approach started when founder Megan Seifert heard a student say that science was “so cookbook.”

She realized that in school, kids were solving questions that had already been answered. There was no challenge, no discovery, no curiosity. So she set out to rewrite the book on science education. The goal, she said, is to drive the kids toward asking questions they won’t know the answers to.

“I wanted to simplify the process,” Seifert explained.

A Ph.D. who had planned to stay in academia, Seifert decided in 2014/15 to make a change. With a degree in zoology, the Washington State University graduate had always been passionate about science, the environment, and the natural world that surrounds us. Her work had led her on travels throughout the country, and eventually to Truckee/Tahoe, where her husband became a teacher at Donner Summit’s Sugar Bowl Academy. Since her husband was so content in his new position, Seifert decided to make the jump from academia into something with more permanency.

Throughout the years, she had seen a trend in which students considered science, well, boring. She often heard students expressing the belief that everything in science had already been figured out and that there was nothing new to learn. She realized that the science typically taught in schools is really the “history of science,” while in reality science is an ongoing, ever-changing thing.

“Schools use it to check off a box,” Seifert said. “I wanted to get kids better connected to science.”

She pulled out of the academic world, went to a San Francisco school-teacher friend and said, “I have an idea.” With that, Headwaters Science Institute was born.  She “borrowed” her friend’s class for a test run of her science teaching concept, which focused on the process of science, asking questions and doing research. The small class of about a dozen kids found themselves on a field trip to Donner Summit, where they became fully immersed in the science of the surrounding outdoors.

Seifert intended to get the kids out of the classroom and into nature to look at the space around them, asking questions like “What kind of population would be in this area?” and “How is this different from that?” Like life, she said, science is a process. Introducing students to that process was a way to pique their interest in what was otherwise widely considered a boring subject.

Every place holds questions “even if it’s just a little patch of trees near their school,” Seifert said. “It doesn’t have to be a huge preserve. All of it is important.”

She recalled one school in Reno — where schools can have up to a 40:1 student/teacher ratio — that was located across the street from a park right on the Truckee River. “Almost none of those kids had ever been to that park, had ever been really to the Truckee River,” Seifert said. It was the perfect outdoor classroom right outside their window.

“You can’t take 40 kids and one teacher to the Truckee River and expect that they’re going to be OK,” Seifert explained. She regularly works with local scientists and UNR grad students who assist with Headwaters programs. And the teachers are learning just as much as the students: The goal is to educate them to the point of being able to run such a program by themselves, with the objective of teachers taking the program reins a little more each year until they are ready to lead solo.

Years after borrowing her friend’s class, Seifert’s program has evolved to include in-class workshops, off-campus field trips, and a number of Donner Summit-based summer camps, including a STEM-based camp just for girls. Her program has become a learning component in places close to home, like Truckee and Reno, throughout California, and in other states as far away as Pennsylvania and Maine. 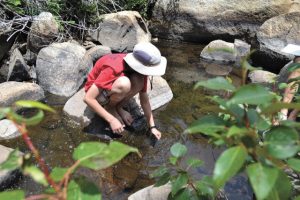 For Seifert, it’s a delight to witness the innocence and wonder of children as they explore the world around them and pose various questions to which they work to seek out answers.

“We allow small failures and that really makes it theirs,” she said, noting a sense of pride the kids feel as their questions eventually get answers.

She recalled working with a group in an ash-filled meadow following the King Fire. The students sought to determine how much ash had fallen in the meadow — no easy task but not impossible. They took square sample sections called quads and were counting the pieces of ash in each when one student challenged Seifert’s own work, asking, “Are you being careful? I think there was ash behind that piece of grass.”

Headwaters has now been around long enough that Seifert is seeing students who attended her summer camps as children now pursuing science careers. Kids who by the last day of summer camp might have said, “I never thought I’d like science,” are now seeking letters of recommendation from Siefert as they go off to college to study the field of science.

And Seifert has her own little budding scientists following in her footsteps: her son Griffin, 8, and daughter Mari, 6. A perfect blend of “pretty, pretty princess” and nature girl, it’s not unusual for Mari to be out and about collecting bugs while sporting a tutu. And Griffin left camp scientists with mouths agape at Headwaters’ Serene Lakes camp this past summer when he asked during a field study on fish food, “How many replicates do you think I need?” Not the typical question coming from an 8-year-old.

Local supporters and business partnerships have been a huge component in the Institute’s success. Entities like the Martis Camp Foundation, the Truckee Tahoe Airport District, and the Rotary and Soroptimist clubs have been key supporters of the Headwaters mission.

“One of the things I think is super important about environmental ed is trying to connect kids to the natural world, why it matters,” Seifert said. “You could do a research project anywhere but I really made this push of trying to do outside ones because I didn’t want to lose that part of connecting kids to their environment.”

Headwaters Science Institute brings kids into a natural environment that many have rarely or never experienced firsthand, but they help them to closely study some aspects of that setting. This, Seifert hopes, will help them make the connection between human activities and our environment.

“We can’t expect kids to grow up to care about the earth if they don’t have opportunities to connect to nature when they are young,” she said. “We hope that if we expose enough kids to this experience, they can become not just scientists, but advocates for sustainable practices and policies when they grow up.”