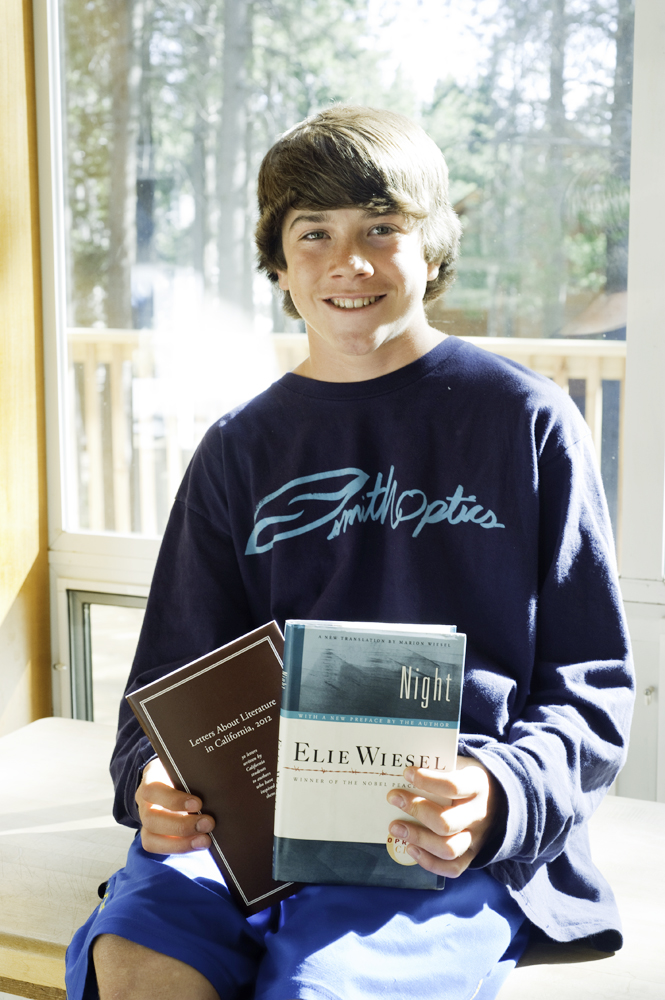 Xander Guldman, 14, is a Truckee kid who’s known for his skiing. Now he will be known for his writing. This year, Xander won Honorable Mention for the State of California in Letters About Literature, the national writing contest put on by the Library of Congress’ Center for the Book, where kids write to authors of books that moved them. Seventy thousand kids entered this contest! Xander wrote to Elie Wiesel, the Nobel Prize–winning author of “Night,” a book about surviving a cruel and desperate year in a concentration camp during WWII.

“I found myself walking down a street in the rich part of Sao Paulo, Brazil. I was 11 and by myself. As I neared one of the many expensive hotels on that street, I saw the silhouette of a young woman leaning against the hotel’s outer wall. As I got closer, I noticed that it wasn’t just her. She had a baby on her lap as well. I wanted to do something for her. I could tell she was desperate. But I knew I didn’t have any money with me. As I passed her I gave her what I could: a smile. I wanted a smile back. But she only put her hands out. As I walked away, I had a hollow feeling in my stomach. What I gave was not enough.”

Every time I read Xander’s letter I feel a rush of curiosity and I want to know what it takes to do something so well you win an award.

Xander compared writing his letter to taking a winning run down a mountain in a competition: he anticipates, then he focuses, then afterward he is excited and relieved. “Most of all,” he said, “I have to be myself. I ski how I ski and I write how I write.”

I know what you’re thinking: Xander makes writing his letter sound extraordinarily easy. But it wasn’t. He revised it 10 times. He felt pain for how fragile lives are. The topics made him squirm.

Xander’s mind tensed as he read the horrific events in “Night,” but he said, “Letting my thoughts and feelings loose on the paper felt great.”

Xander wrote about how even well-intentioned people cannot give enough to others in a world full of problems. But as he dug deeper into the dark history of WWII and revised his letter, he unearthed a bit of hope — if you ask questions and listen to the answers, you can come closer to giving enough.

This concept really inspired me. I hardly ever ask questions that might lead to more than a one-word answer. But the other day my grandpa showed me a picture in an old photo album. Instead of saying, “Oh, that’s nice,” I asked him about it. With that one small question as a spark, he told me about his family, their diner in Merced, and the Japanese internment camps he and his brother would go play in.

Xander said that telling stories makes him feel important, and he sensed some release too. My grandpa felt good telling his stories also. Personally, I don’t like it. I try to answer quickly to get it over with. I feel too exposed.
An important part of asking a question is listening to the answer. You need to be ready for what’s about to come. Xander said he’s usually not too afraid of answers. When Xander asked his grandpa about being in WWII, he answered by telling about the candy rations. Xander had to really dig to get the hard stuff.

Xander ended his letter to Elie Wiesel with: “Listening is necessary. It can oftentimes be a good experience, but in many cases it is not fun at all. I can’t imagine what the woman in Brazil would have said if I had asked [about her life].”
Thank you, Xander, for inspiring me to ask bigger questions, listen to the answers, and remember your words: “Every single person has a story. Every single person has something to tell.”

I found myself walking down a street in the rich part of Sao Paulo, Brazil. I was eleven and by myself.  As I neared one of the many expensive hotels on that street, I saw the silhouette of a young woman leaning against the hotel’s outer wall.  As I got closer, I noticed that it wasn’t just her.  She had a baby on her lap as well.  I wanted to do something for her. I could tell she was desperate. But I knew I didn’t have any money with me.  As I passed her I gave her what I could: a smile.  I wanted a smile back. But she only put her hands out.  As I walked away, I had a hollow feeling in my stomach.  What I gave was not enough.

In your book, Night, you describe seeing two times when a material gift was not enough—in fact, it was destructive.  First, you saw a bystander throw a crust of bread into your train. The man watched “in interest” as starving men fought over it like animals.  You were sixteen, only three years older than I am now. Second, you were on a ship and witnessed an “elegant Parisian lady” throw coins to native children in Aden and then watch, amused, as two boys strangled each other over the offering.

In his essay, “Rocks in the Sun,” which won your foundation’s “Prize in Ethics” award, college student Jonathan Callaway writes about his experience with not giving enough. I felt a connection to his essay, because he felt the same hollow feeling I did after not giving enough.  He was distributing 55-pound bags of cornmeal to the starving people of Haiti. He was left with 5 bags of cornmeal and 5-dozen Haitians. He didn’t want to choose who would get the last bags, so he closed his eyes and held out the food. An old woman, who did not receive a bag, told him in Creole, “If you really knew what it felt like to starve, there would have been enough for all of us.”

So many small—but significant—changes have occurred in my life in the few days after I read Night.  I realized I had never asked my grandfather about his experience in World War II. I knew he was a Jewish boy in Europe during the time but that is all.  I had never asked.  My grandfather is a man who is not a big fan of telling serious stories, so when I open-endedly asked him about his experience, he answered by telling me about the candy rations.  I had to pry to get any serious answers, which I eventually got. In the ½ hour I listened to him, I learned, among other things, that his father had sent his mother and him to England when rumors of Hitler’s plans reached him.

The next morning, I received an email and printed out three pages of WW II stories. I was surprised and touched that he had given more thought to my questions. I think he was surprised that I had asked for his stories because, to tell the truth, I haven’t listened as closely as I should have to many stories he has told.  As I read his letter, I couldn’t believe the detail he remembers about life in England, like “the radishes were like worms with leaves on one end” or “the ancient and incompetent Dr. Wilson, who, apart from rashes and broken bones, had only one diagnosis: appendicitis.”

This letter brought me closer to my grandpa than I’ve ever been before.

I knew my best friend’s grandmother and grandfather were both in concentration camps during WWII. I knew that much. My friend would often say how his grandfather’s skull was crushed as a form of torture. He wouldn’t say a lot, as I don’t think he knew a lot.  I wanted to know more, so we borrowed an interview that the Shoah Foundation conducted with his grandmother, Gitta Neumann. I thought it was powerful to see your story coming from another person’s mouth.

It was devastating when she described the closeness between her family and then, in less than a year, how it was all obliterated.

I’m hearing more and more suffocating stories of my family’s experience in WWII, incomprehensible stories. There are so many things that cannot be explained. Briberies, mysteries, death, loss, and sorrow. It is overwhelming and part of me wants the stories to stop.  I’m starting to connect everything I’ve heard and read to my daily life. And I can’t stand it. For example, the other night I was eating dinner with family friends and I looked at their baby and momentarily pictured that baby as one of the many whom you described in your book were thrown into the air and used as targets for Nazi soldiers.  I couldn’t handle the image and so I looked away.

When Jonathan held out the bags of cornmeal, he had to turn away. When your dad was being beaten, you turned away.  By turning away, though, I think it can show compassion, too.  The situation causes such pain that you turn away. If you can look on it and handle it, then you’re either a terribly strong person or, more likely, you just don’t care.  The man who threw the bread into the train car did not look away. The woman who threw the coins into the water in Aden did not look away.

My grandpa ends his letter to me by saying, “By now you should be asleep so I will turn off the MEMORY spigot. In the wildly unlikely event you want to hear still more about How I Won the War by Growing Radishes, let me know and I will dredge more rubble from the memory bank.”

Listening is necessary.  It can oftentimes be a good experience but in many cases, it is not fun at all.  I can’t imagine what the woman in Brazil would have said if I had asked.

But through your story, Mr. Wiesel, I have realized that there can be enough. If people have the motivation and courage to listen; if they have the compassion to act—even if it’s just feeling bad inside, then they can create change.

~ For more information about Letters About Literature, visit lettersaboutliterature.org and calbook.org/lal.html. Comment on this column below.