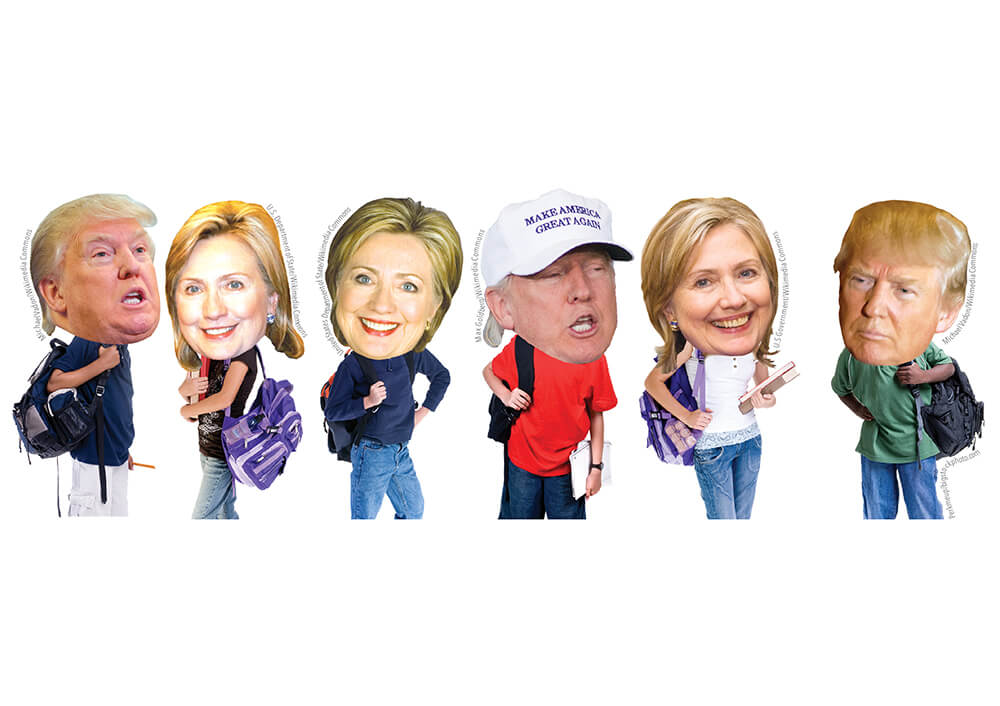 Every Sunday night my extended family has dinner at my grandparents’ house in Reno. Around the table sit a Libertarian, two fiscal conservatives, a social conservative whose concern is Israel, a labor democrat, social justice democrats, a non-voter, and one who votes across party lines.

This is the most politically diverse a dinner table can get. And yet the one topic that never comes up is the election.

I know this silence is because my close-knit family doesn’t want to upset anyone. But I am almost 17 and all I want is to feel the energy of this election. I want opinions, data, testimonies, and research — all of which can lead me to what I seek most: my own political voice.

For the past nine years, I have been politically involved — but by my parents’ side. With them, I canvassed in hot Reno neighborhoods for Obama, painted postcards for fundraisers, and stood at the Safeway intersection, knee-deep in snow, holding up a sign reading Obama’s name. I even walked into the voting booth, where my mom handed me the pen to bubble in that incredibly important circle. These experiences pushed me to be aware of the political process and made it normal in my life.

In August, I experimented using my new independent political voice: I signed up online to canvass for Hillary Clinton in the swing state of Nevada. While going through the somewhat tedious sign-up process, I gained excitement and a sense of power. However, it concluded with an anti-climactic “Thank you” email and I’ve received no notifications from the campaign since. I felt like they didn’t need me — why else wouldn’t they reach out?

It was not until early September that I found a place to grow my maturing voice. My school, Sugar Bowl Academy, offers a trimester-long class called Red State Blue State. This is not a standard Government or US History course, both of which are offered in high schools around the country. In this class, us students sit around one big table and submerge ourselves in politics. We analyze columns from conservative and liberal sources, constantly aware of any bias in the reporting. We discuss Trump and Clinton’s latest triumphs and missteps. We listen to each other present on swing states and the 17 California propositions; we evaluate polls; and together, we attempt to understand the election and all its pieces. One part I am particularly interested in is both California death penalty propositions; I think it’s fascinating that America is one of the last developed countries still enforcing capital punishment.

“By way of studying the electoral geography of swing states we can see how and why voters in New Hampshire, Virginia, or Nevada share concerns, but approach politics in distinctly unique ways,” he said. “An election season is a fantastic time to be exposed to and unpack disparate viewpoints from across the political spectrum.”

Because of this class, I have found my voice and learned that, no matter how loud it is, it’s meaningless unless I have knowledge behind it. Knowledge that I am gaining through my involvement in Andy Knox’s class.

With this comprehension, I feel powerful. I am powerful when I talk to my parents about Proposition 56 and tell them what tax increase on tobacco could mean for kids: a percentage of the revenue will go toward tobacco prevention education in schools.

I feel powerful when I see a television ad endorsing a candidate and I can explain to my sister the significant influence of money on politics, insight I gained from the documentary we watched in class called Power in our Pockets. I feel powerful when I interact with the map on the website 270 To Win and make educated guesses on which way Florida, Ohio, and Colorado might swing. I even feel powerful when I listen to other people’s opinions with an open mind.

I wish every school offered an election class. The youth of this country would be informed, aware, and suddenly able to share their voices with the people around them. Kids would be able to start a conversation at their dinner tables. And most of all, they would be able to tell their parents and other adults in their lives to take political voice seriously, honoring it by expressing themselves maturely and listening to the other opinions around them.