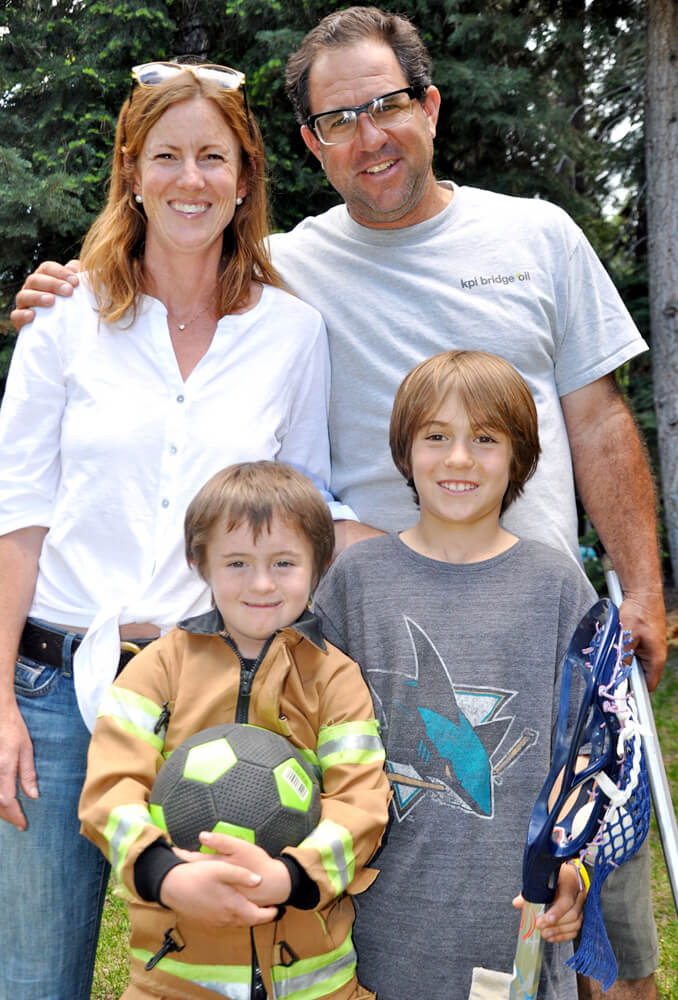 When you’re playful, you’re free. You’re not worrying about doing well. You laugh and tag along with your imagination.

After our first question, Finley asked to go outside. His dad asked him why. He said, “To play!” I get it. Interviews can make a kid feel cooped up.

Luckily, Finley stayed. In the one hour we were with him, he changed into a fireman costume, a ghost costume, and a Spiderman costume and played his guitar. Finley asked to play rock-paper-scissors. Normally, you play that game to decide who gets something. Finley wanted to play because it’s fun, so he and Eleanore played. Then Finley zoomed his monster truck across the floor, wrestled his brother, Olin, age 9, and made us laugh a lot.

I can’t believe this, but some people try to be playful by being sarcastic or laughing. Not Finley. His playfulness sometimes comes out as compliments. They come from his heart, and they make his family laugh in a loving way, like when he told his dad during the interview, “Hey, Dad, you’re skinny.” Or when he tells his mom Alex, “Ooh, Mom, good job cleaning the kitchen!”

Finley made me feel welcome and happy.

But Alex doesn’t agree with Down syndrome stereotypes, so she made sure we knew that Finley isn’t always happy. Olin agreed: “If Finley doesn’t get his special cup — the one from Chicago with the straw on the outside — he can get pretty whiny.”

And when he doesn’t win a baseball game, he puts his head down, but only for a bit. Finley is known for turning his feelings around fast and getting back to playtime.

ELEANORE
Tahoe is competition. Everywhere I look, it’s there, and it usually comes with a need to compare. We kids judge each other’s equipment, how far we ran, what our times were biking up the summit or swimming across the pool, which route we climbed, who made club or all-stars and who got cut; whether we skied off or on the groomers; whether we made top 10 or the JOs (Junior Olympics), or whether we did anything active that day at all! And that’s only sports.

Competition by comparison is around us, on top of us, even in us. It seems to be who we are. But in conversations I’ve had about competition while writing this column, I realized that true competitors don’t compare. They are just as happy with others’ successes as they are with their own. True competitors like to see personal records anywhere, from anyone.

Finley’s family loves competition. They are one of the sportiest families I know. When we drove up to their Tahoe City home, we saw lacrosse sticks, soccer balls, and basketballs strewn about the yard. Inside, we saw pictures of the family at baseball games. For the first 10 minutes of the interview we watched a video of Finley’s big air competition at Squaw and Olin’s hockey game. Finley loves his name, but if he could choose another one, it would be Jermichael Finley, a Green Bay Packers football player. And Finley’s imaginary team is always with him. He constantly says, “I got my guys.”

The Silvermans compete, but they aren’t only about the win; they like the journey and to play. Dad Ralph says that Finley’s presence has removed all the measurements and tendencies to compare. “The goal posts are washed away.”

As Finley grew up and first crawled, then walked, talked, and finally skied, the family learned that things happen when they happen. And what does happen doesn’t have anything to do with other kids’ timelines. Ralph says that’s the biggest thing about raising Finley: “It’s freeing.”

I feel so good being around the Silvermans. They aim so much love-pride at each other, cheering for and appreciating each other’s triumphs. This is who they are.

While we watched the videos of the boys’ sports, Finley cheered, “That’s O-ee! O-ee’s good!” Olin shined when he saw Finley’s big air. Finley’s Squaw Valley Mighty Mite coach, Michelle Prado, said, “Finley loves going from top to bottom without stopping, but he also loves getting on the coach’s radio on the Funitel to tell his family how much he loves them.”

Playing Without Goalposts
Arts & Culture
12:00 am

Playing Without Goalposts
12:00 am