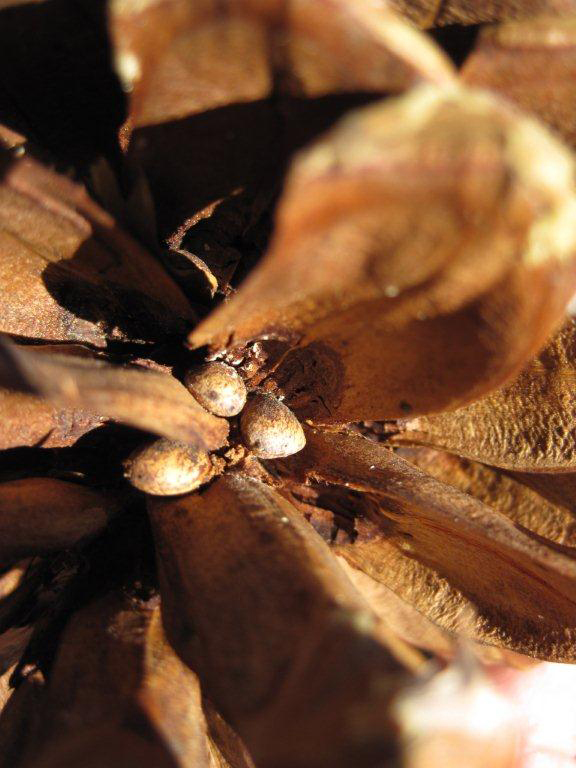 We all complain about it. It covers our cars and decks, irritates our eyes, our noses, and sometimes our lungs. At times it almost seems as if a crop duster had flown over our homes and unloaded a thick layer of yellow pollen. But really, all we’re experiencing is a byproduct of nature doing its thing. So stop whining and give the trees a little respect, would ya? They’re just trying to reproduce.

Yes, that’s what pine pollen is all about, the male and female getting together. Although pine trees (in our area, ponderosa pine and jeffrey pine) have male and female parts, they can’t self pollinate, and need separate genetic material to produce offspring. In the spring, trees grow both male and female cones. The male cone (a paperclip-sized furry, reddish/brown, phallic shaped cone) grows in groups on the end of twigs. The female cone (what we picture as a regular pinecone) grows on branches and is attached by a stem. On a windy day in late spring, the pollen (a protective container for a sperm cell) is released from the male cone, lands between the scales of the female cone, and fertilizes the two seeds embedded in each scale — conifer copulation, so to speak. Because the male pollen is relatively large and heavy, it doesn’t travel far compared to other smaller, wind-disseminated pollens. The fertilized seed falls to the ground and mixes with dirt, sunshine, and water, and the entire process occurs again.

While we blame our beloved pines for causing runny eyes and noses and congestion in our heads, pine pollen is not usually the allergy culprit. According to U.S. Forest Service Vegetation Specialist Scott Conway, only 2 to 3 percent of the population reacts negatively to pine pollen. The more likely offender is grass pollen, which is being blown about at the same time that pine pollen flourishes. Because grass pollen is too small to be observed by the human eye, the more visible pine pollen gets the bad rap.

Another tidbit about pine seeds is that they provide nourishment for a lower portion of the food chain — squirrels and chipmunks. We’ve all seen the remnants of chewed-on pinecones on the forest floor, or spied a squirrel with a pinecone in its arms, madly gnawing away as if munching on a buttery corncob. These small mammals help to move seeds farther away from the parent tree than the distance that gravity alone would carry them, creating better spacing between pine trees.

One might ask if fir trees reproduce like pines, and the answer would be yes. However, the female fir cones look different than pinecones and stand upright on the tree versus hanging down. Plus, fir seeds have wings that enable them to travel in the wind farther than pine seeds. The seeds spin in the air, twirling to the ground like helicopter blades.

In a Torpid State of Mind