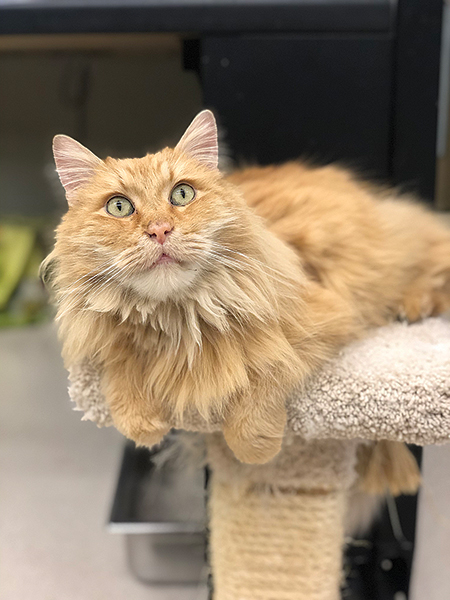 A ball of golden fluff is curled up in a corner behind a desktop computer in the offices of the Humane Society of Truckee-Tahoe. After a bit of coaxing, Gwen takes a little stretch and saunters out from behind the screen, putting her princess-like prowess on display. A few feet away, Smokey rests upon another desktop, her gaze like a laser beam zeroing in on Gwen.

HOME FREE: Cheese (left) and Billy Joel (right) were part of the initial group of felines to be trained in the Cat Pawsitive program at the Humane Society of Truckee-Tahoe. Both have since found their fur-ever homes. Courtesy photos

“This is big,” says HSTT adoption specialist Maria Marsh, noting that just days before Smokey would have bolted to safety under the desk at the very sight of Gwen.

Both cats are part of a group of six participating in the new Cat Pawsitive program, of which HSTT was selected to be a part. The brainchild of cat behavior expert Jackson Galaxy, host of television show My Cat from Hell, Cat Pawsitive was created with the goal of increasing the adoptability of shelter cats. Sponsored by greatergood.org, the program is now in its fourth year and has grown from its starting number of six to currently welcoming 50 participating shelters — ranging from smaller private facilities to larger municipally run centers — with the goal of expanding that number each year.

“The program is designed to increase confidence in the shelter cats,” Marsh told Moonshine Ink in a recent interview, noting that some cats do in fact have issues in that department. “Confident cats are more appealing to the public when they visit. They allow more interaction with the public or seek out more interaction with a member of the public and they also [better] transfer into a home.”

As head of the program, Marsh completed a round of online training herself before getting things up and running. She is part of the six-member team, which includes Marsh, three dedicated volunteers and two members of the Town of Truckee Animal Services.

“The ideal setup is that each team member is working with one cat at a time, so we should always have six cats in the program,” Marsh explained. “It’s limited to one cat per person because they want to really make sure we’re really investing the time that we have into that cat, and there’s also a bond that develops and a consistency that develops in terms of expectations of movement and the person’s voice and all those things that influence their interaction.”

Cat Pawsitive kicked off at the end of January, with the initial program running through March, although participating felines will remain in program as long as they are at the shelter. As of press time, five such cats had already been adopted. Gwen was one of them.

So, what makes for a confident cat?

“A cat that, when introduced to new stimulants — whether that be a new person, or a new room, a new toy — is comfortable, curious,” Marsh said. “It can’t tell us if it’s comfortable. A lot of the work we do, really with any animal, is based on the animal’s body language … This is one of the facets of the program that they’re increasing knowledge about; cat body language, cat behavior, how to read how stressed out a cat is, and how to interact with cats on sort of that stress scale in a way that’s beneficial to the [cat].”

But not every cat in the program has confidence issues. Gwen, for instance, had no trouble in that area but needed help elsewhere.

“I think it turned out that I got the most stubborn cat,” Marsh said with a laugh. “Gwen is about 6 or 7 [years old] and is set in her ways. She lives in the back offices, so she’s got free run of things. She had a very low threshold — like a person — a low tolerance for people engaging with her in a way she didn’t like. Her way of letting you know was to snap.”

One cat needed help in its coping mechanism when it became overstimulated; another with its manner of acting out when it was bored, which Marsh says is often the reason cats do so.

“[The] whole reason Jackson Galaxy started the program is that there’s all of this training tech and behavior programs put in place for dogs in shelters across the U.S., but there’s nothing for cats,” explained Erin Ellis, HSTT director of community engagement. “This was an opportunity for him to meet with cat behavior experts and develop a program that targets the cats in the shelters so that shelters have a more rounded behavior process for all of the pets coming in, not just the dogs.”

Ellis noted that cats, just as much as dogs, can be made more adoptable.

“It’s kind of breaking those barriers because not everyone believes you can train a cat,” she said. “And it’s not like silly training things; it’s just the cat coming to you when you walk in a room, the cat looking at you, and all of those things that … are making the cat more adoptable and [enticing] to the adopter coming in. It’s that confidence building.”

It could be a baby step, as simple as the cat making eye contact. But it also could be the cat walking over to you upon entering a room, offering up a head bump, following a command such as “watch me,” or even learning how to high-five its human because, as it turns out, cats aren’t that much different than dogs — at least when it comes to training.

As in dog training, Cat Pawsitive uses reinforcers like food treats, pets, and playing with a toy. The key is rewarding on the spot. The positive behavior is marked with a clicker, so that starts to cement in their minds what it is that is continuing to be reinforced.

“If you think about it, we’re trained this way also,” Marsh joked. “When our cell phone dings, we have a trained response and there’s a reward associated with it.”

Of course, there are always a few skeptics when it comes to being able to train a cat. A television news reporter from Reno recently visited HSTT to do a spot on Cat Pawsitive and it was evident he thought it was a bit of nonsense, although it seemed he was thinking more along the lines of circus-style cat tricks, Ellis said.

Since the participants are required to document the cats’ progress by way of journals, photos, and videos, Marsh looks forward to the day when she can share footage of a dainty little feline high-five.