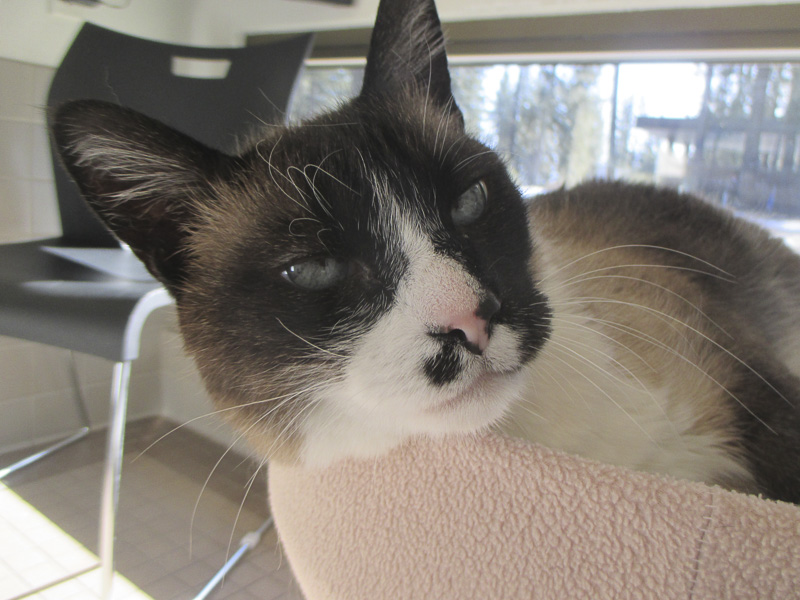 The holidays were good to this cat. My family cut down a tree from the yard (where I am not allowed to roam) and brought it in the house. If that wasn’t cool enough, they put up lights and hung little cat toys from it. I studied the conifer, then made a dive for it. The tree went down. Cat: 1, tree: 0.

It’s been fun having a tree in the house. I like opening the presents and the tree water is the most delicious water in the house. I enjoy batting the ornaments around. The dog and I have come to an agreement. If I bat down an ornament, he gets to chew it up. Would you believe they hung a little stuffed bird from the tree? What do you expect a cat to do? Plus, I found the lights irresistible. I chewed on one bulb until it somehow caught fire. Luckily someone was home and able to unplug the lights before I burned the house down. I hope we keep the tree forever.

My house wasn’t the only place where things were getting broken. The Humane Society of Truckee-Tahoe broke records by finding homes for 76 pets this November. December saw more than 54 adoptions, bringing the yearly total to more than 600 animals. They even found time to spay or neuter 34 animals in November. On Nov. 28, also known as Giving Tuesday, 29 puppies were adopted. There were folks camped out at the door to get the pick of the litter.

One cool cat who would like to join the ranks of the adopted is Pasha. Pasha came to the shelter with his sister Amelia after their person was no longer able to care for them. Amelia has been adopted and now this sweet guy needs his purrfect home. Pasha is a solid 16 pound, 13-year-old boy. He loves belly rubs, sitting on your lap, a good brushing, and long walks on the beach. Pasha is diabetic but it does not slow him down. He is playful and he has a purr like a fine European sports car. A volunteer has sponsored Pasha’s adoption fee, making this handsome guy the deal of the century.

There are a lot of great animals at the shelter right now and they are getting adopted fast. If you are looking for a pet or just a cool place to volunteer, visit hstt.org to get started.

A Passion for Pasha