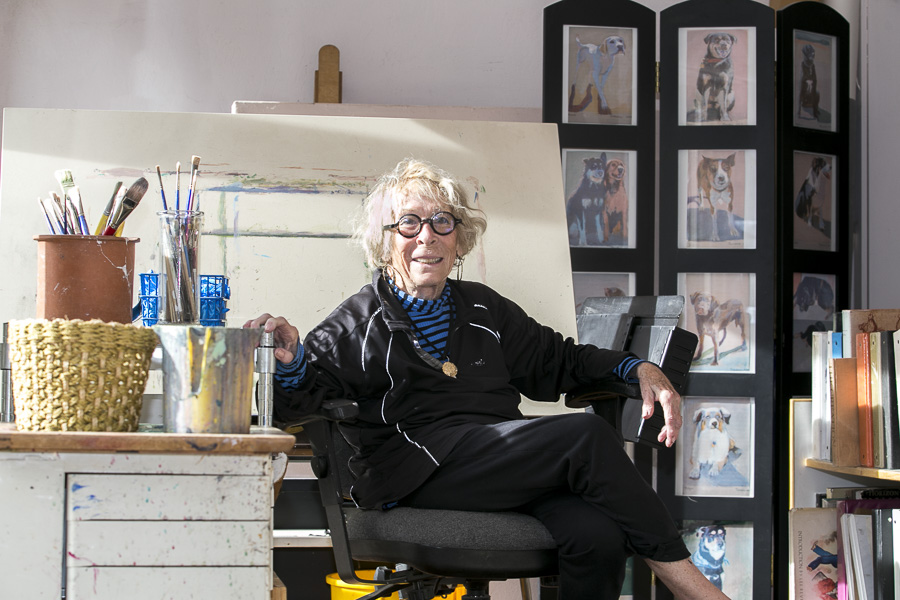 Editors Note: It is with a heavy heart that we announced Anne Bennett passed away in her Tahoe Donner home Sunday, Jan. 7. Bennett was an extraordinary woman and a valued member of her close–knitt Truckee community, she will be greatly missed.

Sitting with Anne Bennett, 79, we speak of Lady Gaga, Tony Bennett, her days as a bohemian, eating more kale, painting, and her sister’s perfect behind. The 19-year-resident of Tahoe Donner appears to be totally with it, but she explains this was not the case three months ago when side effects from an emergency surgery appeared in the form of dangerous brain seizures. The seizures left her in need of full-time care. These health problems and subsequent need for around the clock healthcare galvanized Bennett’s neighbors into providing her with the care she needed.

“We were all there for each other,” a neighbor, who would like to remain anonymous, wrote in an email. “Unfortunately, this way of living is starting to disappear in some parts of our country. I feel it is important we all do random acts of kindness and spread as much love as we can to help one another. It can only have a ripple effect.”

Here’s how we got here, to the point where ten Tahoe Donner residents made sure they had time in their busy daily schedules to help this incredible elderly woman.

Back in September, Bennett was perfectly healthy when suddenly her abdomen “exploded” as a result of built up scar tissue that had accumulated over many years. She was rushed to the hospital for immediate surgery, where doctors told her son she was going to die. Bennett was a fighter, surviving the surgery and returning home after five days in the hospital. Unfortunately, as often happens when elderly people go under anesthesia, Bennett’s brain started doing unusual and dangerous things after her surgery and she ended up in Reno for diagnostic testing.

After 15 days in a Reno hospital, doctors told Bennett that she needed to move out of her Tahoe Donner house and into a facility for around the clock care — enter her Tahoe Donner neighbors who felt strongly that her chances of recovery were much higher in the familiar space of her home, rather than a hospital.

They organized and explained to her Philadelphia-based son that they wanted to bring Bennett home because they felt it would help her “snap out of it.” It was no easy task; they had to prove to the hospital that Bennett would have around the clock attention, and essentially signed her out of the hospital and into their own care. One neighbor had to write a statement that Bennett would have fulltime care with morning, mid-day, and evening visits.

At first Bennett’s neighbors had to hide her keys so she wouldn’t drive, and remove all knives from her home because she was acting irrationally as a result of the brain seizures. For example, while in the hospital, Bennett left and took a cab to check on her pets that were being temporarily held at the humane society.

Today, their shifts caring for Bennett are mainly spent distributing medication, taking her to the grocery store and on shopping errands, and most importantly, spending time with the vibrant woman.

It isn’t just her neighbors who have played an important role in getting Bennett home. The day she was set to arrive home, a few of her neighbors went to her house early to make sure everything was in place. They found her heater wasn’t working and frantically called Mountain Home Center for a repair. The Truckee-based store immediately came to fix the heater and refused to take any sort of payment.

Talking to Bennett and her neighbors it is evident this experience has had a positive impact on everyone involved.  “I’ve been changed by the loving this is coming through. It doesn’t have a name. It comes from people having their own lives while still doing something for you,” Bennett said. “All of these people, for different reasons, gave up parts of their lives to help someone else.”

The care from these neighbors has been selfless, and they are happy to do it, but Bennett has decided to sell her house and move back to Philadelphia to be with her son and grandchildren. The community she has created at Tahoe Donner will miss her spunk and positive attitude, but understand she needs to be with her family. The community won’t be the same without her.