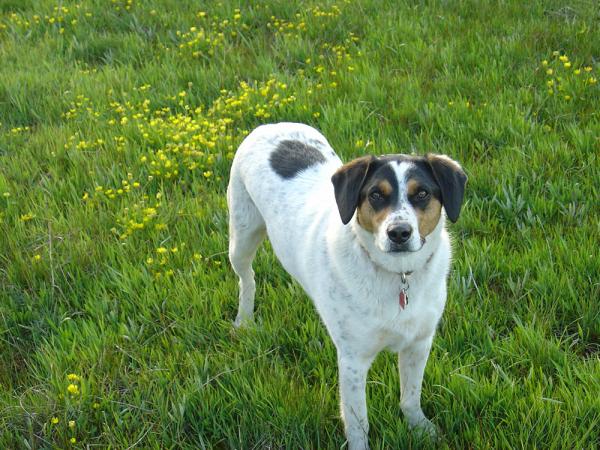 I first met Flip Speckleman in October of 2000. It was my first day volunteering for the Humane Society of Truckee-Tahoe. Adoption days were held in the Safeway parking lot. I spent most of my day holding Flip on a leash, walking him around the parking lot, and trying to make him look adoptable. He reminded me of a beagle I had when I was a kid. Adoption day came to a close, and Flip had no takers. I met Georgia Smith, current volunteer and former HSTT president that day. I remember her wondering what they were going to do with Flip. He had built a reputation as an escape artist, and there was often collateral damage. Flip could have chewed his way out of Alcatraz. He didn’t do well at the shelter. I volunteered to foster him.

I think Georgia knew what she was doing when she wondered aloud about what to do with Flip. I am so grateful she got us together. She was one of Flip’s first friends.

I hope these days we screen our foster homes better. I was living in the laundry room of a house in Tahoe Donner. It was actually great. On cold nights all you had to do was turn on the dryer and you were warm, a little linty but warm. I had four roommates and a Rottweiler, none of whom I consulted about the (foster) adoption. I really should have asked the Rot. I also should have asked our landlord. Flip settled in but he was far from polished. A friend came to visit, and Flip ate his leather jacket. To make it worse, after we got home and discovered what he had done, Flip continued to cough up the occasional piece of leather as a reminder of the act. Ziggy, the resident Rot, taught Flip how to get into the garbage. I came home one night to Flip on my bed with the garbage strewn all over it. Not a great day. Sometime later he chewed up a snowboard boot. Luckily it was the one snowboard boot in the house that apparently no one cared about. One more incident, however, and Flip was toast. He could not be trusted home alone. Flip now went everywhere with me. He even stayed in my car when I was at work. I remember Flip once running out into the street in those early days. A car was coming, and I yelled at him. He was so traumatized by being yelled at that he rolled onto his back and lay helpless in the middle of the road. The car waited while I had to drag him out of the street. This dog had no confidence.

It took about a year, but at some point I realized I hadn’t had to discipline my dog for a long time. I was able to leave him home alone. He came when he was called. Somewhere he morphed from problem child into the perfect dog. His first appearance in Moonshine Ink was in December of 2002, issue no. 2. When Flip started writing this column, he would often conduct “exclusive” interviews with his friends at the shelter. I tried my best to communicate what I thought to be Flip’s opinions. We didn’t do puppies. Flip usually didn’t like them, and puppies were easy to adopt. They didn’t need the press.

Until his health started slowing him down Flip met almost every dog we wrote about. I liked taking him by the shelter to meet new dogs every month. I run into dogs all the time that I know from Flip’s articles. A few of them live in our neighborhood. People don’t know how to react when you meet them and they don’t know you but you know their dog. I hope we helped find some homes and raise awareness. Here it is one more time: Spay and neuter your pets. Adopt from a shelter.

Flip passed away in November at age 12. We miss Flip at our house. He would have made a great psychiatrist. You could tell him everything and he understood, and in his own way he took action. When my daughter was born he was by her side from the moment we brought her home. Looking at pictures of her you can see that Flip was almost always keeping an eye on her.

He wasn’t a tough guy, but you would have had to go through him if you were going to get to her. He had a way of being in between her and whatever new dog or person was on the scene. It was subtle but effective. We used to joke that we could go out for dinner and just leave her with Flip. They would have been fine. He slept outside her bedroom every night.
He was also a great hiking and camping companion. I felt safe at night knowing Flip was keeping an eye open for us. We often hiked the Pacific Crest Trail, and I remember a woman crossing our path one day. As she approached she started talking to

Flip in baby talk and knelt down to say hi. Flip kept his head down and walked right past her. As she walked by, the woman said, “Your dog’s not very friendly.” I just laughed. He was busy. We were on a long hike and he didn’t have time for greeting every hiker. He didn’t growl or bark; he just ignored her. It was classic Flip. On other occasions I remember picking up hitchhikers on their way to a ski resort. Flip would sit, reluctantly, in the back seat staring at the person for the entire ride. If he wasn’t sure about you he might stare, and if he didn’t like you he could definitely give off a vibe. Rambunctious dogs especially were put in their place. Flip always strived for order and dignity. His many four-legged brother and sisters over the years didn’t always live up to his high standards. When his brother got excited and pooped in the back of our car, Flip was horrified. He wanted to jump out the window. I remember the look on his face. He didn’t need to know how to talk because I could read his mind: “Can you believe this guy? You really need to train him because this is embarrassing.”

Flip logged many miles on the PCT and summited many of the local peaks. He spent a lot of time at the Truckee River Regional Park and enjoyed diving off the docks at Donner Lake chasing tennis balls. He was a pain with tennis balls. When there was a group of dogs he would often take the ball, hide and bury it, game over. It’s a great life being a dog in Tahoe, and he lived it to the fullest.

Flip had many friends in his life. My wife, Kacey, was in the top three. Flip was diagnosed with cancer more than a year ago. It was devastating to our little family, but my wife, who is a registered vet tech, gave Flip the best care a dog could ask for. During all this she became pregnant with our second child. As the pregnancy progressed, Flip took walks less and less until he mostly just hung out in the house and around our yard. One day in November he insisted on going somewhere. We went for a short hike, and as soon as we got home Kacey started having contractions. A few hours later our son was born. When we took him home from the hospital he met Flip. We were so happy he made it. The next day Flip stopped eating. He had done his job. That was the type of dog he was.

The bottom line is that we couldn’t have found a better friend and we found him at a shelter. We will miss our Flip.