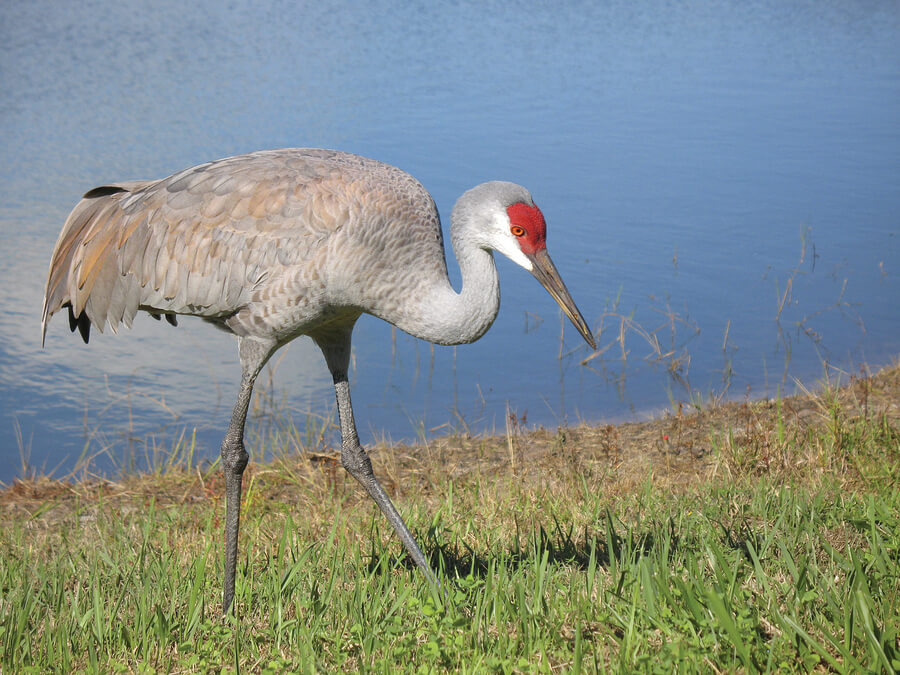 It’s a marvelous thing when you’re walking at dusk and you’re suddenly arrested by a loud noise in the distance moving closer and closer. Your feet instinctively stop so you can pay attention and locate the gurgling sound, which you soon realize is in the sky. Looking up, there it is — well, there they are, hundreds, even thousands, of sandhill cranes flying overhead with long necks stretched forward and long legs trailing behind. V-shaped line after V-shaped line move across the gray-blue and pink sunset in an undulating manner, like ribbons slowly rising and falling from one end to the other.

When I saw this marvelous migration, I immediately wondered, “Where are they coming from and where are they going?” Will Richardson of the Tahoe Institute for Natural Science (TINS) said that this large group had most likely migrated in the fall from breeding grounds in northeastern California, Nevada, Oregon, or possibly even other northern mountain states, to California’s Central Valley, joining cranes from throughout the western edge of North America for the winter. In our area, sandhill cranes have been spotted in Martis Valley, Hobart Mills, Teichert Gravel Ponds, and especially Marble Hot Springs Road in Sierraville, where many pairs can be found breeding each summer. The cranes may be touching down more regularly in recent years, Richardson said, as wetland habitat improves, plus an increase in bird-watching means it’s possible that they’re being noticed more regularly.

There are six subspecies of sandhill cranes, but the greater sandhill crane is the one passing over our area. The sandhill crane gets its name from the Platte River area in Nebraska’s Sand Hills prairie region, a common stopover for hundreds of thousands of cranes on their way north in the spring.

Sandhill cranes, Grus canadensis, are often mistaken for the great blue heron as they are both blue-gray in color and tall (cranes reach up to 46 inches, while herons can top 50 inches), but two characteristics distinguish the crane: the adults’ bright red skull cap, much like a small, round yarmulke, and its straighter neck; by contrast, the heron coils its neck. Cranes are most often seen foraging and breeding in wetlands or grasslands, using their long bills to probe for plant tubers, grains, mice, snakes, insects, and worms. Cranes can live in the wild up to 35 years and are monogamous, with both male and female taking care of the two chicks.

Fall migration occurs September through January and spring migration February to April. Sandhill cranes begin their flights one to five hours after sunrise and end around two hours before sunset, with flight times varying between one to 10 hours. If they are near their destination, they will extend their flight to well after dark. During migration, they can fly up to 150 miles a day at speeds of 13 to 60 miles per hour.

If you spot a sandhill crane be sure to add it to the TINS Big Year Bird Count on tahoebigyear.org, plus check out the renowned Sandhill Crane Festival in Lodi that takes place each November. In Aldo Leopold’s 1949 conservation classic A Sand County Almanac, he writes about the crane: “Their annual return is the ticking of the evolutionary clock … the crane is wildness incarnate.”

Have you seen any sandhill cranes migrating? What regional flora or fauna should we write about next? Let us know, comment below.