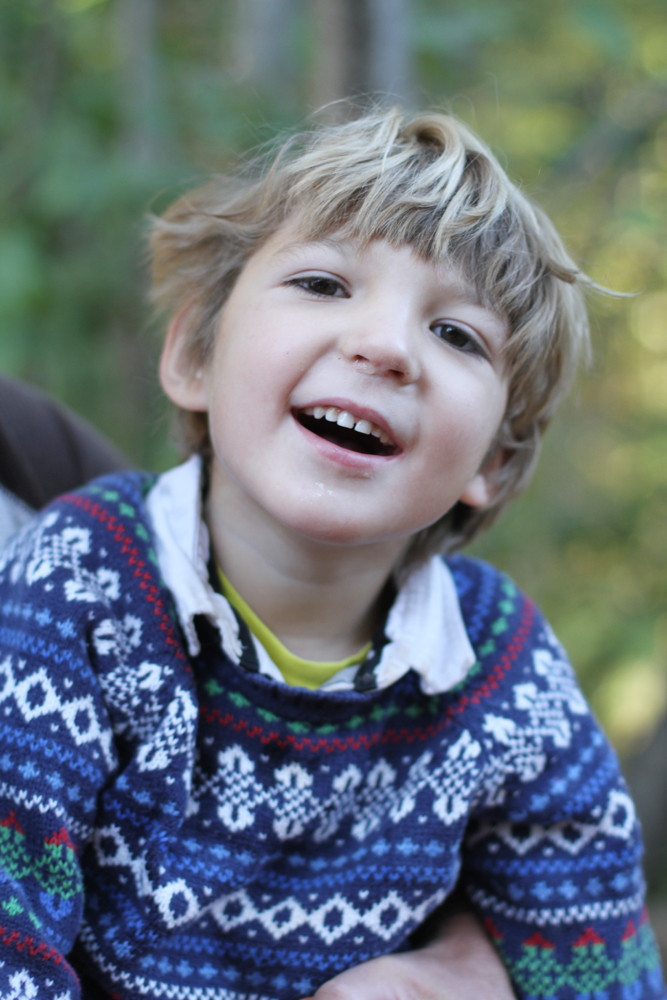 It is the night of Julian Gaube’s fundraiser at 101 Live in Truckee. On this September evening, everyone is excited to say hello to 5-year old Julian, and although he doesn’t understand why everyone is there, he is enjoying giving everyone “knuckles” and then “blowing it up.” He also impresses the crowd with his new walking stability.

After two years of Julian having up to 30 seizures a day, and months of trying endless amounts of medicines and alternative therapies to no avail, Julian’s parents, Kara Fox and Dan Gaube, spent 10 months extensively researching what they now believe will give Julian, who has cerebral palsy and a rare form of epilepsy, a better quality of life — marijuana.

Julian’s Story Julian spent the first three minutes of his life not breathing. In that brief period of time, Julian suffered serious brain damage. At age one, he had a seizure that lasted one hour and 45 minutes, and was diagnosed with a rare form of epilepsy: Lennox-Gastaut syndrome. As a result, he has several different types of seizures, several times a day.

After his first seizure, Julian didn’t have another one until he was 4 years old. Now he has them on a daily basis.

On his worst days, he could have 20 to 30 seizures a day, lasting anywhere from 10 seconds to five minutes. A simple sound such as a dog barking, someone sneezing, or Julian biting into a potato chip can spark a seizure. Cerebral palsy has also weakened the muscle tone in the trunk of his body. Julian has good cognitive skills but shows delays in fine and gross motor skills.

For the past two years, instead of focusing on getting Julian caught up to age-level development, his parents have been struggling just to manage his seizures. But none of the treatments they have tried — from Western medicine to alternative therapies like acupuncture, Reiki, intuitive energy healing, liquid crystals, and theta healing — stopped Julian’s seizures.

But then Gaube and Fox discovered a new type of treatment — cannabidiol (CBD), a compound found in cannabis that has been shown to have medical benefits, but without the psychoactive effect of tetrahydrocannabinol (THC). Strains of marijuana can be grown that are high in CBD but low in THC. Currently, this form of medical treatment is being used to treat such medical issues as diabetes, schizophrenia, PTSD, alcoholism, epilepsy, arthritis, and neurological disorders.

After seeing the results of CBD treatment on other children with seizures, and having the blessing of Julian’s neurologist at the University of California, San Francisco, Fox and Gaube decided this was the next step for their son. Sadly, after speaking with current patients, they realized this new form of medicine came with many issues and intricacies.

“We realized very quickly this is a complicated issue,” explained Fox. “I researched the hell out of it, even contacted a researcher [Dr. Ben Whalley from the University of Reading] in Great Britain who has done studies on medicinal cannabidiol and has seen the positive effects it has on patients with seizures. ”

The High Costs and Complexities of CBD The first step to start Julian on the CBD treatment was to get him a medical cannabis card and Fox a caregiver certificate, which allows her to buy, carry, grow, and administer the drug. The next step was to buy the marijuana, which costs $1,500 a pound. While this is cheaper than the cost of street marijuana, there are additional costs. The strain is delicate, fragile, and harder to grow and care for than street pot. Once Fox obtains the cannabis, she has to embark on a five-hour process of getting it to the right consistency for Julian. Once extracted, it gets mixed with alcohol ($100 a gallon) and olive oil. The liquid substance must then get sent to a lab for testing to make sure the TCH and cannabidiol are at the right levels. Cannabidiol isn’t approved by the FDA, so there are no dosing instructions. Therefore, it’s trial and error on each patient. Julian’s dosage changes as his tolerance increases and as he grows. Finally, since marijuana is illegal on the federal level, it can’t be mailed through the U.S. Postal Service. Fox must drive a sample to Sacramento, receiving the results 10 days later.

Another option would be for Fox to legally grow the plants herself, but this is fraught with its own issues. This strain of marijuana does not make for a strong plant; it’s a very precise operation to grow it properly.

“I kill aloe plants,” said Fox. “These plants are delicate, not hearty, and they are wispy.”

Fox knows her landlord wouldn’t approve of growing weed in the house, and the growing equipment is expensive, so for now buying marijuana is the only option for her family.

Julian Today Within the first week of being on CBD, Julian went three days seizure-free. Now, after being on CBD for only a few weeks, he has many days without a seizure, something he hasn’t experienced since he was 1. On the days he isn’t so lucky, he will only have one or two seizures. Julian is currently attending kindergarten at Tahoe Lake Elementary and has already made strides in his cognitive skills, balance, and attention, and is speaking more words. Just recently, the secretary at Tahoe Lake asked him how he was doing and Julian responded, “I am good.” Using three word sentences is a breakthrough for Julian.

Fox and Gaube have raised $20,000 out of their goal of $30,000 so far. It’s their hope that Julian continues to progress and that soon he will have only seizure free days.

~ To donate to Julian’s CBD therapy, visit giveforward.com/fundraiser/vzx2/rundraiser-for-julian; for updates on Julian, go to m.caringbridge.org/visit/JulianGaube. Comment on this story below.